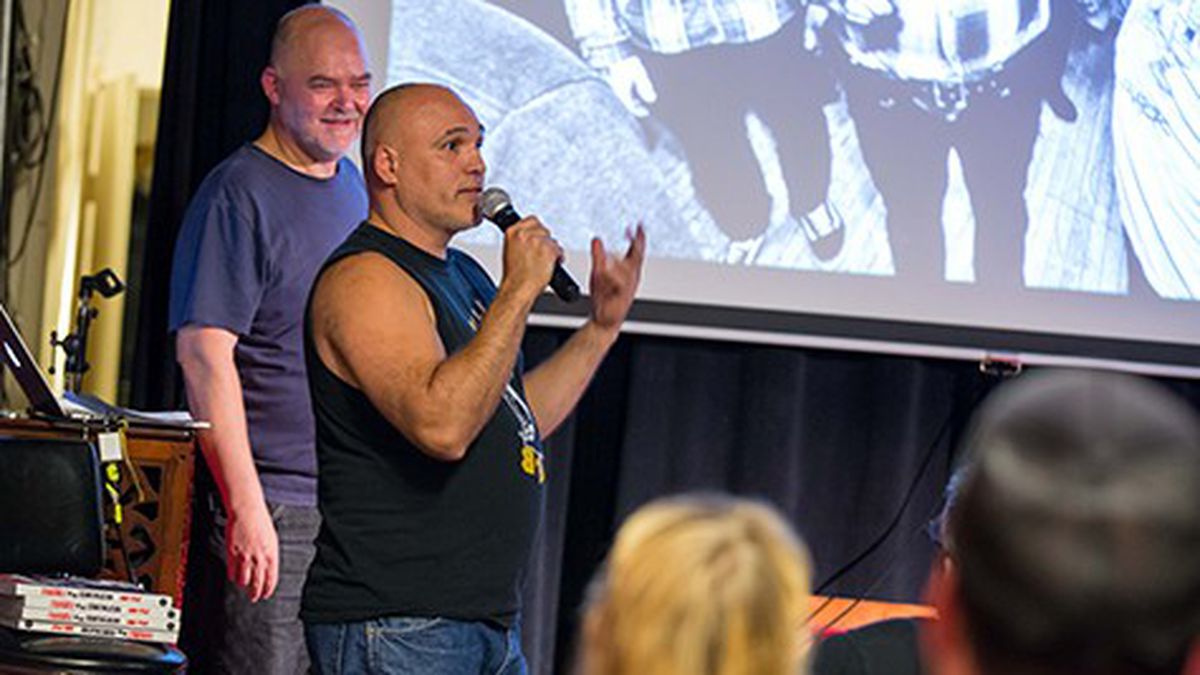 On Friday, photographers Martin Sorrondeguy and Don Pyle presented images that spoke to the latent homosexual content in punk and hardcore.

“Part of being gay and being in the closet is having an observational eye,” said Don Pyle, the Toronto-based musician and photographer. “Partly because you’re always assessing safety.” Pyle stood next to Martin Sorrondeguy, another musician and photographer, in front of a sold-out crowd last Friday night at San Francisco’s Center for Sex and Culture. “If you put our photography together,” he continued, “it would basically span punk from the beginning to now.”

No Tears for the Creatures of the Night, named in homage to the Tuxedomoon song by organizer Scott Moore, was part of the Queer Arts Festival and dedicated to the memory of Will Munro. The late artist introduced the two photographers when Sorrondeguy’s queercore act Limp Wrist played Vaseline, his storied party in Toronto. Last Friday, there were video profiles about Munro, short films of his own, and She Said Boom, a new documentary about Toronto’s prescient and provocative post-punk group Fifth Column. The filmmaker, Kevin Hegge, sounded especially thrilled about the photo presentation from Sorrondeguy and Pyle, who he called “homo legends.”

Pyle started shooting shows in his early teens, gripped by both his zeal for underground rock and social awkwardness. The camera, he explained in his memoir and photo book Trouble in the Camera Club, gave him a sense of purpose. Almost all of his pictures — of early Toronto groups like The Diodes and The Viletones, along with seminal acts such as Patti Smith and the New York Dolls — were taken from the front row.

Sorrondeguy, meanwhile, started shooting punk shows in the mid to late 1980s in Chicago, where he fronted the emblematic Latino punk band Los Crudos. He’s documented the global punk underground ever since, a commitment that yielded Get Shot, a photo book released in 2013.

Last Friday, however, Pyle and Sorrondeguy weren’t lecturing about punk history. Rather, they presented images that spoke to the explicit and latent homosexuality in punk and hardcore, the fraternal underpinning of the genres’ live rituals, and the codes of sexual orientation they learned to decipher in scenes that were alternately hospitable and hostile to gays. Storied punks such as Pyle and Sorrondeguy are often expected to elucidate the genre in broad terms, which they’re uniquely qualified to do, but Friday gave each storied artist an opportunity to contextualize the minutiae with candid, personal details.

“I’d think, ‘Oh, a super acerbic, bitchy guy — he must be gay.’ And he was,” Pyle said, prompted by a picture of The Dishes. Not that it was always so simple. The New York Dolls, whose vocalist David Johansen pouted sourly in another image, famously took to dressing in drag while dating downtown starlets, which Pyle thought was pretty cool, too. As a teenager, he emblazoned his jacket with the Dolls’ lipstick logo.

One particularly arresting image depicted David Bowie, perhaps the decade’s foremost stylist of sexual expression. The thin white duke was well coiffed, kneeling on stage beneath a narrow spotlight, flanked on either side by darkness, and beckoning to Pyle’s lens.

“Mine goes to this almost invisible, underground scene,” began Sorrondeguy. “Okay,” he said, landing on a picture of one concertgoer spitting beer into a performer’s mouth, “the exchange of fluids.” There was little else to add. Everyone cackled.

“It’s implicit … , ” he continued, “the show of flesh, nipples, bodies all rolling around to the music.” In more than one image, Sorrondeguy captured boys butting foreheads in the midst of flailing limbs. “I thought they were gonna kiss,” he said.

In another picture, members of an audience sniffed little bottles. “Something happened in hardcore where a few years kids started doing poppers at the show,” Sorrondeguy said, bemusedly, and he noted a surge in the “leather-daddy look,” with hardcore vocalists donning gimp masks and chains.

Exhibitionism is another trend. The vocalist from Dawn of Humans, a current New York punk band, is known for hanging ornamental garbage from his testicles on stage. Sorrondeguy photographed the show when a member of the audience bared his own penis in solidarity. Likewise, Sorrondeguy shot a Lumpy & the Dumpers gig with nude audience members slathered in slime, an approximation of the band’s song, “Sex Pit.”

When Sorrondeguy discovered punk in Chicago, it was colored by violence and social conservatism. By the late 1990s, Sorrondeguy was out, snarling I love hardcore boys as the vocalist of Limp Wrist. Now, bands with names such as Murderer strike flirty poses when he takes their portraits backstage. “The scene knows I’m gay,” Sorrondeguy said. “And so sometimes I think they gay it up for me.”

She Said Boom touched on J.D.s zine, produced in the late 1980s by Fifth Column member G.B. Jones and Bruce LaBruce. One recurring motif was to photograph straight punks in homosexually suggestive poses without explanation, as if projecting an alternate reality where more punks were out, or at least open to the possibility — a subculture more like the one shown in Sorrondeguy’s recent work.

Some of the most urgent words that night came from Munro. In one video profile, he said, “If someone doesn’t pick up the torch, it’s gone. It’s just on paper, or it’s just on video, and that’s it.”