After buying a dozen Oakland properties, a real estate investor has repeatedly violated city codes — and tenants say the new landlord is trying to push them out with constant construction. 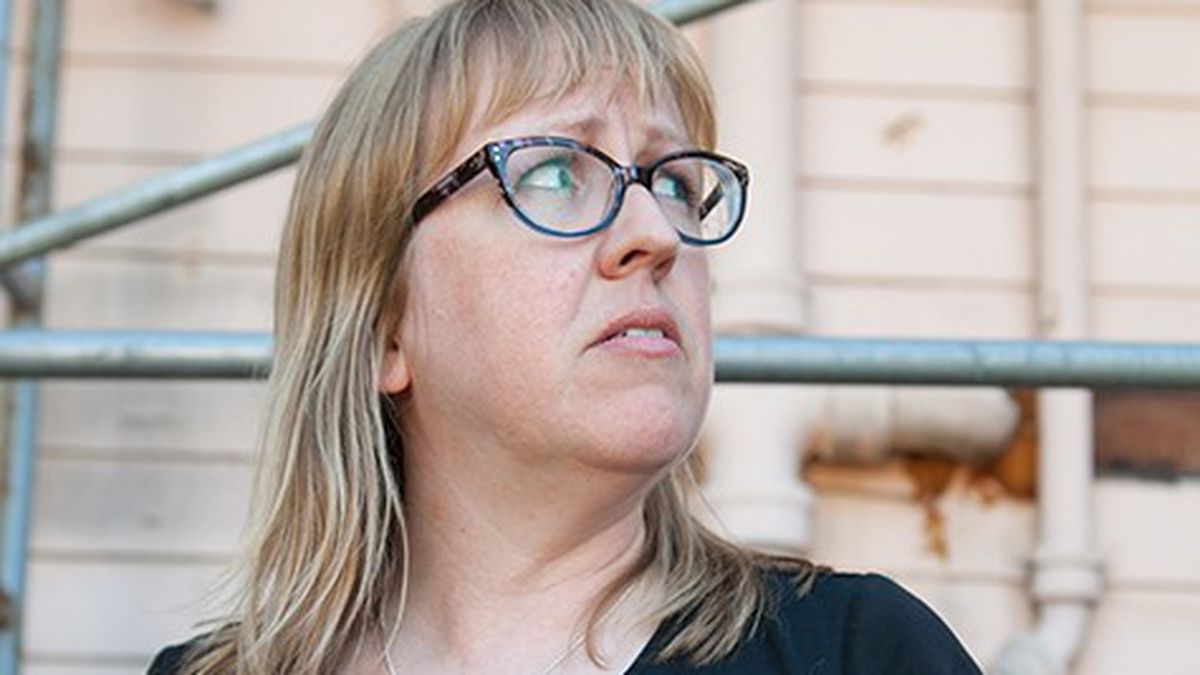 On the morning of September 23, 2014, North Oakland resident Melissa Hennings started getting frantic calls and texts from her neighbors. With no advanced notice, construction workers had shown up to her four-unit building at 374 41st Street and started tearing down the second-story balcony, she said. Hennings rushed home from her job as a healthcare systems analyst in Berkeley. “I was shocked,” she said. “There was no permit and there was construction debris everywhere.”

A month earlier, a real estate investment firm TP Partners, LLC, had purchased her building. In addition, The Apartment Group, a company that has close ties to TP Partners had become the property manager of 374 41st. TP Partners and The Apartment Group have taken over roughly a dozen properties in Oakland during the last year, and tenants from several of those buildings have told me that their construction and renovations projects seem designed to push out residents. In the case of Hennings’ building, the owners have repeatedly launched construction projects without the required city permits, prompting the City of Oakland to issue numerous stop-work orders, city officials said.

Housing advocates in Oakland said Hennings’ struggle is not unique. As more investors purchase rent-controlled properties, tenants have been forced to deal with burdensome construction projects that negatively impact their quality of life and are geared toward long-term upgrades designed to attract higher-paying residents, activists said. And when tenants like Hennings have the resources to issue complaints about unpermitted construction work, safety hazards, and maintenance problems, the understaffed building services division in the city often does little to hold landlords accountable and protect tenants, critics said. At the same time, real estate investment firms that purchase properties can force tenants to pay most of the costs of so-called “capital improvements,” which means landlords impose big rent hikes — even in rent-controlled buildings.

The net effect is that tenants are increasingly vulnerable to displacement. Roughly one-third of Oakland rental units are exempt from the city’s rent control laws, which means that residents of those buildings are constantly at risk of being priced out by huge rent increases (see “How East Bay Tenants Get Displaced,” 3/11). However, tenants in the roughly 60,000 rental units that are protected by rent control aren’t immune from displacement pressures either.

“When properties are transferred, people still have a right to stay,” said Robbie Clark, housing rights organizer with advocacy group Just Cause/ Causa Justa. “But new owners come in with specific profit motives. … And the city just doesn’t have the practices in place to enforce any tenant protections.”

Public records show that last August, TP Partners purchased at least eight residential properties in North Oakland — including a single-family home, a triplex, a number of fouplexes, and two larger properties. The Apartment Group took over the management of those buildings at the same time. The Apartment Group last year also became the property manager of 1565 Madison Street, a 66-unit building just west of Lake Merritt. A different company, First Class Lodi, purchased that property. These three companies, however, are connected — Martin Higgins, owner of The Apartment Group, told me he has a “small ownership position” with TP Partners and First Class Lodi. According to the Secretary of State’s Office, Higgins is also the official agent of TP Partners LLC.

Subsequent tenant-landlord disputes at 374 41st Street and 1565 Madison Street have also raised questions about the intentions of these companies and the city’s process for protecting rent control tenants when their buildings are purchased.

I visited Hennings’ building last week, and it was a mess. Most of the two-story structure is covered in scaffolding and plastic sheeting and it’s difficult to get in and out. The backside of the building, which Hennings previously used as a primary entrance, now has a wobbly staircase that she said her landlord has failed to secure. According to Hennings, she suffered a bad fall there last year after construction workers hired by the new owner did an unsafe job renovating the stairs. Hennings has documented her complaints with detailed photos and posts at OTenant.blogspot.com and on Twitter at @OTenant.

Timothy Low, inspections manager with Oakland’s building services division, told me last week that the owners of Hennings’ building have repeatedly failed to acquire the proper permits, including for the balcony demolition. He said he wasn’t able to confirm the total number of fines and stop-work orders issued at 374 41st St., but said, “the owner is making one mistake after another.”

In one case, Hennings said, the company did major demolition work throughout an entire vacant first-floor unit when it only had a permit for a “minor” bathroom renovation. “It feels like they are trying to push us out,” she said. Hennings hired her own inspector who determined that the rear stairs are unsafe, that there are potential lead and asbestos hazards related to ongoing construction, and that there are “a number of serious habitability and life safety issues affecting this property,” she said.

Hennings’ neighbor in the same building — who requested anonymity because she said she feared retaliation — told me she has had a persistent cold from all of the construction dust and said that it seemed obvious that the renovations were not targeted toward improving her and her neighbors’ living conditions. For example, the property owners are doing extensive work on the outside of the building, but she currently has no running water in her bathroom sink.

Though city inspectors have visited the building on numerous occasions in response to Hennings’ requests, she said they have not done enough to remedy the problems and have failed to acknowledge certain hazards and code violations.

But Low, the city inspections manager, told me that his department has diligently followed up on every complaint made by Hennings. He noted, however, that his division is limited in its ability to address certain maintenance issues. And the agency is dramatically understaffed. Building services receives roughly 6,000 complaints a year, but currently has only ten code compliance inspectors, he said. Before April 2014, there were only six.

Housing advocates say that when property owners repeatedly violate city codes, there should be stiffer penalties — which could also help generate much-needed revenues for building services. City Councilmember Dan Kalb, who represents North Oakland, said the city needs more code enforcement officers to adequately respond to complaints and hold property owners accountable. “The only way you can stop this from happening is to show examples of strict enforcement — of people getting fined.”

At 1565 Madison Street, tenants have had similar complaints about disruptive construction and poor communication by The Apartment Group. But in that building, which is also protected by rent control, tenants are further dealing with large rent increases that The Apartment Group imposed on them last year for “capital improvements.” According to records tenants provided to me, the landlord on July 31, 2014 gave notice that rents were increasing by $106.97 a month, and that the hike would remain in place for five years to fund a range of upgrades, including projects that don’t benefit tenants (like renovations to a leasing office and lobby bathroom).

“The owners want to maximize profits at the cost of people currently living there being priced out,” said resident Joel Aguiar, who is also executive director of Street Level Health Project, an Oakland nonprofit. “Year after year, they are going to try to do as many renovations as they can and pass the costs onto tenants. There are a lot of immigrants, families, elderly people, young professionals — and they are not going to be able to live there anymore.”

The tenants at 1565 Madison have formally contested the increases at Oakland’s Rent Adjustment Board, which is responsible for enforcing the city’s rent control law. James Vann, who is co-founder of the Oakland Tenants Union and has assisted these tenants in the dispute, said the increases should be voided because they violate a clause in the city’s rent-control ordinance that states that capital improvements “must primarily benefit the tenant rather than the owner.”

Vann also argued that the landlord’s documentation of expenses was inadequate and that the owners passed costs onto tenants for work they hadn’t finished, which is illegal. Further troubling, The Apartment Group gave notice of the increases exactly one day before a new city law went into effect on August 1, 2014 that prohibited landlords from requiring tenants to pay for more than 70 percent of capital improvement costs. The Madison Street tenants are paying for 100 percent of the costs, records show. A decision at the rent board in this case is still pending.

“They are ruining people’s lives,” said Rachel Robinson, a Madison Street tenant, noting that, for some longtime residents with fixed incomes and low rents, the $107 rent increase has been a big burden.

In an email, Higgins, owner of The Apartment Group and partial owner of TP Properties and First Class Lodi, defended the managers’ actions at 374 41st Street and at 1565 Madison Street. “TP Partners and First Class Lodi have purchased properties with the intent to improve the properties, where needed, to provide a better living environment for the residents.” He said that 374 41st Street needed significant repairs after years of deferred maintenance. Regarding stop-work orders, he wrote: “We have obtained permits for the work being done.”

Higgins also criticized the tenants there, saying that renovations have been “stalled due to the actions of the residents, adding costs and unnecessarily delaying work.” He further defended the 1565 Madison Street rent increases as legal. The Apartment Group, he added, is no longer managing the properties, and an entity called Bay Apartment Advisors (for which he is a real estate agent and independent contractor) has taken over.