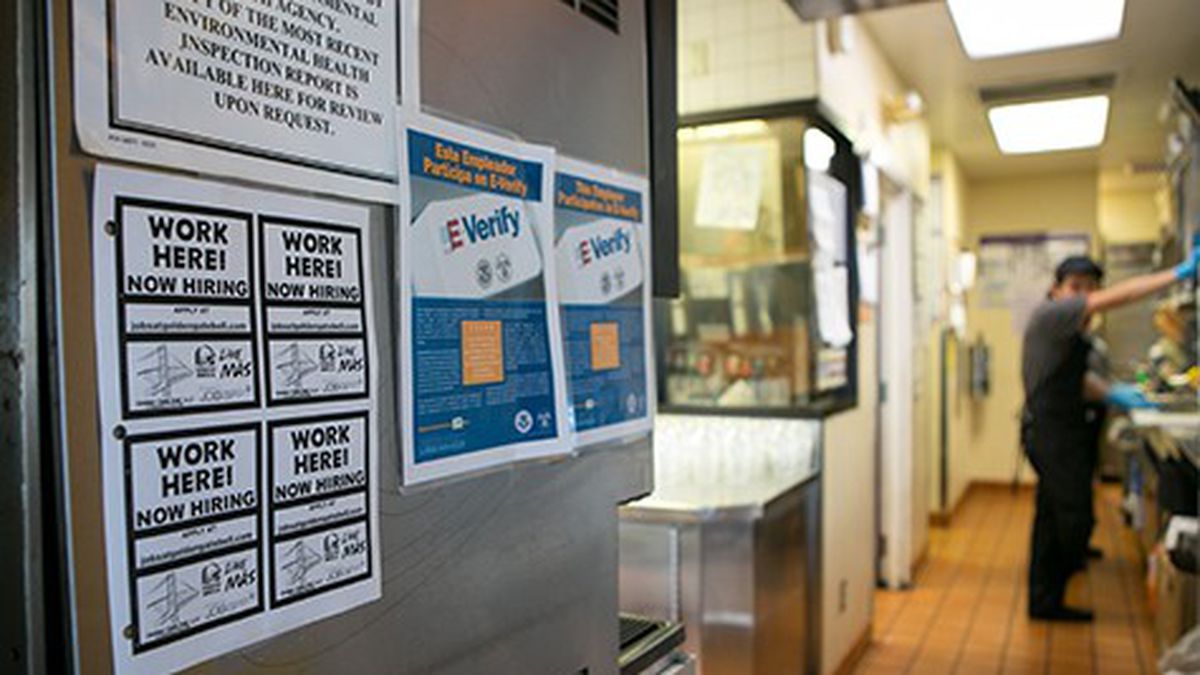 Assistant manager Blanca Alvarez was sitting in the office of the Taco Bell on Bancroft Avenue in Oakland’s Eastmont Town Center, finishing paperwork, when the terrified screams of her co-worker pierced the early morning quiet. It was 1:50 am on February 13, 2013. A gunman had crawled through the drive-through window. “He threw my co-worker to the floor and pulled me out of my chair,” recalled Alvarez in an interview. “He threw me against the wall, pushed me into the floor, saying, ‘Don’t look at me.'” The man forced her on her feet. He smashed the butt of his gun into Alvarez’s skull and ordered her to open the safe.

“I opened the side with the change,” Alvarez told me, explaining that the majority of the restaurant’s earnings for the day were in the other inaccessible side. “After 7 p.m., we can’t open the side with more money.”

Alvarez helplessly told her assailant this. The man drew the gun up to her face and pulled the trigger, but the weapon only emitted the sound of metal jamming against metal. “It malfunctioned,” Alvarez recalled. The robber left her crumpled on the floor. Minutes later Alvarez scanned the front seating area. He was gone.

“I went to the back office to be sure my employees were okay,” Alvarez said. “Then I called the police.”

Alvarez also called the restaurant’s supervisor Rishab Jain of Dolan Foster Enterprises. According to Alvarez, when Jain arrive he asked the employees if they were okay, but then turned to the money. He made employees count the money in the safe. Then he suggested the robbery had been their fault. “He started saying that it look[ed] like we didn’t close the window properly, and that’s why we were robbed,” said Alvarez.

“They don’t even ask if you’re okay,” said Ramon Ortiz, another employee of the 6900 Bancroft Avenue Taco Bell. “Each time the supervisors just ask about the money, and they blame us, saying you didn’t drop the money into the safe in time.”

For more than a year, East Bay fast-food workers have been campaigning for higher wages. The “Fight for $15” is the movement’s slogan. But fast-food workers say the problems they face go far beyond their paychecks. Indeed, fast-food employees, particularly in Oakland, often face extremely dangerous conditions, while toiling long hours for large corporations that refuse to pay a living wage.

In multiple interviews, employees of the Bancroft Avenue Taco Bell spoke of safety hazards, lack of health insurance, denial of compensation for injuries, and a punitive system of rules that has created a toxic workplace. And they say the store’s corporate owners know of these problems, but in their quest to cut costs and maximize profits, worker safety has been sacrificed.

Alvarez today suffers from “post concussive head pain syndrome,” which causes frequent headaches and chronic pain in her torso and back from the assault in 2013, according to physicians’ reports that the Express obtained from the California Department of Industrial Relations. Alvarez filed a temporary disability claim to seek medical treatment in February of last year. After seeing a company doctor, she was able to take 21 days off. She went back to work in December 2013, in spite of continuing medical problems stemming from the robbery. Alvarez obtained a lawyer and her own doctor, but had to fight Dolan Foster Enterprises, the Taco Bell franchise owner, to resume her medical leave. She said some of the store’s employees still call her to discuss the restaurant’s hazardous conditions.

According to Alvarez, robberies jumped in frequency five years ago, after a major remodeling that increased the size of the drive-through window and lowered the service counter, bringing into compliance with Americans with Disabilities Act, but also making it easy to hurdle. The workers were not consulted about the remodeling. “When I saw the store after it was remodeled, I told the supervisors, ‘Oh my god, this is going to be very unsafe, the windows are low and people can get in,'” said Alvarez.

The store has no security guard, despite repeated requests from employees to hire one. Graciella Aguirre, another longtime employee, said she has been robbed three times while at work over the past year. “The managers don’t worry about you, your safety,” she said.

And according to Aguirre, the franchise’s owners and supervisors don’t provide safety trainings to deal with routine hazards either. Employees often hide injuries for fear that management will cut their hours or fire them. “One worker, Elsa, she hurt her hands,” said Aguirre. “Employees get their hands hurt a lot with cuts. Elsa took time off and was going to a doctor, but the company laid her off. We don’t know if she got compensated for being hurt.”

A box of frozen beans recently fell onto Aguirre’s head after toppling from an overhead shelf. In another incident, a thirty-pound box of cheese fell onto her foot, smashing her toes and causing Aguirre to limp for several days. “I didn’t say anything because I was afraid of losing hours,” she said. “I’ve stayed quiet about all my injuries over the last nine years because I’m afraid.”

Ramon Ortiz began working at the Bancroft Avenue Taco Bell when he was sixteen. He’s now twenty. Ortiz said many of the store’s problems are due to short staffing. “The franchisees want to save as much money as possible, but we need to hire more people,” he said. According to Ortiz, workers are often forced to do several jobs, work during their breaks, and work under duress because not enough cooks and cashiers are on shift. “It’s hard to take a break and sometimes you have to punch out and keep working.”

Aguirre said she worked eight hours on a recent Friday, and was only able to take one ten-minute break because of low staffing. “Then on Saturday and Sunday, I punched out for my breaks but I didn’t take them,” said Aguirre. “I didn’t want to be on the warning list.”

Workers say that managers keep a warning list taped to the wall in the kitchen, and if employees don’t punch out for their breaks, even though they often continue working through them, they can be disciplined by having their names added to the list. Multiple appearances on the list can result in termination, the workers said.

A store manager declined to answer questions last week and wouldn’t even disclose the telephone number for Golden Gate Bell Restaurant Holdings, the restaurant’s new owner. Instead, he provided the public relations number for the Irvine-based Taco Bell corporation.

The Express contacted Taco Bell and asked whether and how franchisees are supervised. “Nothing is more important to us than the safety and well-being of our customers and team members,” responded Rob Poetsch, a Taco Bell spokesperson. “We expect that all of our franchisees follow the law and meet our high operating standards, and will take immediate action with the franchisee if and when necessary.”

Most of the Bancroft Avenue Taco Bell’s employees are Latinas who earn minimum wage. Blanca Alvarez was earning $11.50 per hour when she sustained her on-the-job injuries. The store’s longtime owner, Dolan Foster Enterprises, sold the store to Golden Gate Bell Restaurant Holdings LLC, along with 72 other Taco Bells, last September. Golden Gate Bell is a subsidiary of a private investment firm, A&C Ventures. David Grieve, a veteran Bay Area real estate executive, is the president and CEO of A&C Ventures. Randy Rodrigues, a longtime executive and part owner of Dolan Foster, is CEO of Golden Gate Bell.

“We have a lot of pride in our stores,” said Randy Rodrigues of Golden Gate Bell Restaurant Holdings in a phone conversation last week. “Oakland is dear to my heart. It’s the first store we had.” Rodrigues didn’t respond to the specific allegations made by his employees. “What I can tell you is that we’re doing a full investigation,” he said. “I would encourage employees to make their views known.”

Rodrigues also emailed the following statement: “Our organization was founded on a strong belief in people, and their well-being and safety is a top priority for us. These allegations are false.”

Founded in the late 1960s in Oakland, Dolan Foster grew into one of the largest Taco Bell franchise owners in California. In the 2000s, Dolan Foster executives spent tens of thousands on campaigns opposing laws that would have expanded medical insurance to low-wage workers. For example, in 2004, Dolan Foster contributed $16,750 to Californians Against Government Run Healthcare, a political action committee created by fast-food industry giants like Yum Brands to defeat Proposition 72, a ballot initiative that would have expanded healthcare coverage to approximately 1 million low-income workers in California. The FPPC fined Dolan Foster because it failed to disclose its contribution.

Yet despite her experiences, Blanca Alvarez said she wants to recover and return to work. “I’ve been there for so long, it’s my store and those are my people,” she said about the other employees. “The workers there feel like they don’t have a voice. Everyone’s afraid, but I want to fight for them.”