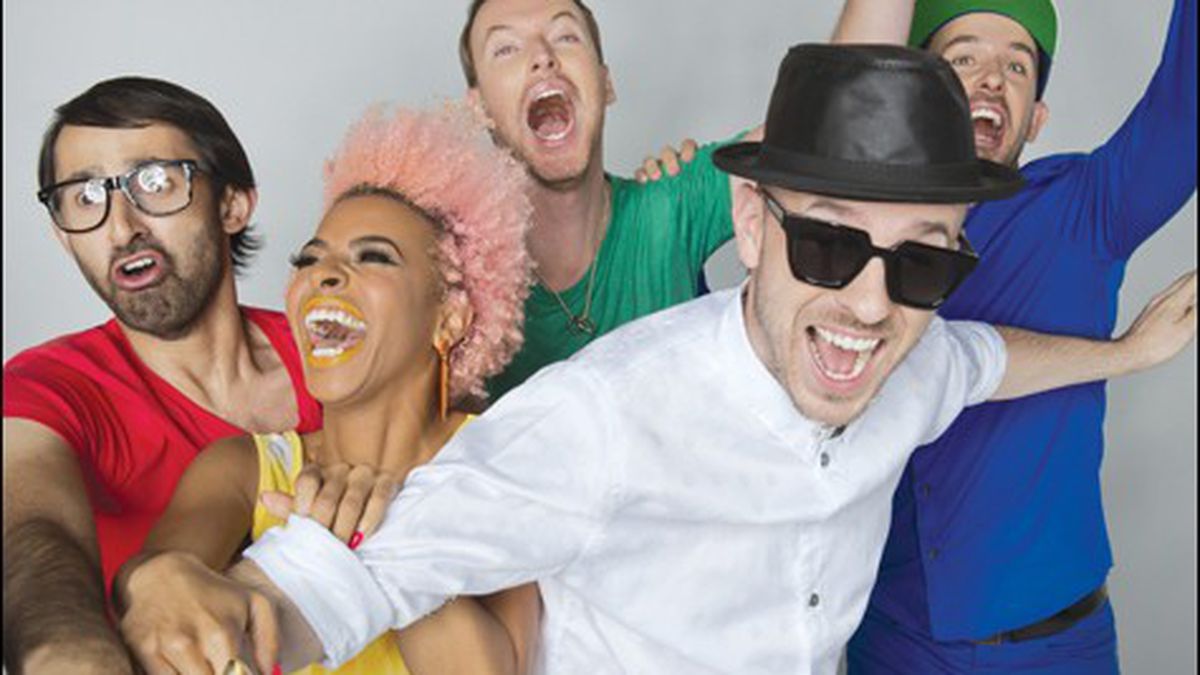 Oakland's Ricky Reed has gone from playing house parties to being signed to a major label — and his party anthems have evolved with it.

This summer Ricky Reed finally made someone cry. Although not for the reason anyone familiar with the Oakland-based party monster might think.

He didn’t trash anybody’s apartment or puke on anyone’s favorite shirt. Nope — he simply met a fan. Except this devotee promptly burst into the kind of hysterical, Beatlemania-esque crying that a certain species of superfan might be inclined to, upon meeting her idol. “It was kind of surreal and weird,” Reed said of the incident, over a choppy cell phone connection, as he and the rest of his group, Wallpaper., made their way between stops on their first-ever Vans Warped Tour.

As weird as it may have been, it was appropriate that Reed encountered his first blubbering fan at the Shoreline Amphitheatre stop on the Warped Tour. After all, the Bay Area is where he grew up, it’s where Wallpaper. formed, and it’s where the group has worked hard to achieve success. The band just released its excellent major-label debut, Ricky Reed Is Real, on Epic Records.

But back in 2005, when Reed — known to his family and close friends as Eric Frederic — started making beats and singing over them through a cranked-up vocoder, he never expected to come this far. “When the whole thing started, it was supposed to be purely satirical,” Frederic said. But in the years since, the singer has found a way to blend his sardonic and serious sides, and in the process has created something more powerful, with songs that are as enduring as they are funny.

Frederic was born in the early Eighties in Berkeley and grew up in a household rich with music. He started with Steely Dan and Sly and the Family Stone — two of his mother’s favorites — before moving on to California gangster rap by Dr. Dre and Snoop Dogg, and East Bay punk legends like Green Day, Rancid, and Operation Ivy.

Later, he developed a taste for more technical bands like King Crimson and Electric Light Orchestra, and eventually ended up joining an alternative prog-rock outfit called Facing New York, where he served as songwriter, singer, and guitarist. Facing New York made heady, soul-searching rock music that helped it earn some success — at one point the band toured with emo heavyweights Taking Back Sunday.

Back then, it would have been hard for Frederic to imagine himself becoming a purveyor of club-friendly pop music. But it was out of this environment that Wallpaper. emerged.

In a 2010 interview with local music blog The Bay Bridged, Frederic revealed that it was in 2005, while Facing New York was deep in the midst of piecing together a “prog opus” that he decided to take a break from the taxing recording sessions to do something more lighthearted. At the time, Frederic said, he thought of the material he was writing as entertainment — a way to poke fun at the state of popular music. The result was a six-song EP of tongue-in-cheek tracks that were each exactly two minutes and thirty seconds in length.

The EP could have been a simple one-off, but Frederic didn’t stop there. The project continued, and eventually he began playing house parties in Berkeley and Oakland — dressing in a fedora and dark Wayfarers and assuming his alter ego, Ricky Reed: a man who crooned about balling on a budget, blacking out, and falling down.

Unlike the pensive Frederic — who mulled over big ideas atop athletic drumming and angular guitar riffs in Facing New York — Reed was cutting loose and belting out party anthems such as “T-Rex,” a song about playing it straight and bringing home the bacon during the week, then going “big on the weekends.”

Wallpaper.’s material proved to be the perfect foil for much of the exuberant, over-the-top party music of the mid- to late-Aughts. Where Lil’ John and LMFAO were boasting about extravagant parties in Vegas, Ricky Reed was talking about partying in dirty kitchens with sticky linoleum floors. This was something people could relate to. And relate they did.

“We would literally do shows in living rooms and bedrooms,” Frederic said, recalling Wallpaper.’s early days, playing house parties with drummer Arjun Singh. “Complete strangers and creeps and whatnot would just roll into the party.” During one particularly rowdy bacchanal, a “full on hobo” came in and started rocking out, he recalled. The man decided to give Frederic — or, more precisely, Reed — a spray-painted-gold industrial chain, which ended up being a defining article of the singer’s wardrobe, along with his shades, hat, and assortment of bedazzled track jackets.

Judging by the lyrics on Wallpaper.’s early tracks and those early shows, it seemed clear that Frederic was a performance artist — a Tony Clifton for the hipster set.

On 2009’s full-length Doodoo Face, and the 2012 EP, #STUPiDFACEDD, the group refined its one-two punch of absurdity and dope beats. And with lyrics like My girlfriend is always telling me/you gotta start paying utilities, from Doodoo‘s “Ddd,” and throwing up in a bathroom stall/I feel so much and feel nothing at all, from #STUPiDFACEDD‘s “I’ve Got Soul, I’m So Wasted,” Frederic and Singh presented a level of self-awareness that was lacking in contemporary music.

Frederic takes that concept to new heights on Ricky Reed Is Real, the band’s first effort on a major label and the first full-length released under the new lineup — with Frederic and Singh joined by vocalist Novena Carmel, drummer Tom Peyton, and percussionist/horn-player/button-smasher Derek Taylor.

The name of the album and its leadoff track, “RRiR,” serve as a response to a question many have been asking Frederic for years now: Who is Ricky Reed?

I’m that bottle of Jack — he proclaims over throbbing bass and handclap snares in the opening seconds of the record — I’m the roach on your dresser! But as he continues, it is clear that Ricky Reed is more than a synonym for painting the town red; he’s also the last day of school, your first walk of shame, that one time on shrooms, and your first French kiss since you came out the closet.

For any diehard fan of Wallpaper., this is about as accurate a description of the band and what it stands for as any you’ll encounter: They can be transcendental and uplifting, even as they destroy your living room.

According to Frederic, the overarching concept for the album really gelled in the final six months before he finished it. In that time, Frederic walked in on his home being burglarized — an event that shook the singer to his core and left him more or less homeless and sleeping on friends’ couches. Then, Wallpaper.’s manager, Steve Brodsky, died of leukemia in March of this year. “It was just one of the hardest things,” Frederic said of losing Brodsky. “He was my best friend, essentially.”

The two traumas, coupled with a number of personal issues that he would only allude to, all deeply affected Frederic. “Realness came from all these experiences,” he said, which explains the earnest tone of tracks such as “Good 4 It” — a song with lyrics that he said have been interpreted a number of ways by the group’s fans: Do you remember that one time?/Well this is way worse than that one time/Well, you needed me then like I’m needing you now/Get your ass over here and help me out.

“A lot of people say to me, ‘Oh, ‘Good 4 It’ is such a great party song!'” Frederic said. “And I say, ‘Is that so?’ Some people hear it as a cry for help and other people hear it like a toast to friendship, like it’s an Irish drinking song.”

On “Puke My Brains Out,” a particularly frenzied track from RRiR, Frederic ostensibly describes a violent reaction to partying too hard. But he said it could also easily mean something else. “‘Puke My Brains Out,’ to me, is really a singular notion of clearing your head so you can enjoy yourself,” Frederic said.

The same goes for “Geek Out,” a booming, bass-heavy track, featuring rapid-fire, trap-style high-hats and verses from rapper E-40. When Frederic intones, I’m like, outside of my mind, he could be referring to being high or being hypnotized by the beat.

“It’s a hard feeling to describe. That idea of catharsis and perseverance and redemption is what the album is ultimately about at its core,” Frederic said. “I feel relieved to get a lot of the stuff off my chest. I kind of feel relieved to have survived it, honestly.”

Ultimately, the idea of making it out alive, in spite of the odds, might be the best way to sum up Ricky Reed Is Real. The record is a celebration of cutting loose, losing control, hooking up, and breaking up, but somehow pulling it together in the end and laughing (or crying) at the whole hot mess.