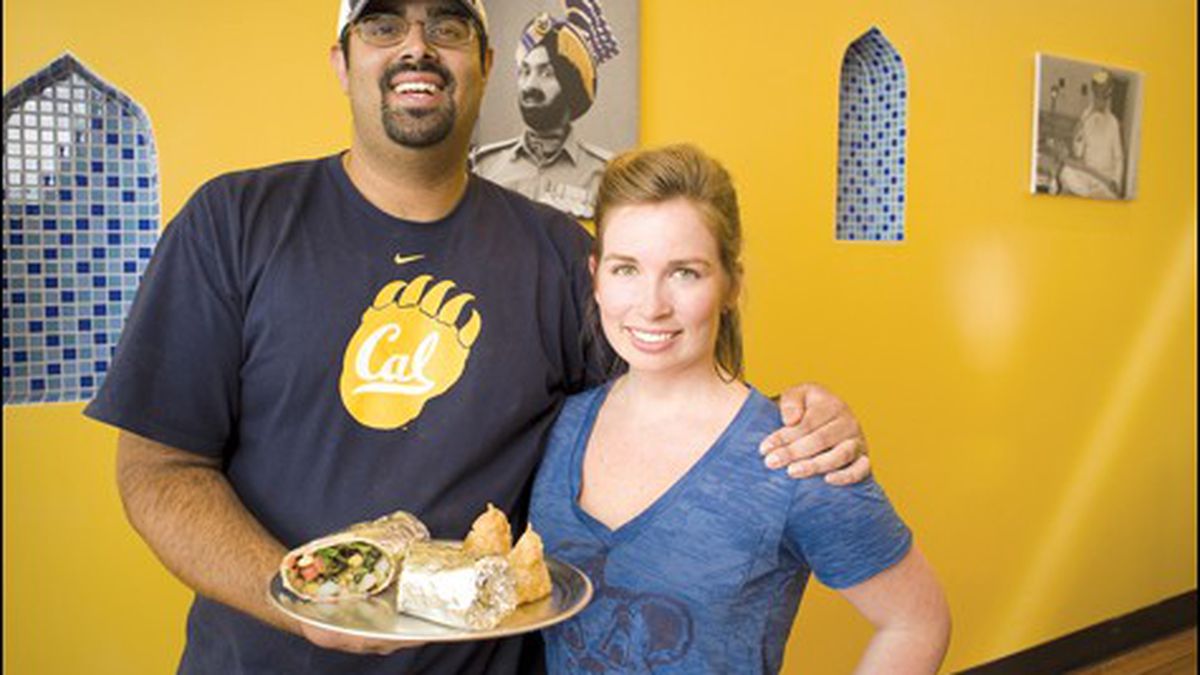 Opened within a few weeks and a few feet of each other, three new restaurants offer sturdy student food, Berkeley-style.

How do you feed students? How do you satisfy these cryptic creatures whose circadian rhythms are driven, until graduation, by footnotes and roommates and chemicals? How do you please them not only now and then but as a business model?

The block of Euclid Avenue heading northward from UC Berkeley‘s North Gate is Telegraph Avenue’s sleepy twin, ignored by tourists and chain stores alike. Looking almost like a ghost town for the last year or so, it sported many boarded-up storefronts; then, this summer, three new restaurants opened within a few weeks and a few feet of each other.

Feeding students for a living boils down to convenience, price, and speed. Student food might look novel, but it’s intrinsically homey, because the bittersweet truth about students, often to their own surprise and shame, is that for the first time in their lives they are learning the anguish of nostalgia.

You can see this in their eyes at Vinnie’s Cheesesteaks, which is one of the three. It’s that flash of recognition, that flush of gratitude, that flicker of identity and pride as patrons, feeling very far from home, recite their orders with a liturgical fluency. Requesting chopped steak on a soft roll with Cheez Whiz feels, for most of us, outlandish. For anyone from Philadelphia, it feels like saying I belong.

And what you get is juicy, salty, oozy, chewy, a culinary social-class mash-up as the humble Philly-made hoagie roll in its nearly flavorless neutrality embraces the open-range, sea-air seductiveness of Niman Ranch beef. (After all, The Omnivore’s Dilemma author Michael Pollan works right across the street at Cal’s Graduate School of Journalism, whose former dean is Niman’s original co-owner Orville Schell.)

Provolone and American cheese are available, too, but Cheez Whiz is the industry standard. What genius realized that this would work, much less become a local staple? Abundant, tasty tofu and Portobello-mushroom cheese “steaks” are also served here, but meats and non-meats are cooked with the same tools on the same grill. Other hoagies and sandwiches round out the menu, as do huge, delicious, heart-attack-in-a-basket heaps of garlic fries. (Arteries aren’t one of the things students worry about.) Vinnie’s onion rings, super-satisfying standouts, are crisp golden circlets as big as dog collars and almost as weighty.

For years, Aman and Chandler Mahal had been hoping to open an Indian restaurant somewhere in the Bay Area. When a space on Euclid became available, Orinda-bred Aman saw his chance to cook professionally the Punjabi family recipes he’d been tweaking since childhood. But the space’s student clientele, tiny size, and lack of indoor seating mandated making Indian food quick, convenient, and affordable.

Urbann Turbann meets this challenge with all-organic, cruelty-free, made-to-order wraps as big as bricks. Your choice of pillowy, house-baked naan or dairy-free, whole-grain roti is rolled tightly around masala potatoes and salad greens plus your choice of a number of slightly Berkeleyized Indian classics such as boneless Sonoma chicken marinated overnight in organic yogurt, then tandoor-cooked over an open flame. Aman’s pork vindaloo is inspired by his personal favorite eighteen-hour procedure for preparing barbecued pulled pork. Meatless selections include heady red Karahi paneer with toasty-springy cheese cubes; perfumed pea-studded mushroom mattar; and herbed seasonal vegetables (silky-soft Swiss chard right now, okra and eggplant up next). Into each wrap goes your choice of chutney, including tangy tamarind and rich, crumbly coconut. The fillings can also be had over brown rice in bowls, while Berkeley’s best new bargain might be Urbann Turbann’s $1 potato samosas.

Helping friends open an Indian restaurant in Mexico last year taught the Mahals a lot: not about rolling flatbreads burrito-style, which they’d already aced, but about flavors, Chandler said. Mexican stores don’t carry pre-mixed Indian spice packets, “so if you want to cook, say, a tikka masala in Mexico, you have to hunt for each individual spice, then decide how much of each to use and what to substitute for the ones you can’t find.” Back in the Bay Area, Aman now shuns pre-mixed packets, mixes his own spices, and is more experimental than ever.

The corner space from which brand-new Northside Cafe dispenses vibrant breakfasts and lunches is historic. Where punks mingled thirty years ago at Rather Ripped Records, diners now sip enormous coffees and linger over a full menu of house-made soups, salads, scrambles, hot and cold sandwiches, stuffed baked potatoes, and old-fashioned egg, pancake, and French-toast breakfasts at sleek tables and along a counter spanning vast windows facing Cal. Nine-foot ceilings and those gigantic windows provide a sense of dining alfresco, which is exactly what co-owner Soosh Nassar planned when he transformed a former bakery and adjoining candy shop into this sleek, lofty space. The East Bay native and St. Mary’s High School grad loves cooking and food and has been around both all his life. He’s also been around this neighborhood, as his father owns Brewed Awakening across the street.

“I first set foot behind a cash register at age eleven,” Nassar laughed. “Customers who come in now and recognize me from Brewed Awakening say, ‘I remember when you used to stand on a milk box to reach the keys.'”

His family also owns Grub N Go in downtown Berkeley, whose wildly creative sandwich combos also appear here: Fresh-roasted turkey with cranberry sauce, spinach, and cheese, for instance, and an almost-too-tall-to-bite baked-eggplant/mushroom/pesto panini. The best deals are the baked potatoes, which way outweigh nearly everything else for the same price, and hefty egg/potato/cheese/salsa breakfast wraps. “Technically, you should be able to walk to class eating it. If you don’t finish it before you get there, you can wrap it up neatly and eat the rest after class.”

Banking on Coal in Oakland