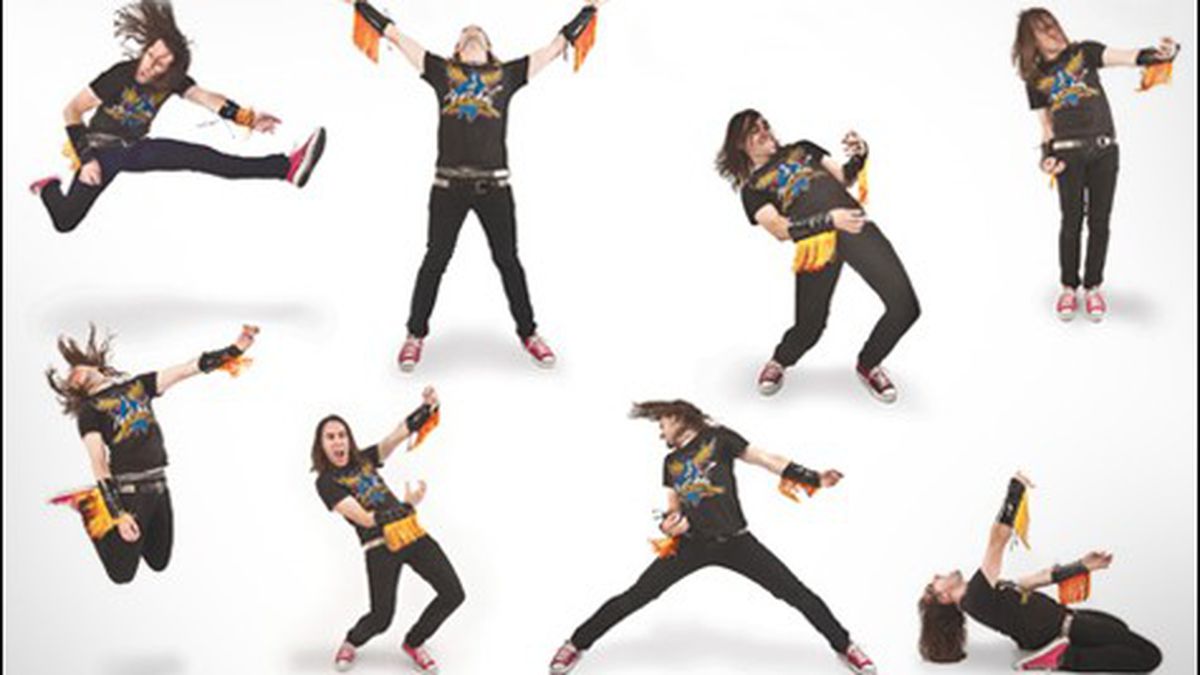 Forty will spar and two will prevail as this week's competition.

If you ever visit Matt Feldstein‘s sixth floor apartment in Portrero Hill, there’s a chance he might answer the door wearing a pair of black, spangly, metallic glitter tights. They’re the core piece of his uniform for Cold Steel Renegade, a hesher alter ego and formidable air guitar player. While the real-life Feldstein is a rather demure, soft-spoken social worker with an anthropology degree from UC Davis, Cole Steel Renegade, by contrast, is a two-time co-champion of the San Francisco regional Air Guitar Championships, with his own line of merchandise (Cold Steel wrist bands andtrading cards), and his own Facebook fan page (The Cold Steel Renegade Appreciation Cult). Right now he ranks tenth in the nation, tied with a female air guitarist named Aireola, from Minnesota. Few men in tights have achieved such greatness.

But the 34-year-old Peninsula native isn’t one to rest on his laurels. After prevailing in both the 2008 and 2009 San Francisco championships (2008 was the first time he’d ever been on a large stage in his life), Cold Steel is gearing up for the 2011 edition, which will be held this Friday and Saturday at San Francisco’s The Independent.

Like all air guitar competitions, it’s sure to be a rather decorous occasion. Each contestant strums an imaginary guitar to the song of his choice, edited as much as he pleases (someone once edited a Descendents song down to one word, and spent the rest of the time receiving fake sashes and accolades from people he’d planted in the audience). A panel of celebrity judges (which usually includes local musicians, comedians, and rock enthusiasts, and once featured a cool-ass local rabbi) scores about forty contestants on technical precision, agility, creativity, groove, and “airness,” which is kind of the air guitar equivalent of je ne sais quoi. Using an Olympic figure skating-like scoring scale that ranges from four to six, the judges preside over two separate competitions, one held Friday, the other Saturday. Because San Francisco is such an “air-friendly” city, it sends not one but two regional winners to the national rounds.

Cold Steel Renegade is ready. He’s got an outfit picked out, and it’s just small enough to fit in a fanny pack. The shoes? Two-toned, black-and-white “cockroach killers” — so named for the extra inch of space between the wearer’s toes, and the end of the shoe. (Cold Steel points out that it’s just big enough to hide a sack of cocaine. Or an empty void.) The shirt? Ha ha, suckers, there isn’t one. The arm bands? Made of four-inch strips of astro turf. The hair? Long and flowy, and light enough to blow back in a faint gust of air. The sideburns? Muttonchops, like the ones sported by 19th-century French hussars. The accessory? Tights. And manly tights at that, procured from a dumpster on Market Street.

Psych. He bought them at Forever 21. Cold Steel explained that tights have been the centerpiece of his ensemble for three years now. “It started with the first pair of tights my sister gave me,” he said. “My first competition in ’09, I was like, ‘What do I wear?”Well shit, I got these pink tights — why not?'”

Cold Steel actually entered the 2009 competition on a lark, after reading about it in local periodicals. He chose an AC/DC song, “Safe in New York City,” which has all the elements of a great air guitar song — namely, an aggressive dance groove and a “facemelter” solo. At that point, Cold Steel had never tried air guitar professionally, though he’d played “there” guitar (aka “wooden” guitar) in a couple bands, among them Collateral Jammage and TripKnight. Other than that, he’s been dancing around on his own, and listening to “a shit-ton of classic rock” for about as long as he can remember. Plus he might be the only male in his family who is capable of growing thick, bushy sideburns and equally bushy chest hair. Clearly, it was destiny.

Same for Alex Koll, who first entered — and won — the San Francisco Air Guitar Championship in 2008, at the behest of his friend, bandmate, and fellow titleholder Craig Billmeier, aka Hot Lixx Hulahan. The two had played together in a local punk band called Your Mother — Billmeier on “there” guitar, Koll performing a kind of go-go/cheerleader/hype man act for the band’s road show. Billmeier secretly entered the regional air guitar championship in 2006 — “secretly,” because some of his bandmates didn’t know about it. He won that one, and went on to win the nationals at New York’s Bowery Ballroom, where his chief rival was a guy named William Ocean. (Their battle for supremacy was the subject of great poetry and much media hype.) Billmeier said he was a natural fit for the contest because, as many of his friends will attest, he plays “there guitar more like an air guitar. Meaning I don’t pay much attention to executing it properly,” Billmeier confessed. Koll agreed.

Billmeier convinced Koll to enter the competition in 2008. “He actually coached me from the road,” Koll said. “He was like my sensei.” Under Billmeier’s tutelage, Koll learned such useful tips as “watch your left hand extension” — if only to make sure it looks like you’re playing an air guitar, not an air ukulele. Also, go big. Anything you do, make it bigger, more heroic, more extravagant. And stand still every once in a while. “Don’t go bouncing around everywhere, because then it looks like a medical emergency, and not so much a routine,” Koll explained.

Koll entered in 2008 under the name Shred Begley Junior, which he later changed to The Awesome, to match the slogan on his T-Shirt. (This year he promises not to be Awesome anymore.) He and Hot Lixx both won the regional in 2008 (Hot Lixx was actually competing in DC that year — long story) and advanced to the national round, where Lixx trounced Ocean yet again — in no small part because he broke his thumb while twirling and falling during a particularly rapturous power chord, then wrapped it with duct tape and went on to do a front-flip stage dive, onto an inflatable killer whale. (Another contestant, Bettie B. Goode, accidentally amputated her toe that same night). Billmeier recently retired from air guitar competitions, and he’s now the tour manager for the US Air Guitar championship league, which means he gets to do air guitar as a full-time job. He’ll also perform at halftime during the San Francisco championships.

For most people, though, the rewards of air guitar are pretty intangible, said Koll, who is better known as a stand-up comedian. “There’s no money at stake in this,” Koll explained. “Just glory. Maybe enlightenment. Respect, maybe, but probably not…. I think that if you win the world championships in Oulu, Finland, you get a guitar, and it’s clear Plexiglass — which is the closest a real guitar ever gets to an air guitar.”

And yet he and Cold Steel still plan to compete this year, albeit with slightly different legwear. Koll said he errs more on the side of hot pants.