The "bohemian fine dining" restaurant is an exercise in dining out as theater. Alas, the food feels like an expensive afterthought. 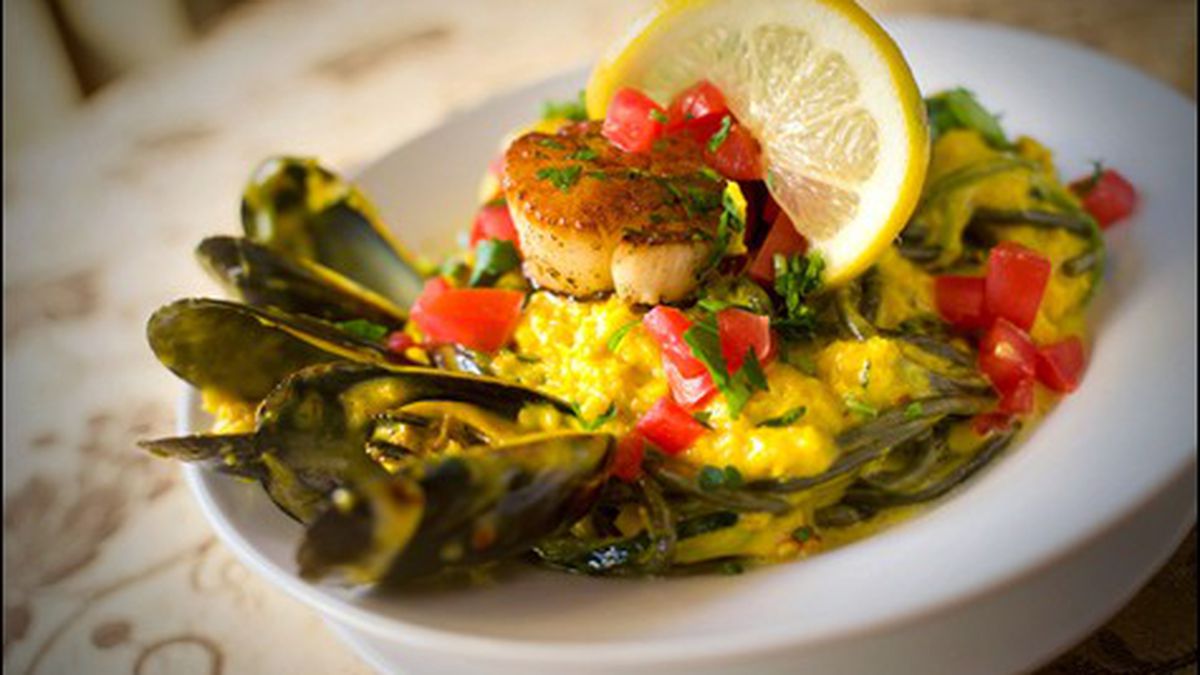 The central conceit of Loring Cafe, the eclectic new restaurant located in the heart of Oakland’s booming Uptown neighborhood, is “bohemian fine dining.” You get a glimmer of what that means as soon as you step into the space, with its soaring Corinthian-style columns, gold-gilt dining chairs, and painting of a semi-nude Saint Sebastian (arrow-pierced and looking sultry in tight shorts). Undulating brickwork curves every which way — especially inside what might be the gaudiest restaurant bathroom in the Bay Area.

Add the assorted cast of characters who work in the restaurant (as large a collection of bow ties, suspenders, and newsboy caps as you’ll find in this town), and you end up with a cross between a speakeasy, an old-timey carnival, and a scene from Alice in Wonderland. It’s slightly tacky and completely over the top, and whatever you think of the place, you have to admire owner Jason McLean’s commitment to a vision.

McLean opened the original Loring Cafe in Minnesota in 1986, and he said that from the beginning the restaurant was meant to be a gathering place for theater people and artistic types — where “weirdos” could feel comfortable and even land jobs. McLean, who still owns a restaurant and a theater in Minneapolis, comes from a theater background himself. Which makes sense: Of course a restaurant built by theater people would look more like the set for an elaborate absurdist comedy than it does a regular restaurant.

Anyway, some of the finest cooks I know are theater geeks. A menu of thoughtful, whimsical — and, above all, delicious — food would feel entirely appropriate in this stylized setting. McLean said part of his idea of “Bohemian fine dining” is to avoid conforming to the culinary trends of the moment, and so he very deliberately did not hire a name chef. Instead, the menu consists almost entirely of recipes that he developed himself, many of the dishes direct transplants from his Minneapolis restaurant. McLean calls the style “a culinary state of the union” — American home cooking with a smattering of international influences.

But in the end, most of the dishes at Loring Cafe are more or less what you might expect to be served at a “bohemian” restaurant: everything a little bit weird and overpriced, and not much of it any good. Despite the inclusion of various “global” ingredients, the food wasn’t especially adventurous — but it wasn’t comfort food either.

Take the Chicken Vivek, a dish McLean said was inspired by Vivek Bandhu, a New York City chef he once worked for. May we all be spared the indignity of having such a creation named after us. The dish was, for starters, aggressively unattractive — a mound of clumpy rice topped with raisins and drowned in a puddle of brownish-beige cream sauce. Buried somewhere in there were button mushrooms and chunks of boneless chicken breast, but the sauce was spiked with so much cardamom that it was impossible to taste anything else. For this, we paid $22.

The Seafood Spaghetti, one of several pasta dishes, was likewise drenched in cream. This time it was a bright-yellow saffron cream sauce that overwhelmed an otherwise bland dish, imbuing it with the vaguely plasticky flavor that results when that spice is applied with too heavy a hand.

The “Minnesota style” turkey-and-brie sandwich, on the lunch menu, was the best of the entrée-ish items we tried. It was fine. Despite the presence of apples and a smear of lingonberry preserves, this wasn’t as sweet a dish as I feared, and the bread was nicely toasted. The accompanying garlic fries were better than ballpark fare, though they came to the table barely warm, and were stone cold within ten minutes.

Appetizers held more appeal. The rich Artichoke Ramekin, the restaurant’s signature dish, was served piping hot, with buttery garlic toast on the side. McLean said he tweaked a recipe he got off the label of a mayonnaise jar back in the Eighties, before artichoke dip was a commonplace thing. Yet the fact remains: It is commonplace now, and while Loring’s version is a crowd-pleaser, it isn’t so different from what you’d find at any number of chain restaurants.

It should be noted, however, that whoever is working the grill station at Loring Cafe knows what he or she is doing. The best items were cubes of red meat: the skewered lamb kebabs in the Lamb and Veg “Picador” and the eponymous beef in the Warm Spiced Cinnamon Beef Salad. In both cases, the meat was seasoned simply and well, and was cooked to unimpeachable tenderness. (That said, the Israeli couscous that came with the lamb was overcooked, and the humdrum salad greens were soaked in too much cloyingly sweet raspberry vinaigrette.)

On the other hand, the Coconut Shrimp Cozumel (five monstrously large, batter-fried things) tasted of little beyond oil and shredded coconut — it took three full bites of batter just to reach the shrimp.

Ultimately, then, the best time to dine at Loring Cafe is during happy hour, from 3 to 6 p.m. on weekdays, when appetizers are half off. The artichoke dip and the lamb kebabs will fill you up, and they’re tasty enough even if they won’t blow your mind, and — at $5 and $7, respectively — the price is right. Go for a glass of wine and a quick bite, and to soak in the atmosphere (and maybe some live accordion music if you’re lucky).

But for $10 and $14? Look: Oakland isn’t Minneapolis, and it isn’t 1986 anymore, and there’s no lack of spaces in this city where artists can hang out. If you’re going to open a rather expensive restaurant in one of the most prominent spots in the city’s trendiest foodie neighborhood, your food had better be on point.

In this town, you can do far, far better.