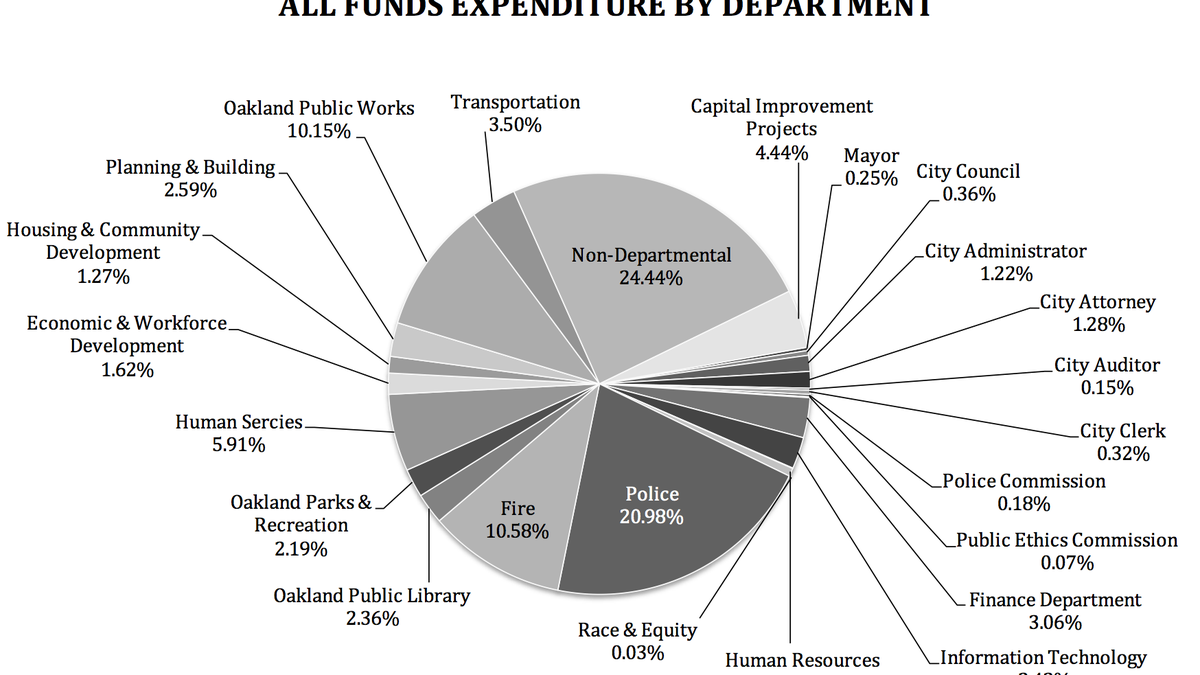 By Darwin BondGraham
May 1, 2017
Oakland Mayor Libby Schaaf released her proposed 2017-2019 budget late last Friday. She’s projecting a $32.5 million gap over the two years that will have to be bridged with spending cuts and new revenue.

Of course, Schaaf’s projections are debatable. It’s possible the city will pull in more revenue, and costs won’t soar so high. That has happened in past years. Then again, the current economic expansion can’t last forever. If there’s a recession, Oakland’s budget will suffer.

Whatever the actual revenues and costs turn out to be over the next two years, the budget is a big puzzle. Schaaf’s proposal is one way of arranging the city’s complicated finances. Here’s a (very incomplete) preview of what Schaaf wants to do, but keep in mind, it’s the city council that holds the purse strings and will ultimately decide what gets funded, and at what levels.

50 more cops: $1.5 million would pay for a third police academy in 2018-2019, adding fifty more officers to the department. This would bring the total number of sworn officers to 792 from the current 754. This comes on top of $9.4 million approved last year, outside of the budget process, for the hiring of more police officers. Another $9.3 million was similarly allocated for the hiring of more police officers in 2015, outside of the normal budget process.

12 more fire inspectors: The Fire Department would gain six more civilian inspectors next year, and then another six in 2019, tripling the number. But the city will have to successfully hire and fill these positions. In recent years, positions in the Fire Prevention Bureau have gone unfilled despite being budgeted. The costs of adding these inspectors would be $1.79 million per year, but the jobs would be self-funded through fees paid by property owners.

More planners for faster development: Schaaf’s budget adds at least 11 new positions to the Department of Planning and Building that would focus on helping developers get the permits they need to break ground on projects faster.

Cutting Head Start: Due to a reduction in a federal grant award, Oakland’s Head Start program will be cut by $390,000 per year. The city will lose four Head Start instructors. The Eastmont Child Development Center, which currently serves 32 children, will also be closed.

3 percent increase for homeless services: Oakland currently has about $7 million in grant funded programs to assist its homeless residents. Schaaf wants to add $250,000, or an increase of 3 percent.

Oakland also has $62 million in new funds that can be spend on infrastructure thanks to Measure KK. Schaaf’s “Capital Improvement Program” budget, which includes Measure KK money and another $58 million, proposes the following:

Libraries: The West Oakland, Asian, and Brookfield libraries would split about $2 million and the main library would get another $2 million.

Streets: Schaaf wants to spend $62 million on Oakland’s streets over the next two years, including projects for cars, bikes, and pedestrians.

No affordable housing: Notably absent in Schaaf’s Capital Improvement Plan is investment in affordable housing. Although the CIP anticipates $35 million in affordable housing programs, the only specific housing-related expenditure would be a $275,000 upgrade of the Henry Robinson Center’s air conditioner. The center serves homeless adults, many who live in the camps downtown and in West Oakland.


Correction: the original version of this story stated that the salaries for the additional 50 officers that will be hired by the additional police academy are not funded in future years. In fact, their salaries are in OPD’s budget
Facebook
Twitter
Linkedin