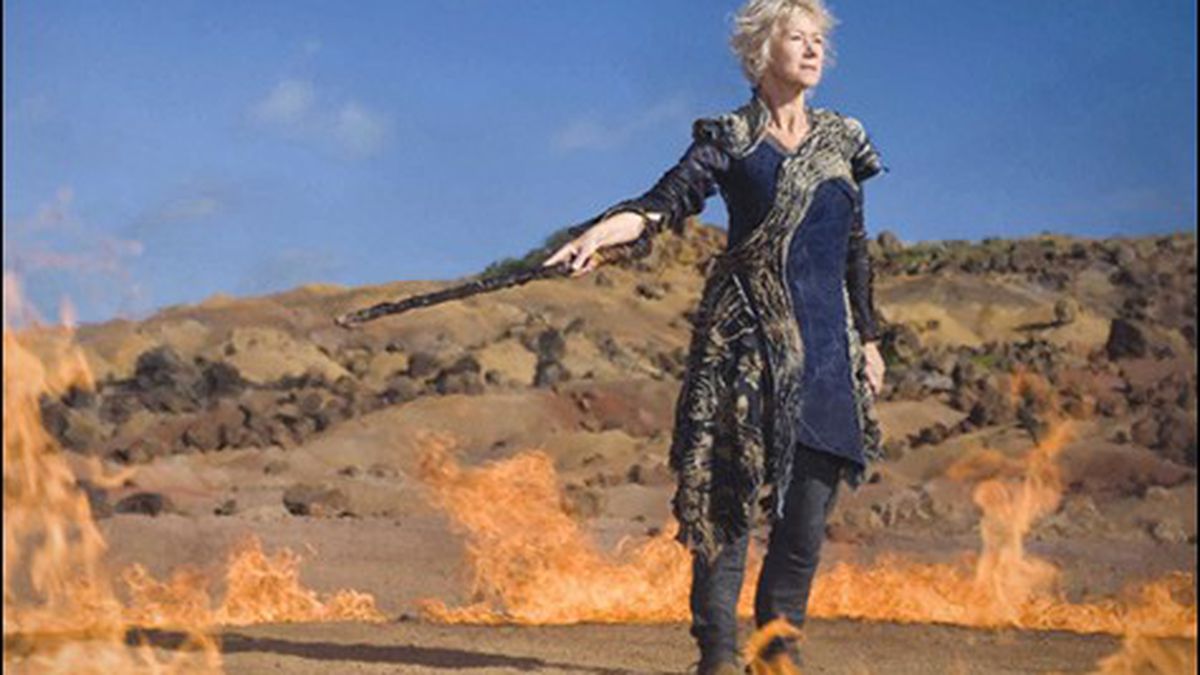 Julie Taymor and her friend William Shakespeare are back in town again.

The last time director Julie Taymor adapted a Shakespeare play for the screen it was the vicious, bloody, long, and drawn-out Titus in 1999. Times have evidently changed, and for the better. Taymor’s latest excursion into the Classics Division is a well-considered rehab of The Tempest, armed with a few 21st-century touches but essentially in the same key as the original play, one of the Bard’s more optimistic visions. Plus a little sex, a shpritz of slapstick, and a more-than-generous helping of Russell Brand.

The first thing Elizabethan drama fans will notice is that the lead character, the exiled magician Prospero, has become a female, Prospera, played by Helen Mirren. Prospera dwells on the desert island — shot in various Hawaiian locations and in a Brooklyn, New York studio — where she and her daughter Miranda (tender-faced Felicity Jones) have been stranded lo these many years, and where Prospera, deposed duchess of Milan, patiently plots her revenge on Alonso, King of Naples (David Strathairn), who set her adrift at sea in a long-ago power grab.

As fate and Prospera’s weather-sorcery would have it, Alonso has now been stranded on that very same island along with fellow conspirator Sebastian (Alan Cumming), Alonso’s doddering old adviser Gonzalo (Tom Conti), Alonso’s son Ferdinand (tender-faced Reeve Carney), and Prospera’s sharp-tongued, traitorous brother Antonio (Chris Cooper). The action, such as it is, consists of four parties of characters loudly discoursing as they traverse the rocky volcanic island terrain on their way to a showdown in the last act — the obligatory Shakespearean climax in which the cards are finally laid on the table and the coincidences multiply like WikiLeaks. All this talk is quite restful, but Taymor takes care to spice it up with her trademark visual flourishes.

The sword-brandishing, black-clad quartet of Alonso, Antonio, Gonzalo, and Sebastian form the first group, with Conti’s Gonzalo appropriating the best lines. The two tender faces, marooned Ferdinand and sheltered islander Miranda, who has never before seen any other person than her mother until now, make up a twosome all their own. No doubt they’re searching for a quiet spot to smooch.

The third party seems at first to be where all the fun is. Two clownish servants leftover from the King Alonso shipwreck, Trinculo (Brand) and his wine-quaffing buddy Stephano (Alfred Molina), run into the island’s most peculiar inhabitant, the “monster” Caliban (Djimon Hounsou from Push and Blood Diamond), and the trio provides pointed, wobbly laughs. Cave-dweller Caliban, accursed offspring of a witch, is encrusted with what looks like a crust of volcanic lava and ash. He believes the two pratfalling drunkards have fallen from the moon and thus defers to them with absurd obsequiousness, which only makes the fact that Caliban is a black African all the more painfully ironic. Untroubled by guilt, the two buffoons enjoy lording it over the ignorant “slave.”

Party #1 is all business, heading for a fall. Party #2 is the younger generation, innocent and dewy-eyed. Party #3 is part goon show, part pathetic posturing, another of Taymor’s patented commentaries on race. Our sympathies naturally congeal around the farcical trio of Molina, Brand, and Hounsou. Only such a procession of hams could expand so effortlessly into a 21st-century discussion of race, class, and power at a moment’s notice.

The fourth party, the true heart of The Tempest, insinuates much in the relationship between Prospera and her will o’ the wisp genie, Ariel, played by Ben Whishaw. Held in servitude by the sorceress because she rescued him from the clutches of the witch Sycorax, Ariel is condemned to fly around performing tasks for Prospera in order to secure his freedom.

Mirren, of course, is one of the finest and most consistently enchanting actors in films, even in throwaway flicks like Red. She can even make a disaster like Love Ranch bearable when she’s onscreen. But here, reflecting the wrath and regrets of the wronged magician from a female perspective opens up new avenues of emotion — especially when androgynous-best-friend Ariel is factored in. Taymor pays extra attention to Prospera and Ariel’s exchange of confidences. Mortality and lost opportunity, not political power nor young love, are their chief worries, until “all return to barleycorn.”

Taymor, an American-born theater and opera director who made her commercial bones staging Disney’s The Lion King on Broadway, has used her infrequent filmmaking ventures as her own private fantasy lab ever since the aforementioned Titus in 1999. She clearly favors British thesps, but even though she takes care to slip the odd Jessica Lange (Titus), Evan Rachel Wood (Across the Universe), or Edward Norton (Frida) into the deck for the hell of it, Taymor seems to share what we like to call the Ken Russell impulse. That is, to take a classic high-art property or premise, tart it up with extravagant visuals and over-the-top performances until it’s pretty much unrecognizable, and then put a cherry on top.

Taymor’s canvas may be a bit broader than Russell’s — à la Beatles/Sixties odyssey Across the Universe and Frida‘s artist/feminist mythology — but the effect is more or less the same. Good grief, look what she’s done to William Shakespeare: CGI dogs of hell, rings of fire, and an outer-space fantasy sequence. Special kudos to Stuart Dryburgh‘s cinematography and Elliot Goldenthal‘s music score.

Taymor’s trippy interpretations excavate the nuances in the material, make us think about it from a new point of view, and breathe new life into cobwebbed stories. We might carp about Taymor’s penchant for picking on Shakes’ most hard-to-love plays and turning them into mega-colorful, eye-popping entertainment for audiences who don’t know their Mercutio from their Portia — but isn’t that the point of Shakespeare in the first place?

Compared to Titus‘ grandiose Italian locations, The Tempest sports a stripped-down aesthetic. The real beauty of Taymor’s conception is in the language — both Shakespeare’s and the body language of her cast — and the silences that lie between the lines, particularly from the philosophical Prospera. She takes no pleasure in revenge and mourns that “Every third thought shall be my grave.” In her candy-wrapper-foil coat, she’s the ideal wizard for an era of reduced expectations.