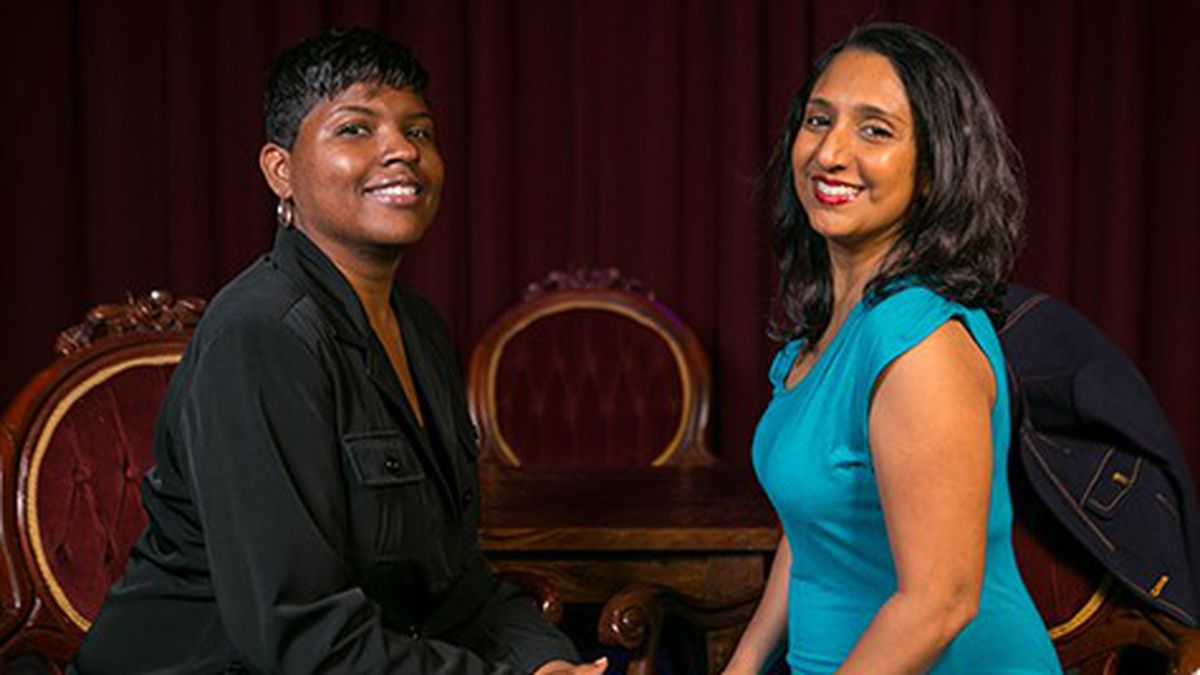 These Comedians Are Shaking Up the Stand-Up Scene

Female comedians are blending progressive politics and social justice into their routines — and pushing the boundaries of mainstream Bay Area stand-up.

When Aundré Herron first started doing stand-up comedy twenty years ago, she sometimes struggled to connect with her audience. As an inexperienced comic, Herron was still honing her craft, but the lukewarm responses also had a lot to do with her content. “I wanted to talk about politics,” she said. But the crowds, it seemed, expected female comics to talk about “breaking up with their boyfriends and getting their periods.”

Over the years, Herron, a San Francisco-based black comic, worked to carve out a niche for herself in an industry dominated by white men and plagued by sexist, racist, and otherwise offensive jokes. A lawyer who has advocated for death row inmates, Herron sees stand-up comedy as a uniquely effective platform to confront a wide range of serious topics, like homophobia within African-American churches, race relations in the United States, and other social justice issues. “The power of comedy is, at its core, based on truth,” she said.

While Herron has advanced her stand-up career over time, mainstream comedy is still very white and male — even in the Bay Area. A group of local comics have been working to change that, and now, they are looking to the East Bay as ground zero for alternative comedy. On Friday, Herron and six other female comics will perform at XOXO Nightclub (201 Broadway, Oakland) in Jack London Square, as part of a “socio-political” comedy night called The Formula, co-headlined by Bay Area comics Karinda Dobbins and Dhaya Lakshminarayanan.

Last year, Dobbins and Lakshminarayanan also launched a live comedy show and interview series at La Peña Cultural Center (3105 Shattuck Ave., Berkeley) called Stand Up Sit Down, which has its fourth installment on April 25. That event, they said, is what would happen “if renegade comedians locked Wolf Blitzer in a broom closet and then ran CNN’s Situation Room.”

Dobbins and Lakshminarayanan both perform regularly at venues throughout the Bay Area, but they said that producing their own shows gives them an opportunity to push the boundaries of traditional stand-up and bring unconventional and experimental routines to the stage. Though they are promoting The Formula as a Women’s History Month event, they both expressed frustration that comedy is still such a male-centric industry that having an all-female lineup is inherently some kind of political statement.

“Diversity! Women in comedy! Blah blah blah,” Lakshminarayanan, a San Francisco-based comic, said at the start of our interview. “Who wants to come to a show advertised as medicine, as good for your cholesterol?” she said, pointing out that their events are foremost about providing entertainment — even if their routines are edgier or more political than shows at mainstream clubs.

“When there are six male comedians, they don’t point out that they’re male. That’s just a comedy show,” added Dobbins, who lives in Oakland. Similarly, when female comics make fun of men, “they get stereotyped as men-bashing. But there’s no equivalent for women-bashers. That’s just comedy,” said Dobbins, who has touched on topics such as reproductive rights, pay equity, and police brutality in her routines.

For starters, socio-political comedy means the jokes generally aren’t at the expense of marginalized communities, which is so often the case in mainstream comedy, Dobbins explained. That won’t be a problem at The Formula, because the comics they recruited are so diverse — mostly LGBT performers and people of color.

While a few men may miss the dick jokes and “chicks are stupid” routines, Lakshminarayanan said, most stand-up audiences want smarter comedy and more female comics. She joked that she feels the same way about women in comedy as Ruth Bader Ginsburg does about women on the Supreme Court — that they should rule.

Female performers are underrepresented in all forms of comedy, and political satire is no exception. Dobbins pointed to male comics like Stephen Colbert, Jon Stewart, W. Kamau Bell, and Hari Kondabolu, who dominate the liberal, politically oriented comedy world. Culturally, Oakland is a perfect fit for comedy shows with social justice themes, Dobbins said, but historically, the city hasn’t been home to enough venues.

Unlike San Francisco, which has the Punch Line Comedy Club, or even Pleasanton, which has comedy club Tommy T’s, Oakland has no dedicated comedy spaces. Still, Oakland bars, nightclubs, and theaters have increasingly hosted comedy nights in recent years, which means there’s a growing scene — one that supports alternative acts. And that’s created more opportunities in Oakland for local comics who don’t generally headline at the larger Bay Area venues. “Oakland is really having a sort of comedy boom,” Dobbins said.

Lydia Popovich, one of the comics performing at The Formula, has helped boost the local scene with Ladies Love, a monthly night of female comics that she hosts at the Layover (1517 Franklin St., Oakland). As more comedy shows have popped up in smaller East Bay venues, she said she wanted “women to have a forum to be funny together … without having to wade through a sea of men. … There’s camaraderie.”

And Dobbins, who is a lesbian, said it’s important that women of color and LGBT people are represented in this local comedy surge. “Oakland deserves its own scene,” she said, noting that she and Lakshminarayanan both have extensive experience breaking into industries that are predominantly white and male. In her day job, Dobbins works for a biotechnology company in Emeryville, and Lakshminarayanan, who has two degrees from the Massachusetts Institute of Technology, consults on a range of projects. The Formula’s title is a reference to their backgrounds in science and technology as well as an acknowledgement that they are creating their own “formula” for success in the comedy world, Dobbins said.