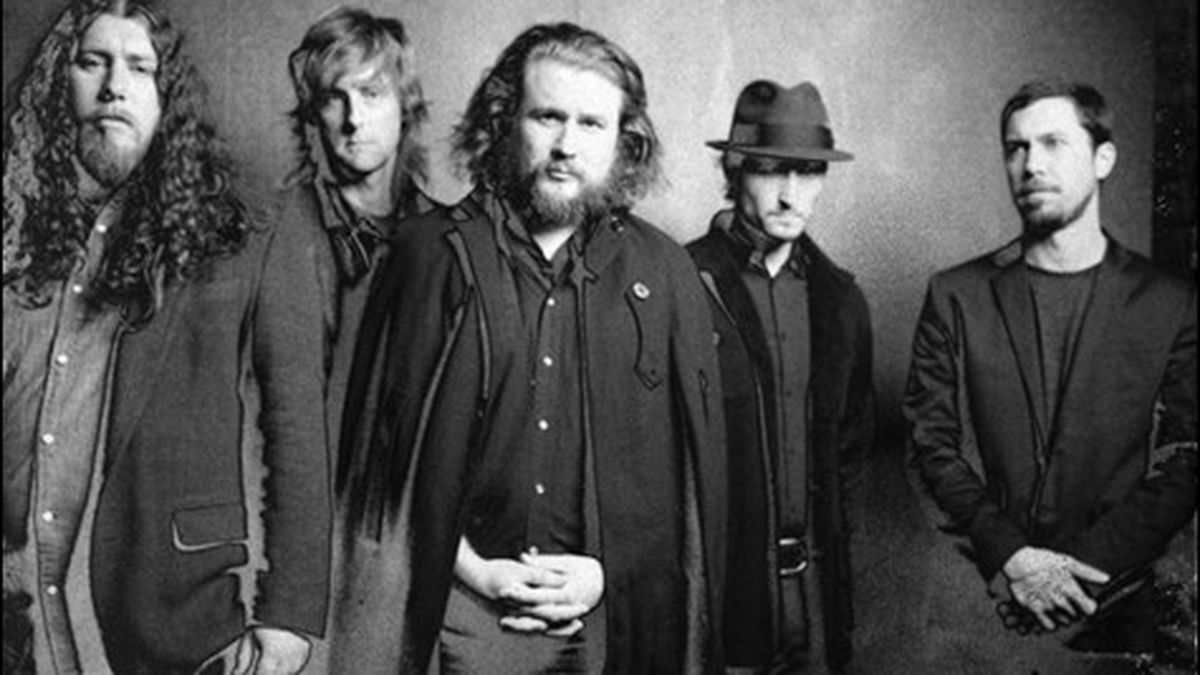 A weird point of intersection for Shabazz Palaces and My Morning Jacket.

As a music critic in the Bay Area, I’ve spent years perfecting my description of that shambling, hippie “be-in” dance — the one dubbed “White Man’s Dance” by UrbanDictionary.com, though it’s now the province of all ethnicities.

You know the one. It was invented circa Summer of Love and perfected over many years of Lilith Fairs and Reggae on the River festivals — you’re guaranteed to see it at any music event in which the rhythmic abilities of the performers far exceed those of the audience. Rappers glimpse such movements from the stage and hang their heads in embarrassment; detractors have called it “a way to take up space” and “demonstrate one’s sense of entitlement.” Historically, it’s allowed dancers to colonize wide portions of the floor, flinging their arms with such exuberance that they start to resemble slow-moving helicopter propellers — and they can be every bit as dangerous. At his most ecstatic and blithely unaware moments, the dancing White Man (who, as mentioned, need not be white, nor male) obliges other spectators to grant him as wide a berth as possible.

Such moves were certainly in evidence at the Greek Theatre last Saturday — and I quickly fled to the bleachers when a swinging hand bearing a lit cigarette came perilously close to my eyeball. That said, the sparsely packed crowd was a little more polite and a little less flamboyant than the typical jam-band audience. The most enthusiastic among them began dancing at twilight, when Seattle-based duo Shabazz Palaces took the stage in anticipation of the psychedelic jam band headliner, My Morning Jacket.

Shabazz Palaces is the new project of Ishmael Butler (aka Palaceer Lazaro), formerly “Butterfly” in the jazz-influenced hip-hop group Digable Planets. Though he’s been MIA for more than a decade — save for a few ill-fated attempts to resurrect the Nineties-era hip-hop trio that originally propelled him to fame — Butler has retained much of his original appeal. Standing before the crowd at the Greek Theatre with a laptop and a percussionist (African drum master Tendai “Baba” Maraire) in tow, he wore black shades, a skull tank top, and a close-cropped goatee. Both he and Maraire bristled with cool self-possession as they cued up their first track, nodded their heads in unison, and unleashed a stream of sputtering drumbeats into the loudspeakers. Even a jam band fan couldn’t help but shake his hips.

And shake they did, albeit in a form that had evolved considerably from the White Man dance of Greek Theatre concerts past. This new dance was a remarkable display of self-discipline, with arms pinned more tightly to the body, and legs wobbling to and fro, almost as though each dancer were wading through a giant tub of shampoo. Butler rapped long, stream-of-consciousness phrases into a microphone while Maraire alternated between a snare drum and a set of bongos. The resulting music bore no resemblance to the catchy, melodic, sample-driven sounds that Butler perfected in Digable Planets. Rather, it was a much more hard-edged and metallic form of hip-hop, centered around a live drum but intent on never locking into a groove.

Nor did the members of Shabazz Palaces seem at all interested in interacting with their audience. They sometimes twirled in synchronized motion, their movements as stiff and exacting as two wind-up figures in a music box. But they never stopped the music, never strayed from the laptop rig, and barely looked up to meet the eyes of audience members. And the crowd responded in kind, dancing stiffly to the long sequence of electronic beats and the near-hypnotic sound of Butler murmuring into a microphone.

Shabazz Palaces might seem like an odd fit for fans of My Morning Jacket, even if its ties to the indie label Sub Pop make it a “crossover group” by definition. While Digable Planets had extremely wide appeal, Shabazz Palaces seems to occupy a much narrower sliver of the pop music spectrum. Butler veers from political soliloquies (I’m free/Shit, you know I’m free) to empty reveries in which he repeats the same line over and over again (Who do you think who you are? he chanted at Greek Theatre, to no one in particular). The group’s music, wedged somewhere between hip-hop and electronica, with nods to certain Seventies-era antecedents (Gil Scott Heron comes to mind), doesn’t provide a lot of meaty hooks or danceable beats to latch onto. Butler spent much of his earlier career sampling Miles Davis horn lines and making intelligent music for the masses. Now 43 years old, he seems content to follow a new artistic muse, even if it aligns him with jam-band rock instead of hip-hop. If rhythm-less dancing is an unfortunate byproduct, so be it.

That said, when My Morning Jacket took the stage shortly after 9 p.m., launching into a jaunty version of its new song “Circuital,” the disconnect seemed jarring — even a die-hard advocate of genre cross-pollination might scratch his head and wonder what kinds of conversations the two bands had backstage. The five members of My Morning Jacket formed their outfit in 1998, but they all seem like relics of the Seventies: long hair; cowboy boots; deep, bellowing vocals. At this particular concert, singer Jim James took the stage wearing a cape, which gave him the air of a Lord of the Rings character. He and the other band members — guitarist Carl Broemel, keyboardist Bo Koster, drummer Patrick Hallahan, and bassist “Two Tone Tommy” Blankenship — seemed to have spawned from an era when shaggy hair and woolly beards were all considered cool. Today, they make unlikely sex symbols.

But if the dancing seemed a little staid and tame for Shabazz Palaces, it ratcheted up a notch for My Morning Jacket, perhaps because the latter band invites such freewheeling movements. Folksy two-part harmonies and blues-influenced rock chords are Morning Jacket’s stock in trade; most of its songs devolve into long, psychedelic vamps that drag out for ten minutes at a time. The Greek Theatre is certainly familiar to such long-winded jam-band wankery, since it’s hosted such groups as Phish, String Cheese Incident, and Phil Lesh and Friends many times before. Yet My Morning Jacket might be the apotheosis: From the moment James shook out his luxuriant, wavy hair and Broemer shredded his first power chord, the ghosts of Deadheads past were suddenly omnipresent. Fans who had given Shabazz Palaces a lukewarm reception went all out for My Morning Jacket, swaying their hips, dog-paddling the air, and sloshing their beers ecstatically.

It was, emphatically, a jam-band crowd: well-dressed, well-heeled, possessing of blue wands and glow sticks and fragrant weed. Indeed, the whole scene seemed antithetical to Shabazz Palaces’ futuristic, Afrocentric sensibility — it’s hard to believe a group that called its first album Black Up would then deign to court a majority-white audience. Then again, Butler has evidently outgrown the parochial domain of hip-hop. He’s signed to a rock label now, his voice has coarsened, his “empowerment” rhetoric seems like a winking homage to the Seventies. Moreover, he produces music that defies all notions of danceability. It does, however, lend itself to bodies that shamble and stumble.