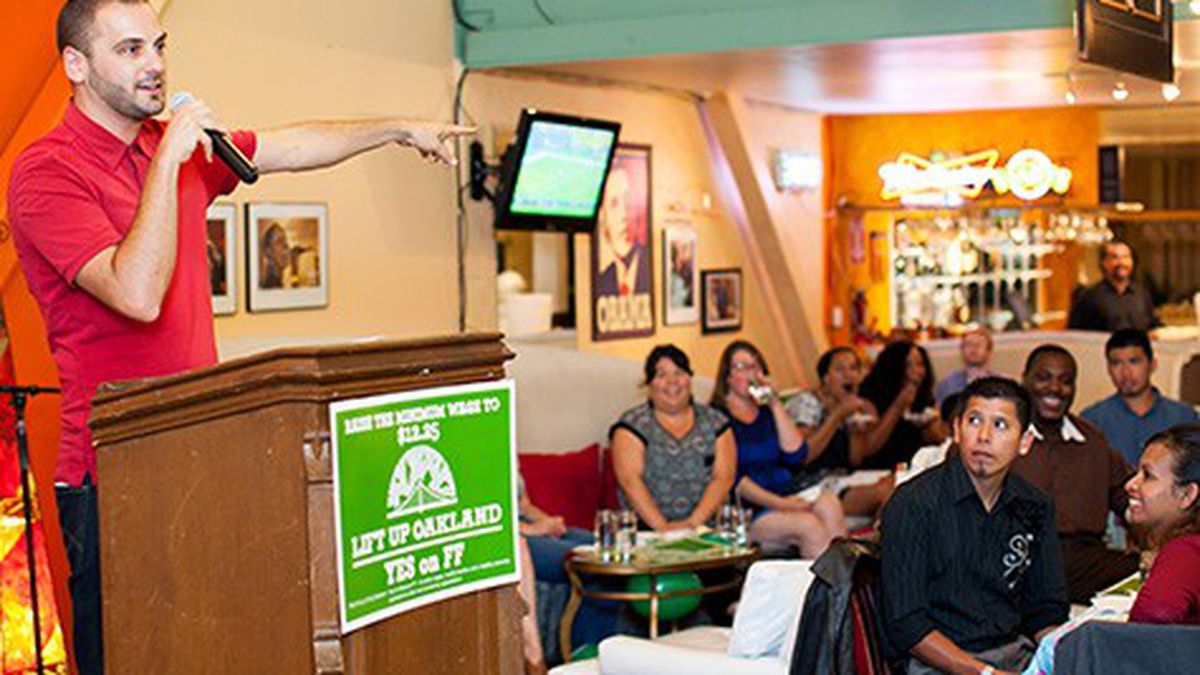 Voters will consider a number of left-leaning proposals, including an increase to the minimum wage, a parcel tax for public education, and good government reforms.

The most high-profile ballot measure in Oakland this election season is a proposal to increase the city’s minimum wage to $12.25 an hour. And if voter turnout is strong in November, the measure will likely prevail, said Shum Preston, spokesperson for Lift Up Oakland, the coalition pushing Measure FF. “We think that the minimum wage can attract voters to the polls. And when people vote, progressive measures in general win.”

If that logic holds true, most of the six ballot measures in Oakland have a shot at succeeding. In addition to the minimum wage hike, residents will have an opportunity to vote on a number of progressive ballot measures — proposals that, for the most part, have not attracted organized opposition. These include a tax to support a number of high-school education initiatives, a measure aimed at enhancing government ethics and transparency, and an amendment to reform the city’s redistricting process.

The most controversial proposal on the ballot is Measure Z, a public safety tax, which the Express will cover in a forthcoming article. For now, here is our summary of the city’s five other ballot measures.

The current minimum wage in Oakland is $9 per hour — the same as California’s minimum wage. Under Lift Up Oakland’s ballot proposal, that rate would rise to $12.25 on March 2, 2015, with annual cost-of-living increases thereafter. Lift Up estimates that as many as 48,000 workers would receive an immediate raise if the measure passes.

Measure FF would also require that employers provide paid sick leave to workers — five days for small businesses (those with fewer than ten employees) and nine days for larger companies. Earlier this year, the Oakland Metropolitan Chamber of Commerce opposed the measure and unsuccessfully tried to convince the city council to approve an alternative proposal this summer that would have established gradual pay increases over three years and exemptions for small businesses. However, the chamber did not file a formal opposition to Measure FF on the ballot.

In the final countdown to Election Day, Lift Up Oakland has been campaigning across the city and promoting the endorsements it has received from some small-business owners. “There is increasing support from restaurateurs and small business owners,” said Preston, adding that “raising the minimum wage … is overwhelmingly supported by the public.”

If Measure N passes, it would be the first parcel tax dedicated to high school achievement in Oakland public schools. The measure is specifically targeted toward reducing the dropout rate and helping Oakland high school students prepare for college. It calls for an increase in work opportunities and job training programs, as well as expanded mentoring, counseling, and support services.

“Even in California, this is probably one of, if not the only, local parcel tax measure that is aimed at investing in high schools and improving graduation and college-going rates,” said David Kakishiba, president of the Oakland school board.

If two-thirds of voters approve it, Measure N would establish a $120 parcel tax for ten years (with exemptions for low-income people and senior citizens). The resulting funding for Oakland Unified School District — roughly $12 to $13 million a year, or about $1,000 per student, according to Kakishiba — would go toward providing college-readiness programs to students throughout the district. The limited number of students who currently access this kind of service and programs have graduation rates of about 84 percent, Kakishiba said.

The so-called “Oakland College And Career Readiness For All Fund” would bring these initiatives to the rest of the city’s high school students, where the graduation rate is only 63 percent, according to the district. Supporters of the measure say that a tax is the only way to substantially expand college-readiness and job-training programs and could go a long way in reducing racial and socioeconomic disparities in student achievement.

“No amount of foundation grants or federal grants is going to bring this work to scale and for it to be self-sustaining,” said Kakishiba.

The spending plan in the measure stipulates that at least 90 percent of the funding must go directly to schools (as opposed to administrative costs) and that the district must allocate the revenue on a “per pupil basis,” meaning the amount of funding schools receive would be based on the number of students they serve. Schools would have to submit and get approval for specific education improvement plans, and the funding would go toward both traditional district public schools and charter schools (the latter of which are public entities that are privately operated).

No one has submitted an official argument against this measure.

Last year, the Alameda County Grand Jury determined that the Oakland Public Ethics Commission, the official watchdog of city government, was “unable to execute its responsibilities” given its very limited resources. For starters, since the commission first began operating in 1996, the city council has repeatedly provided it with little staffing.

The measure, which also has not attracted any official opposition, would enable the commission to reprimand and censure public officials for ethics and campaign violations and impose fines or penalties in excess of $1,000, which is the current limit. The measure would also better equip the commission to enforce a wide range of state and local ethics laws, including ones related to nepotism, conflict of interest, campaign finance, transparency, and lobbying. The proposal also reforms the selection process of the commissioners, allowing the mayor, the city attorney, and the city auditor to each appoint a commissioner (as opposed to the current system, in which the mayor makes the three nominations).

“It’s not their fault, but [the commission] has never been structured or given resources to really do the job that people expect it to do,” Kalb said of Oakland’s commission. “Now, we are finally — after eighteen years — changing that and giving it some real teeth and real authority and more independence.”

Kalb, along with city Councilmember Libby Schaaf, who is running for mayor, also sponsored a second good government charter amendment — one that would reform the process by which the city draws its council and school board district boundaries every ten years.

Measure DD would transfer redistricting authority from the councilmembers themselves to an independent thirteen-member commission. With councilmembers currently drawing their own districts, concerns about potential conflicts of interest and an overall lack of transparency abound. An independent redistricting effort — led by thirteen Oakland residents, selected through an application process with strict eligibility requirements — would be fairer and more inclusive, DD supporters say.

“One thing that we all need to be doing at City Hall in Oakland is to instill more confidence and trust in the public,” Kalb said. “We are taking action and showing that we are not the councils of the past.”

If the proposed reform passes — like Measure CC, it also has not inspired formal opposition — Oakland’s redistricting process would more closely match the system at the state level; in California, a citizen’s commission now draws Assembly, Senate, and Congressional seats, based on a statewide proposition that voters approved in 2010.

The next round of redistricting in Oakland would start in 2021 and would be based on new US Census data.

The most obscure charter amendment on the ballot, Measure EE, calls for cost-saving reforms to Oakland’s retirement pension plan for certain employees. The measure would enable the city council to terminate the Oakland Municipal Employees’ Retirement System (OMERS), the retirement pension plan that the city established in 1939 and then closed to new members in 1970 when the city began contracting with the California Public Employees’ Retirement System, or CalPERS.

The OMERS plan — which covered non-sworn employees, meaning everyone except cops and firefighters — currently has a total of just 22 members left in the program. That means annual administrative costs associated with dealing with so few program members are disproportionately high relative to the cost of the actual pension payments each year. Measure EE would allow for the termination of OMERS and the transition to a so-called “group annuity” contract with a private insurance company.

The bottom line, according to the proponents of the measure, is that this change would allow the city to cut down on administrative costs while ensuring the remaining retirees continue to receive all of their pension payments. The city would remain the ultimate guarantor of the payments.