How one Berkeley man turned a Zen performance art into a legitimate career. 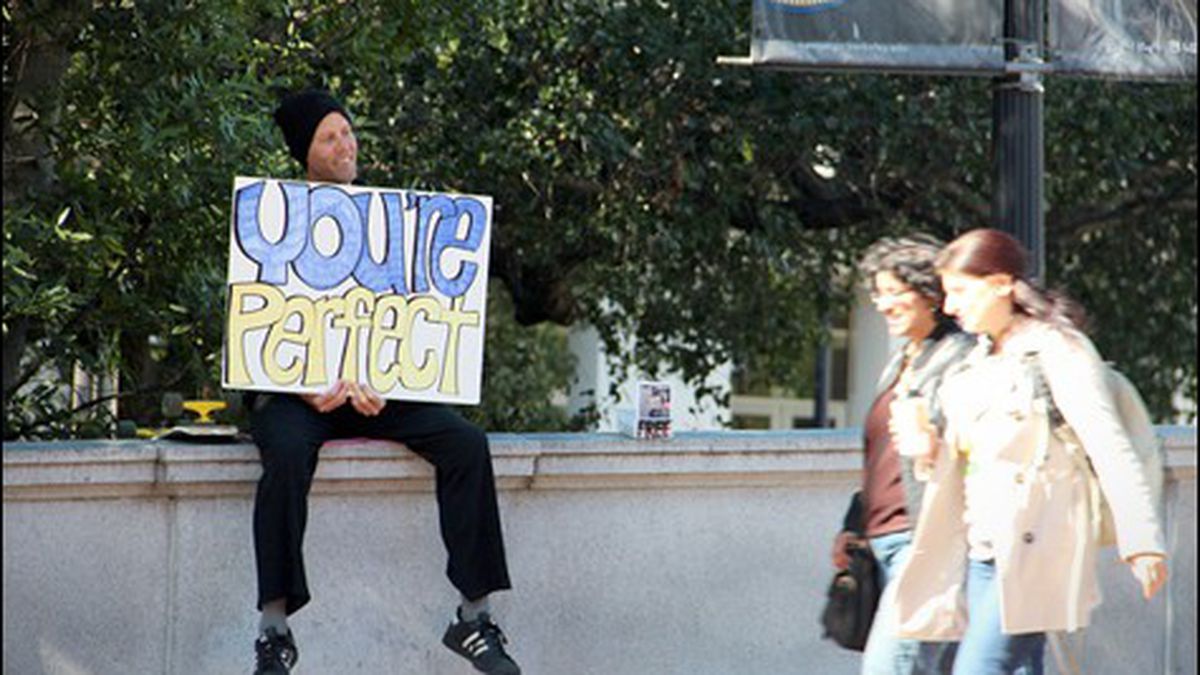 The bells of the campanile chime, and backpack-clad students fill UC Berkeley’s Sproul Plaza. In the shadows, Benjamin Smythe quietly sits on a low wall, his legs dangling, wide blue eyes staring ahead, lips wearing a constant, almost imperceptible smirk. Every few minutes, someone in the crowd looks up, catching a glimpse of Smythe and the cardboard sign resting on his lap. They smile, wave, and continue on their way.

Today, Smythe, 35, wears a navy polyester jacket and pants, Adidas sneakers, and a black backpack he doesn’t take off. He has a closely shaved head and two days’ worth of stubble. His eyes seem to take up most of his face, and he locks them, unblinking, on whomever he’s talking to.

In the passing crowd, one man stops, sets down a bag, pulls a camera out of his pocket, and points it at Smythe. After snapping a few pictures, he approaches cautiously, wearing a wide grin. “What do you mean?” he asks, pointing at the sign.

“What do I mean? I mean that you are perfect,” Smythe answers, beaming.

The man introduces himself as “Jin, from China,” then pushes forward unsatisfied. “But, what is the purpose?”

“To see you,” Smythe replies.

Jin blinks, unsure what to ask next.

“What is your occupation?” Jin says.

It is a funny life, indeed. Smythe doesn’t have a job, a car, or a phone, but he does have a website, a YouTube channel, and promotional postcards. Throughout today’s hour-long sign-holding session, similar interactions play out again and again. Passersby question Smythe’s motives, intention, and philosophy. Each time, he answers in oblique, practiced mantras that feel both vague and illuminating: “I’m not a crusader, I just love seeing people”; “I look at it as fishing for hearts”; “I’m like an ice cream man. I provide temporary relief, temporary moments of calm.”

For Smythe, this stint as sign-holder serves as his own temporary moment of calm — relief from the constraints of a static, ordinary life. The seed for this funny life was planted in 2005, when Smythe met a homeless man in Santa Monica who told strangers they were perfect. Several years later, during a particularly bad day, the memory of that encounter came flooding back. At the time, he was living in Idyllwild, a small mountain town in Southern California, and working in a kitchen — a job he hated. Smythe, inspired by this memory, made his first sign and held it on a street corner for several hours. “I wanted to start a new, creative life,” he said. “I wanted to find a job that isn’t a job. And it worked.”

Smythe has worked as an outdoor education teacher, a yoga instructor, and, most recently, as a line cook. He thinks of jobs as “different ways to play.” In 2009, Smythe quit his job and loaded all of his possessions onto his bike and rode away, abandoning his old life. He’s been holding his sign and telling people they are perfect since. “I just thought I’d try this for a while and see what happens,” Smythe said.

When he started holding the “You’re Perfect” sign, he saw the act “as a way to get over myself and to connect with people.” At first, it was terrifying. It felt forced and inauthentic. When asked, he felt compelled to explain his random, public affirmation of strangers — his strange Zen performance project. Now, more than two years later, the terror is gone, replaced by a calm playfulness. “It’s like hacky sack,” he said. “The sign is an object I play with. Just play. It’s not as serious as it seems.” If people argue with the sign’s message, he calmly responds, “That’s perfect, too.”

Through hundreds of hours of sign-holding, Smythe has anthropologically divided people’s responses into four tidy categories: yes, no, okay, and cool. “Yes” means smiles, waves, and thumbs-ups. “No” — shouted expletives, flying objects — is the most rare. “Okay”— diverted glances, indifferent shrugs — is by far the most frequent. “Cool” means hugs, high-fives, and “thank yous!”

What started as a fun game has evolved into much more. “The guy with the sign” has become Smythe’s distinct public persona — in Berkeley, online, and abroad. Around the time he quit his kitchen job and started holding the sign full-time, he set up his website, BenjaminTSmythe.com, and started uploading videos to YouTube. The videos vary in style — most are webcam-type confessionals with Smythe discussing at length issues of existence, self, identity, and awareness. To date, his channel has more than 1,700 subscribers — a community of devoted followers who have helped fuel, and fund, Smythe’s new life.

Last year, he posted a video with an offer: cover all costs and he’ll come live with you for a week. After 24 hours and a flood of responses, he had to take the video down.

Since then, he has traveled throughout the United States, Europe, and, most recently, New Zealand and Australia, living with strangers, holding his sign, and playing his game. In East Berlin, he stayed with a poor couple in a one-bedroom apartment — his sign read “Du Bist Perfekt.” In the coastal resort town of Rimini in northern Italy, he roomed with a woman whose mother made him lunch every day — “Sei Perfetto.”

He says his host’s motivations are always different, and often remain a mystery to him. Some people want companionship, spiritual guidance, or just a quirky, American guest.

In the coming months, Smythe has scheduled visits to Prescott, Phoenix, Seattle, and Asheville. He says the past six months have been crazy. “I’ve been overwhelmed. I’m like a taco stand and we’ve run out of beans.” But Smythe has found a way to live off those beans. Last November, with his savings running out, he posted a video asking for donations that would allow him to continue this new, creative way of living. He calculated a year’s worth of expenses, $28 a day for rent, food, health insurance, and various bills, and set his goal at $10,000. Through many small donations, he reached his goal in just over three weeks.

“My dad always asks, ‘What do you do exactly?'” Smythe said. “Then when I tell him, he says, ‘People pay you for that?'”

Still, Smythe is considering doing something else eventually, as his restlessness clashes with the ever-looming practicalities of life. “I wish I was excited about it and saw myself holding the sign forever, because it does work,” he said. “But, at some point, I’ll need to make a living.”&#8;

Next ArticleMid-Week Menu: Rico’s Comes to Temescal, Christopher Lee Kicks Ass in NYC, and Have You Heard About Uptown?