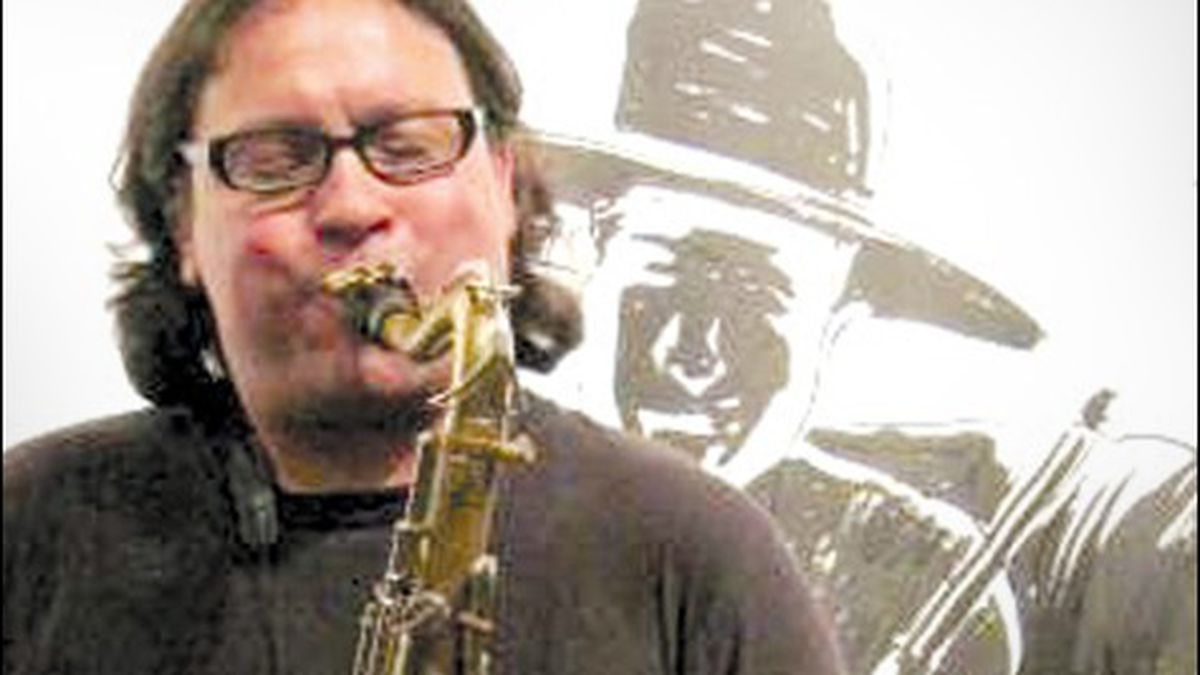 The Humble Life of Phillip Greenlief

One of the Bay Area's most prolific composers, Greenlief spends little time tending his career.

Some musicians embrace eclecticism as a tactic to showcase their stylistic breadth. For Oakland saxophonist Phillip Greenlief, a grab bag repertoire represents a capaciously catholic sensibility rather than calculation. A galvanizing force on the Bay Area music scene for almost two decades, he’s a tireless organizer and grassroots networker with a knack for bringing musicians together in a constantly shifting array of settings, from solo recitals and one-off free improv sessions to ongoing concert series, international collaborations, and long-running ensembles that have honed singular sounds. A thoughtful and passionate improviser perfectly at home in unstructured musical settings, he’s also a prolific composer.

No band better represents his wide-open ears than The Lost Trio with bassist Dan Seamans and drummer Tom Hassett, a group that brings the same gruff, unfussy eloquence to tunes by Hank Williams and Herbie Nichols, Billy Strayhorn and Nino Rota, Irving Berlin and Joni Mitchell, Beck and Bjork. Launched about 17 years ago, the group recently released its fifth album, “Mysterious Toboggan,” on Greenlief’s invaluable label Evander Music, which has documented some of the region’s most creative musicians. The Lost Trio celebrates the CD’s release Sunday afternoon at Café Royal in San Francisco. While the group is focusing more on original material these days, Greenlief launched the stripped-down ensemble as a vehicle to investigate tunes beyond the standard jazz repertoire, whether the source was Tin Pan Alley, Nashville, or Iceland.

“I’m surprised we haven’t brought more Motown into the band,” said Greenlief, 52, who grew up in Los Angeles. “We all bring CDs on the road, and that’s where the repertoire comes from. We’re listening to an album and ‘Oh my God, this is such a great song! Why don’t we do this?’ If we had the money and resources we could go into the studio and make albums dedicated to Monk and Nino Rota right now. There are tons of songs we’ve been playing for years and years that we haven’t had a chance to record yet.”

When people talk about a music scene, what they really mean is the interlocking relationships, alliances, and shared aesthetic values that elevate individual performances into part of a wider, ongoing converstation. Greenlief is one of the Bay Area’s essential facilitators, though even his most fruitful efforts have tended to land quietly, while often rippling out in ever-widening circles. Over the past fifteen years or so Greenlief has released more than four dozen albums on Evander Music, including memorable sessions by pianist/composer Graham Connah‘s Jettison Slinkey, bassist Todd Sickafoose, drummer Jeremy Steinkoler‘s relentlessly funky Mo’Fone, trumpeter/vocalist Sarah Wilson, trumpeter Darren Johnston‘s United Brassworkers Front, and drummer/vibraphonist Smith Dobson V. Greenlief hasn’t been able to take advantage of the rise of online distribution, and these days he’s mostly using Evander for his own music.

“The money just isn’t there to do what we were able to do before,” Greenlief said. “I haven’t adapted to the world of digtal downloading. I’m just trying to put my music on the front burner, playing with groups I love, and get us out working.” He admitted to having an ambivalent relationship with “the whole career thing.” “I’m not pushy and schmoozy,” Greenlief explained. “I want it to happen slowly. I don’t have the kind of drive to be sending packages off to Monterey to get gigs.”

What Greenlief might lack in career ambition he’s made up for in propitious timing. He developed the idea for Evander Music through his contact with Los Angeles multi-instrumentalist Vinny Golia, whose 9 Winds label has documented hundreds of left-field improvisers. Greenlief had moved back to the Southland after years in Vancouver and the Bay Area to study at USC, and he landed in the midst of a scene rife with heavyweight improvisers just when he was ready to soak up the experience.

“I found the LA scene incredibly welcoming and warm-hearted,” Greenlief said. “The attitude was, ‘Just jump in, the water’s fine.’ I was playing with Tootie Heath and Walter Booker, players way down the road from where I was. That’s when I really started to get serious about composing and getting my own groups together. When I finished USC I had the confidence to call these people up and say, ‘I’ve got a bunch of tunes, let’s play.'”

Returning to the Bay Area in 1993, he brought his LA contacts with him, and played a vital role in bridging the state’s north/south musical divide. He made numerous introductions that grew into productive relationships, including connecting Nels Cline with drummer Scott Amendola and bassist Trevor Dunn (who now play together in the Nels Cline Singers when the guitarist isn’t on the road with Wilco).

“I’m still introducing people who I can’t believe don’t know each other,” said Greenlief, who performs Thursday at the Starry Plough with Amendola and LA guitarist G.E. Stinson. “I’m happy to try to continue connecting people so the music grows and stays alive.”

Greenlief’s ongoing project with ROVA baritone saxophonist Jon Raskin, called 2+2, is a perfect example of his savvy use of musical connections and curratorial accumen. Running almost monthly at 21 Grand for several years, 2+2 pairs the saxophonists with two players on similar instruments. Last month, they joined forces with bassist Mark Dresser and Barre Phillips. In tennis terms, that’s kind of like playing doubles with Roger Federer and Rafael Nadal. Greenlief next performs with Raskin as part of the Berkeley Arts Festival on July 16 in FPR, a saxophone trio with powerhouse German reed player Frank Gratkowski.

“The thing about Phillip is that he meets people and they want to work with him,” Raskin said. “He’s a really committed improviser who likes to play in lots of different situations. He’s always out there looking for new gigs. He likes to produce concerts, start groups, start projects, and he’s networking the whole time. He goes to Europe, goes to Berlin, and meets a bunch of musicians. They come to the US and call him, and he gets a concert together.”

If Greenlief seems to draw from a bottomless well of inspiration, it’s partly because he uses music to engage emotionally and intellectually with other art forms. An avid cinephile with a keen eye for visual arts and a masters degree in English lit from the University of Southern California, he’s recorded albums investigating Virginia Woolf (Ashley Adams‘ fierce Flowers for Mrs. Dalloway), Robert Rauschenberg, and Eva Hesse (on his upcoming solo sax session Lines Combined).

A brilliant but unreleased project featuring his Kaleidoscopic Sextet, Beauty Is a Rare Ticket That Exploded, features a three-movement concerto woven from Ornette Coleman’s compositions, cut-up and rearranged à la William S. Burroughs’ Naked Lunch. (The title stems from Coleman’s composition “Beauty Is a Rare Thing.”) And his captivating trio Citta di Vitti, featuring bassist Lisa Mezzacappa and drummer John Hanes, explores a body of ravishing, spacious, and angst-ridden music he composed in response to the films of Antonioni. For a guy who doesn’t spend much time tending his career, Greenlief has built a body of work that’s impressive by any measure.

Greenlief doesn’t miss that irony. “I have nothing to complain about,” he said. “I’m doing everything I want to do. It would be nice if magazines were promoting me, and I was getting big festival gigs, but I’m happy living the humble life. I just want to keep exploring how I can get better as a saxophonist, expanding my vocabulary as a musician.”

Correction: An earlier version of this story misstated both the name of one of Greenlief’s musical groups and the duration of his 2 + 2 series at 21 Grand.

More Than Meets the Eye