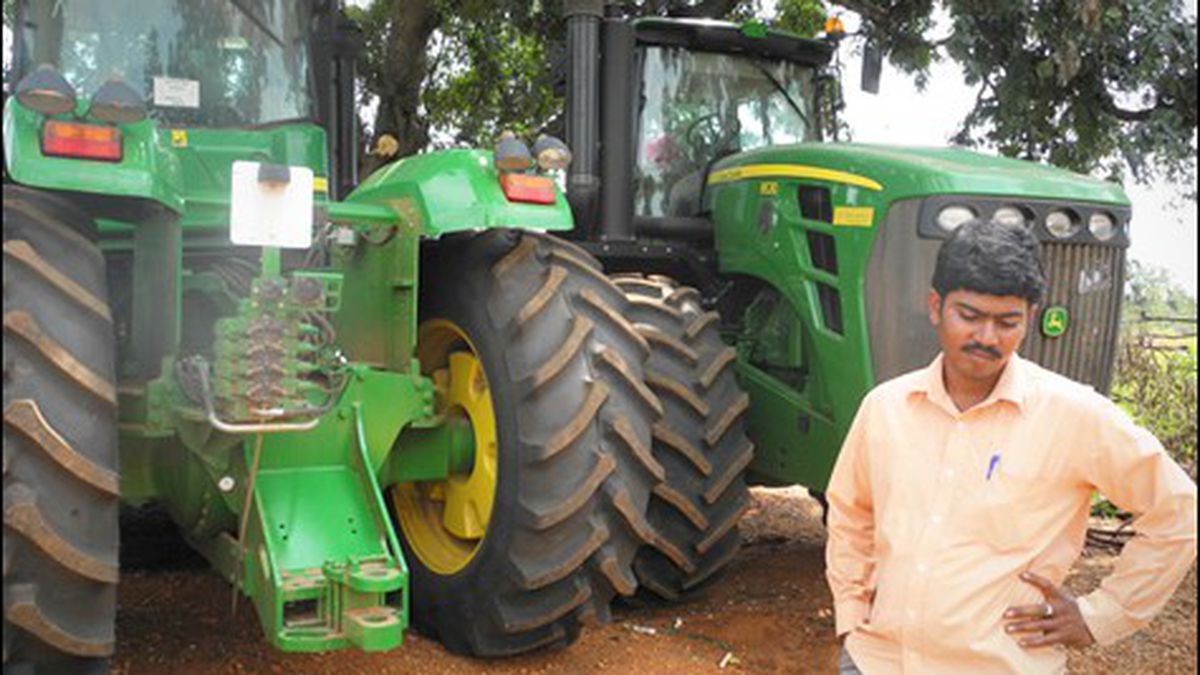 The Oakland Institute is shining a light on the disturbing new trend of impoverished nations selling their agricultural land to wealthy countries and large corporations.

Anuradha Mittal is an energetic woman who talks at a quick, sometimes abbreviated clip. In her East Oakland office, the agricultural-rights activist recently retold a story of one of her trips to Africa. “I was in Zambia a few years ago sitting in the Ministry of Agriculture with a very high-up guy,” she recalled. “The government was starting a farm-block scheme where a million hectares of land was to be given away to major foreign investors. I asked this official, ‘What is the purpose of this?’ He says, ‘Well, poverty alleviation and economic development.'”

A skeptical look came over Mittal’s face. “I asked, ‘How are you going to accomplish that? Do investors have to put in or pay for infrastructure?'” she continued, smiling wryly, remembering the exchange, almost three years ago. “I kept asking him questions,” Mittal explained. “‘You’re going to make them pay taxes, right?’ He said, ‘Oh no, no taxes.’ I said, ‘Okay, are you going to ask them to create a certain number of jobs?’ ‘Oh no,’ he said, ‘We’re just asking for some general language. They don’t have to do much. They don’t have to give hard numbers.’ So I asked, ‘Well, you must be getting a lot of money for this land then, huh?’ ‘Oh no, it’s almost nothing. Investors just have to pay $5,000 for an application.'”

In other words, Mittal was told that 20,000 hectare blocks of land were literally being given away by the government. The motivations for the land giveaways in Africa and in poor nations around the globe vary and can include public corruption, the need for quick cash to shore up ailing government finances, or political payback against rural residents who live on state-owned lands and may oppose their powerful rulers.

Mittal listened incredulously to the Zambian official while he described transferring control of the country’s richest agricultural lands to foreign interests. It’s part of a phenomenon Mittal and others have defined as “land grabs” because it virtually always involves displacing local communities and stripping them of access to areas they have traditionally farmed, used as pasturage, or foraged.

Finishing her story, Mittal said the real kicker came when the official admitted that the scheme would probably worsen the condition of several million Zambians who live in the countryside and practice small-scale, organic agriculture. “This guy leans in close to me and says, ‘If you want to put in a tender, Ms. Mittal, here’s my Gmail account. I can be your person on the ground.'” Given Mittal’s calling in life it was an audacious and absurd offer.

Mittal coordinates the Oakland Institute, a think tank comprising dozens of scholars from all over the world. They each possess a commitment to defending the land rights and food systems of local communities, and are connected to a global network of grassroots activists who rely on their information and analysis. “Our experts are people on the ground,” Mittal said. “When we talk about food aid, it’s people who are leading that fight, people who have actually been in the relief centers for years. Our experts have a narrative, which, because they’re from the community, can appeal to the people in the community affected.”

The Oakland Institute is a leading voice in exposing a new wave of global land grabs by international investors who seek to control agricultural lands. While big deals have been inked in Asia and Latin America, it’s Africa where the land grab has done the most harm so far. According to Mittal’s research, Africa constitutes 70 percent of investor demand. Land is inexpensive in Africa, but it’s also home to hundreds of millions of rural families, mostly small-holder farmers and pastoralists, many of whom live on and work lands targeted by investors.

According to Mittal, there are three kinds of investors: food-insecure nations, private equity funds seeking to take advantage of cheap land prices, and agribusiness corporations. Each has a slightly different motivation. Oil-rich nations like Saudi Arabia, where water and arable land are scarce, are seeking to insulate themselves from price fluctuations in global commodity markets by producing their own beef, corn, and sugar for import. Private equity funds based in financial centers like New York and London are seeking profitable returns on investments. Large agribusiness corporations — growing food, fibers, or biofuels — are also lured by profits, and bring the farming know-how to many deals.

Mittal’s research, as well as figures provided by the World Bank — an institution she often spars with — show that nearly 60 million hectares of agricultural land have been leased or sold to mostly foreign investors in Africa since 2008. For some perspective, that’s equal to 148 million acres, a patchwork of holdings larger than the entire state of California, which measures about 100 million acres in total. All of California’s farm and pasturelands, the most profitable in the world, add up to only 25 million acres, according to the US Department of Agriculture. That’s a mere 17 percent of the landmass gobbled up recently by foreign investors in Africa.

The Oakland Institute’s case studies of the land grab phenomenon across sub-Saharan Africa fingers the World Bank as a key enabler. According to the institute’s oft-cited 2010 report, (Mis)Investment in Agriculture, “through the promotion of policies and technical assistance to governments in order to spur foreign direct investment in agriculture in developing countries, the World Bank agencies are enabling a trend that threatens global food security and the livelihoods of small-scale farmers.”

Mittal and her team say that blame also lies with many national governments who are eager to cooperate for their own reasons. “The thing is that in Africa,” Mittal said, “because of the colonial heritage, communal lands, lands that you and your ancestors might have worked forever, these are all considered state-owned lands today. So the central government can say, ‘It’s state land, and you’re a squatter. We’re going to just move you so the land is available for investors.'”

Many regimes, such as the ruling government in Addis Ababa, Ethiopia, have done exactly this, displacing indigenous peoples of the country’s Omo Valley, for example. Across Africa, in fact, land grabs facilitated by World Bank technocrats are allowing factions within the central governments to tighten their grip on power, to punish rebellious ethnic groups, and amass personal fortunes at the expense of the nation.

Mittal travels frequently on fact-finding missions, and to consult with foreign governments and international institutions. Just last month she was in southern Sudan where hundreds of thousands currently face famine conditions.

But she always returns to the Bay Area. And while Oakland might seem like an odd place for a globally-focused nonprofit like the Oakland Institute, Mittal says it makes perfect sense. “For Oakland, all the stuff that we’re talking about is not only about Africa. It’s really about our lives.”

Since its founding in 2004, the Oakland Institute has partnered with several East Bay organizations dedicated to food security and human rights. In 2008, the institute teamed up with the St. Mary’s Center, a seniors’ service provider in downtown Oakland, to publish Growing Gray in the Golden State, a comprehensive report on the plight of low-income seniors in the East Bay. Although most of their research and data reflected conditions prior to the Great Recession, they nevertheless remarked that the “2008-09 California Budget includes cuts that will severely and adversely impact safety-net services for seniors, children, families and people with disabilities.” Needless to say, this trend has only worsened.

In 2007, the Oakland Institute studied the impacts of supermarket consolidation on the local food system, with an eye especially on the “food deserts” of West and East Oakland. Oakland Institute fellow Katy Mamen, author of Facing Goliath: Challenging the Impacts of Supermarket Consolidation on our Local Economies, Communities, and Food Security, wrote that, “a healthy future for communities across the country depends on strong local food economies that are diverse, equitable, and sustainable.”

That’s a message that will resonate with many East Bay residents. Oakland and Berkeley are already host to more farmers’ markets than almost anywhere else in America. The East Bay also is home to numerous organizations focused on food education and justice, from the People’s Grocery and Phat Beets Produce to the Oakland Food Connection and Willard Middle School Garden.

Mittal has much praise for these local positive change-makers, all of whom she counts as friends and colleagues (and some of whom she even shares an office building with). She’s insistent, however, that efforts to change the way food is grown and land is utilized, from Oakland to Africa, must include rigorous research and a strong political component. “It’s very important that you and I support our community-supported agriculture, that we support our farmers’ markets,” she said. “But if we are not challenging what’s happening in Washington, DC, our efforts to create new things on the ground locally will eventually fail.

These days Mittal and the Oakland Institute are focusing intensely on changing the political environment that has dangerously undervalued African lands and communities and facilitated the phenomenon of land grabs on that continent. “A couple years ago nobody was talking about this as a problem. We’ve identified it, shown what’s wrong with it. Now it’s time to start working on solutions.”

US Mayors Gathering, Paid for by Municipal Contractors, Draws Protest Against...