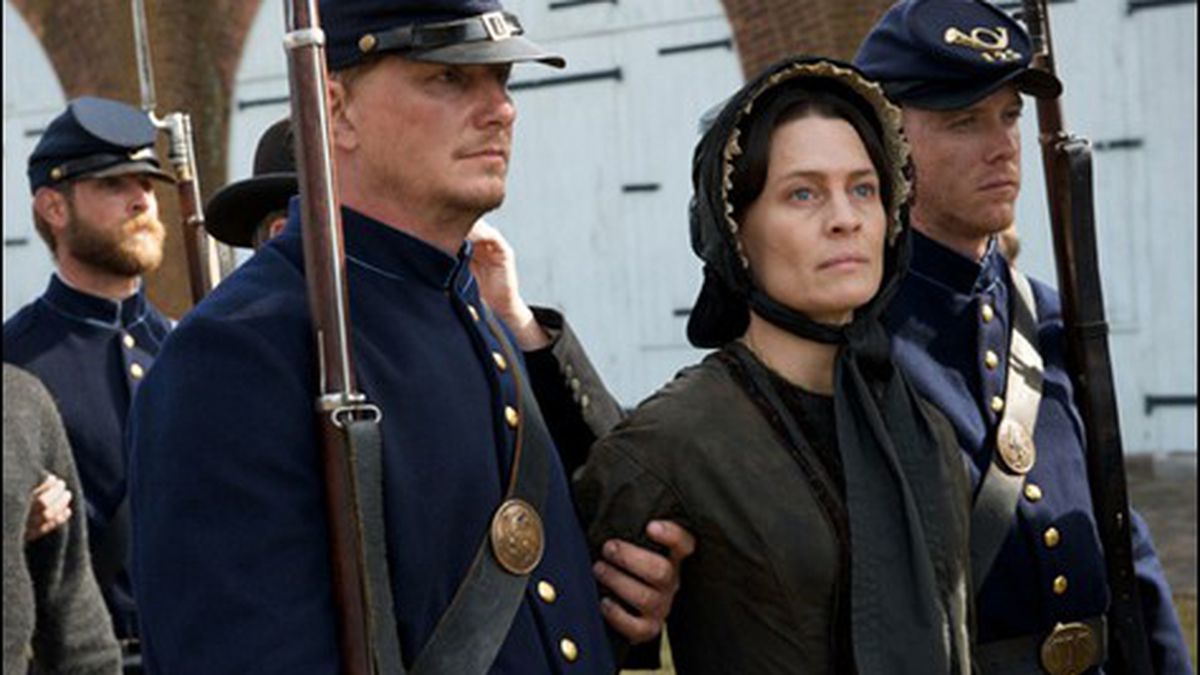 Meet Robert Redford and D.W. Griffith, fun couple. For proof that the world of movies makes strange bedfellows, look no further than The Conspirator, Redford’s Civil War historical drama, produced by the American Film Company, about the aftermath of Abraham Lincoln’s assassination on April 14, 1865.

For his dramatized examination of the hasty trial and speedy execution of boardinghouse keeper Mary Surratt (Robin Wright) and other acquaintances of the assassin John Wilkes Booth (played by Toby Kebbell), director Redford — with help from writers James D. Solomon and Gregory Bernstein — revisits the heart of Griffith territory, specifically the night that Booth, the most famous actor of his day and a disgruntled Southern sympathizer, crept up on Lincoln as the president was enjoying the stage farce Our American Cousin at Ford’s Theatre in Washington, DC, and fatally wounded him with a pistol.

The Lincoln assassination scene in Griffith’s problematic masterpiece The Birth of a Nation (1915) remains the single best screen depiction of that event, but Redford & Co. go ahead and give it a try anyway for their version. In fact, in tackling such a far-fetched subject 146 years after the fact, the Sundance Kid deserves a medal from the appropriate historical society. He’ll almost certainly get one, but in the meantime The Conspirator arrives on the nation’s screens as the most specialized of special-interest entertainments: a docudrama that most audiences have no way in hell to relate to. Not surprisingly, it’s built like a brick guardhouse.

Attorney Frederick Aiken (James McAvoy), a former US Army officer recently discharged for his war wounds, lets himself be talked into defending Mrs. Surratt in the military tribunal convened to try her and seven other defendants for conspiring to murder Lincoln and several cabinet members. At first, Aiken sees the assignment as a way to jump-start his career as a Washington lawyer, but Mrs. Surratt’s dignified demeanor and forthrightness moves him. To the Yankee officers she’s a triple outsider — a woman, a rebel, and a Roman Catholic — and her stated motivation is to protect her son, John (Johnny Simmons), a fugitive on the run from the same conspiracy charges. Aside from that, Mrs. Surratt admits to hating Lincoln, and to opening her boardinghouse to secret meetings of the other defendants. On every other charge she remains defiantly silent.

Shades of The Birth of a Nation. We should probably be thankful that Mrs. Surratt did not organize a band of night riders and begin lynching emancipated slaves, but otherwise she’s a character the similarly unrepentant Confederate supporter Griffith could admire. Before quietly going to the gallows she impresses Aiken, but not Major General David Hunter (Colm Meaney), chief of the tribunal, with her steely intransigence. Ms. Wright’s performance is appropriately damped down, eloquently inarticulate. If we have trouble identifying with her, Mary Surratt seems to be telling us, it’s our fault and none of hers.

McAvoy brings his patented quiet civility (Atonement, The Last Station) to the part of Aiken, who paid the price for his diligent lawyering by becoming one of the most despised men in DC. The richly filled-out supporting cast features a roster of character actors who might have handled the Aiken role if the film had been made twenty years ago: Kevin Kline, unrecognizable behind facial hair as War Secretary Edwin Stanton, the de facto military dictator of the US; Danny Huston as Judge Advocate General Joseph Holt; and Tom Wilkinson as attorney Reverdy Johnson, who hired Aiken to defend Mrs. Surratt. Lincoln is impersonated by Gerald Bestrom.

Not all of the characters are old men. Evan Rachel Wood does a nice job as Anna Surratt, perplexed daughter of the accused. Alexis Bledel plays Aiken’s neglected fiancée Sarah Weston — not much time for her. And we’re treated to the sight and sound of Justin Long singing, as Aiken’s friend Nicholas Baker. Long is the only actor in the cast who looks wrong for the 19th century — we keep expecting him to whip out a cell phone.

Redford and his writers might have contemporary parallels on their minds — Guantanamo, the military mindset, political incivility in general — but they don’t throw much of a lifeline to 21st-century audiences who may have dozed through American History class. In mood and form, this arguably worthwhile curiosity might have been made for Warner Bros. in 1939. The point is made that the US government, fresh from a bloody civil war, was anxious to hang the defendants quickly and get on with the urgent task of rebuilding the nation. Cantankerous Mrs. Surratt happened to fit the frame perfectly. Expediency won out over more than a shadow of a doubt. If The Conspirator is seen by only a handful of people, yet causes them to reflect on the guilt or innocence of any number of modern-day Mary Surratts, that’s probably a good thing.

Up a Creek with the City Council

25 Reasons Why You Shouldn’t Vote for Don Perata