The compound Cannabidiol is turning up in everything from FDA-approved medicines to dubious hand-labeled tinctures. How should consumers navigate this new frontier of cannabis legalization? 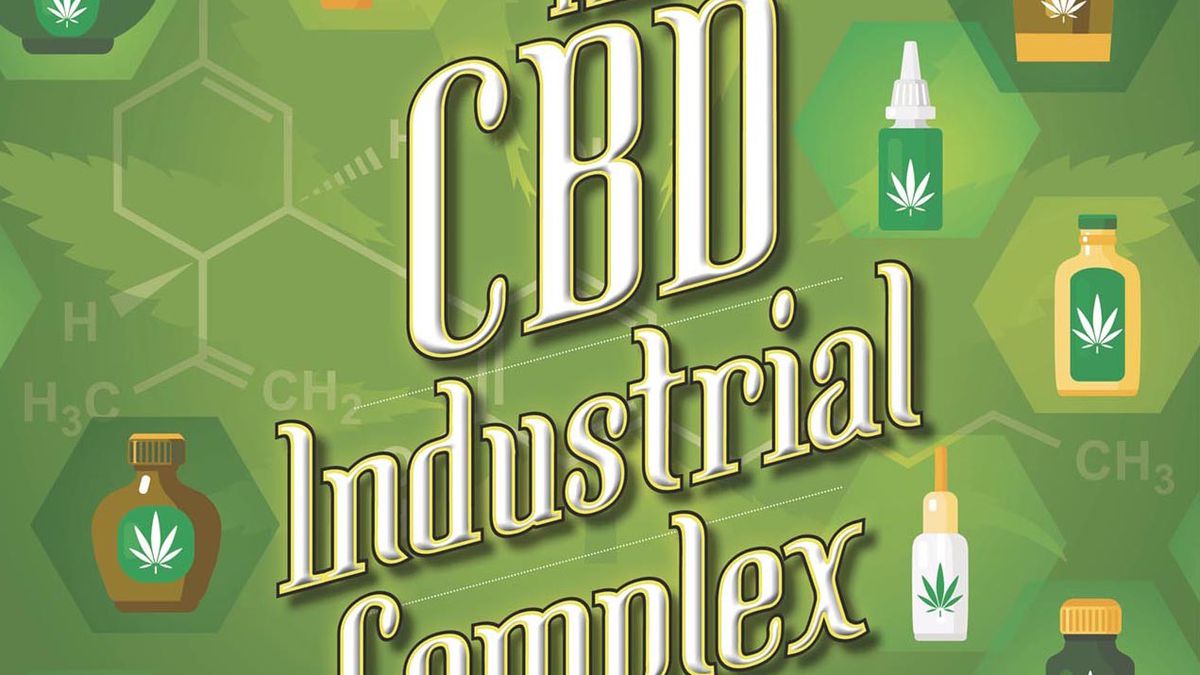 Times are weird for CBD, the increasingly popular, non-psychoactive component of the cannabis plant, which can be used to relieve pain, anxiety, seizures, and, perhaps, other ailments. Just a few years ago, most people hadn’t even heard of it, but now, even though it’s still of uncertain legality both nationally and in California, outlets like CVS and Walgreen’s are gearing up to sell it, and producers are piling into the market. Some of them are among the most prestigious players in cannabis, and some of them are marginal sleazebags whose products might not even contain any CBD, but might contain lead or other extremely dangerous substances. Meanwhile, entrepreneurs are putting the stuff in candies, baked goods, and even water. The investment bank Cowen Inc. expects the CBD market to grow from $1 billion annually this year to more than $16 billion by 2025.

Even if all the hype, chicanery, and legal confusion were absent, CBD, an acronym for the compound Cannabidiol, would still bewilder most people. That’s largely because marijuana is illegal at the federal level, so testing of the cannabis plant — and the possible health benefits and drawbacks of its various components — has been rare and hard to finance. Until December, hemp (also a cannabis plant, and the cousin of marijuana, from which a lot of CBD is extracted) was also outlawed. Its legalization with the passage of last year’s Farm Bill sent an already-hype-filled market into an outright frenzy. Would-be consumers have a lot of questions, and not all of them are easily answered.

What is CBD good for? (Answer: outside of a few conditions for which it has proven effective, it’s hard to know). Will it relieve my arthritis pain? (Answer: it well might). Will CBD cure my brain cancer? (Answer: no). Which particular CBD product is right for me? (Answer: even the most knowledgeable experts can’t tell you for sure). Should I use a CBD product that also includes THC, the cannabis component that gets you high? (Answer: maybe.)

What effect a given CBD concoction will have for a given person “is completely subjective,” said Étienne Fontán, director of the Berkeley Patients Group, which has been operating since 1999, making it the oldest cannabis dispensary in the country that’s still in business.

Research on CBD is finally beginning to pile up, but there are still far more unknowns than knowns. There is ample evidence that CBD can relieve, or even cure, certain kinds of seizure disorders, which is why the FDA last year approved the sale of Epidiolex, a CBD product aimed at relieving the symptoms of two types of epileptic disorders. That is so far the only pharmaceutical approved for use in the United States. Meanwhile, there are strong indications that CBD can relieve problems like chronic pain, anxiety, nausea, lack of appetite, and insomnia. For other ailments, there is much less solid research, but more is being conducted all the time, including on serious illnesses like cancer.

Adding to the uncertainty is the dubious legal status of CBD derived from hemp. The federal law is confusing because, while Congress approved the cultivation of the hemp plant, the Food and Drug Administration doesn’t allow hemp ingredients to be sold for human consumption, or for use in cosmetics. And California is at the moment in a perverse situation, where CBD derived from marijuana is legal, but CBD derived from hemp (which contains no psychoactive ingredients) is not. This will change in the coming months if the state legislature passes AB-228, which essentially would circumvent the FDA’s rules, just as pot’s legality in California circumvents the federal government’s prohibition of it.

This all means that the CBD market amounts to “one, big experiment,” said Martin Lee, director of the Santa Rosa-based Project CBD, and author of the 2012 book Smoke Signals: A Social History of Marijuana — Medical, Recreational and Scientific. The federal government, he said, “has abdicated its responsibility” by not regulating CBD beyond having the FDA levy fines against producers who make health claims on their labels or in advertising — a big no-no that legitimate CBD makers know to avoid. (More marginal producers continue to do it, though, which can be a big problem, said Daniel Shortt, an attorney who specializes in the law surrounding CBD and hemp for the cannabis-focused law firm Harris Bricken. “It’s an extreme example,” he said, “but if a CBD company says its product cures cancer, some people might believe it, and give up chemotherapy.”)

“The more regulation we get, the better for all of us,” said Eric Gershoni, product manager in charge of CBD for the Oakland-based Jetty Extracts.

At the heart of the legal distinction between hemp-derived CBD and marijuana-derived CBD is an inescapable bit of illogic, Fontán said. “It just doesn’t make any sense, because CBD is CBD, no matter where it comes from. It’s a chemical.”

So how should the average consumer looking for relief from, say, pain or anxiety approach this bewildering situation? “Carefully,” Lee said. It will be a while before the dust settles and there are standards and regulations that everybody can easily understand and adhere to. For now, he added, the market is “pretty much entirely unregulated, and that’s going to cause problems.”

Fontán of BPG agrees, but — as a dispensary operator facing competition from the likes of both giant corporations and fly-by-night operators — he is much more critical of the current situation. “Ninety percent of CBD products are fake,” he declared.

That might well be true. A few weeks ago, the Van Nuys-based laboratory CannaSafe released the results of a study concluding that “most” of the CBD products on the market contain very little CBD, and that many of them contain contaminants like ethanol, ethylene oxide, and other dangerous substances. CannaSafe released its study exclusively to the news site Business Insider, which reported that the lab based its findings on blind tests of 20 CBD products, which it did not identify. The products included vapes, beverages, candies, softgels, and oils, among others. Only three of the 20 products matched the claims on their labels, the CannaSafe study reported.

Lee of Project CBD, who hadn’t previously heard about the study, noted that, while there was no reason to dispute the findings, a lab selling its services might have reason to play up the results. “There might be a bias there,” he said. CannaSafe has been in business since November of 2016. Aaron Riley, its CEO, previously sold luxury cars and ran a company called Grade A Investments Inc. in Florida. He did not respond to multiple requests for comment.

Whatever might be the proportion of CBD in the marketplace that is fraudulent and/or dangerous, there is obviously enough dicey stuff out there that consumers should be extra-cautious. Fontán said he recently was in Maui at a shop that sold shirts, hats, and other items aimed at tourists. Among its products were bottles of what purported to be CBD extract bearing handwritten labels. There have been reports of similar products being sold in stores up and down California. In such situations, Fontán said, “you have no idea what the fuck you’re getting.”

Lee and Fontán agree that the best bet for consumers in California and in any other state where CBD is legal is to buy only from licensed cannabis dispensaries. That advice, Lee said, will hold up even after outfits like CVS start carrying CBD. After all, the big drug chains carry lots of dietary supplements that legitimate researchers consider dubious in terms of their efficacy. There’s no reason to think that the CBD products they decide to carry will be any different. “The products are likely OK, but not really impressive,” Lee said. For starters, they will likely have very low levels of CBD, in which case consumers “would need to take really high doses” to get the desired effect.

CBD products from licensed California dispensaries or delivery services, however, are required to be lab-tested, and to indicate to consumers exactly what’s in them. The labels can’t include health claims, but a knowledgeable budtender in a licensed dispensary will be able to help a consumer in a way that a CVS clerk will not.

But buying from a reputable, licensed cannabis dispensary or delivery service is just the first step. There will still be a lot of uncertainty (just as there often is with pharmaceuticals, it should be noted). Trying to research CBD on the Internet just adds to the confusion, as there is a ton of bullshit out there. The pot world is full of crazies who like to make a lot of indiscriminate claims, like that cannabis (including CBD) will cure just about every disease there is. Many of the same people also declare that “hemp will save the world,” and that George and Martha Washington got stoned every night at Mount Vernon. The problem is, those kinds of claims come up pretty high in Google results. More helpful are dedicated sites like Leafly.com, which publish only responsible, vetted information. While Lee’s site, ProjectCBD.org, is certainly an organ of advocacy, it, too, is based on empirical facts rather than the flights of fancy of some random stoner. Among its offerings is a handy “beginner’s guide” to CBD.

A major question for researchers now is how important the so-called “entourage effect” might be. That is: whether CBD can work well on its own, or is best taken in tandem with THC and other components of the cannabis plant. There is a fair amount of evidence that for many ailments, it’s best to combine CBD with at least a little THC. But a lot more study is needed before researchers can say with certainty which proportions work best for which ailments.

For consumers, that might mean a lot of trial and error. “Ask questions, do your research,” Fontán advises. It might take several trips to the pot shop before a consumer finally lands on the right concoction. If a pure CBD product doesn’t to the trick, maybe a 20:1 CBD-to-THC ratio will do it (this would be unlikely to get you very high, if at all). If that doesn’t work, maybe try a 3:1. “It’s a matter of patience and time,” Fontán said.&#8;