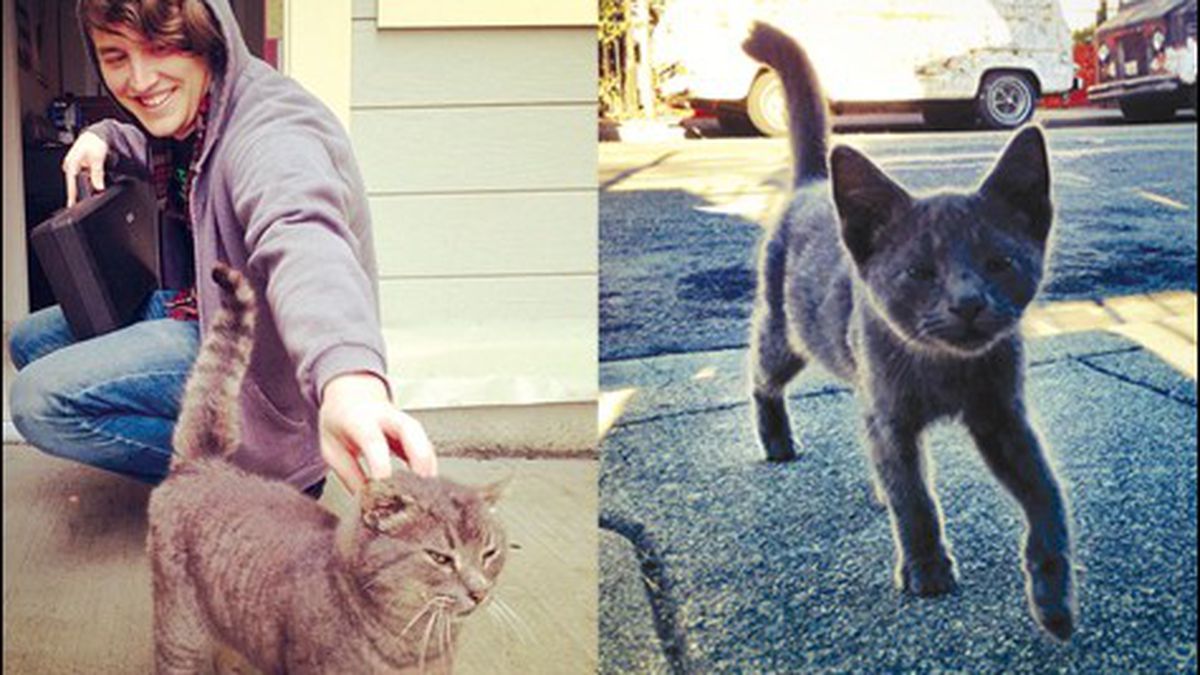 The Cat Man of West Oakland

Adam Myatt is known as one half of Oakland electro-pop duo James & Evander. But now he's also known for his love of cats.

Step inside Adam Myatt’s bottom-floor apartment in West Oakland, which he shares with two friends/collaborators, and you’ll find evidence of a typical musician’s bachelor pad: keyboards and equipment and recording gear. But upon closer look, you’ll also see the home of a cat lover: a door draft blocker made of cutout cats; a kitty-centric mouse pad; a cat calendar on the wall by the door. It’s not just Myatt’s apartment that has a feline presence; it’s also his neighborhood. Across the street from his duplex on a recent Sunday afternoon, a fluffy gray cat lazed in a sunny driveway, enticing a couple to pet it.

As it turns out, West Oakland has no shortage of cats — especially feral ones — and since he moved there a year and a half ago, Myatt has been actively documenting them. Having dubbed them “hoodcats,” Myatt posts photos of the scruffy felines on his Instagram account, catsontour (despite the name, most of the pics are of cats in his neighborhood), and on his corresponding Facebook account, hoodcatsoak. Like most things cat-related on the Internet, Myatt’s photos became an instant hit — he recently wrapped up a successful Kickstarter campaign to create a 2013 Hoodcat calendar, which completely sold out.

Any musician might resent the fact that simply taking photos of cats on one’s cell phone could potentially eclipse the popularity of one’s art. But Myatt doesn’t see it that way. “It’s just strange to have some notoriety, that people know my cat pictures,” said Myatt, who’s a bit scruffy himself, but in an endearing way. “That’s a weird thing. Sixteen-year-old me would not have ever expected that. ‘You’re gonna do what? And people are sorta gonna listen to your music?’ Yeah, well, but cat pictures influence that! It’s all meshed together, dude.” In fact, Myatt and his roommates, Glenn Jackson and Matt Tammariello, make music under the Hoodcats moniker, and plan to put out a release later this year.

A genuine cat lover, Myatt began taking photos of cats a couple years ago, just for fun. When his friend Ryan Wasterlain of the Dallas band Summer of Glaciers went on a West Coast tour and tagged his photos #catsontour, Myatt realized he’d stumbled upon a brilliant idea. So when Myatt’s own band, the electro-pop duo James & Evander, went on tour, he took photos of the cats he saw on the road, usually those belonging to the people he and Jackson (his bandmate/roommate) were staying with, and posted them on his Facebook page. When Jackson and Myatt moved into their current West Oakland digs (Tammariello came later), Myatt began taking photos of the neighborhood cats and christened them #hoodcats.

In November, he launched a Kickstarter campaign to fund a wall calendar featuring the best images he’d taken so far. To his surprise, he raised 160 percent of his $900 goal, topping out at nearly $1,500. All 100 copies of the $15 calendar quickly sold out, and an extra batch of 25 also went in no time. Myatt said he only made a couple hundred bucks on the project — his goal wasn’t to make money, per se — but because his rent is so cheap, it was enough to cover one month’s living expenses. “People love cats and there’s a niche market for everything,” he suggested.

Granted, this isn’t your everyday cat blog. First off, it’s not run by a middle-aged cat lady. “I have now become the crazy cat dude,” Myatt said, not entirely unapologetically. Indeed, there is something charming about a 26-year-old musician (he’s also a recording engineer at Oakland’s Sharkbite Studios) who has an unabashed love of cats. And then there’s the juxtaposition of the cats in the rough-and-tumble environs of West Oakland. These aren’t the impossibly precious felines driving the traffic of Cute Overload; many of them look scrawny, beat-up, and weary. There’s an abundance of kittens because the feral cats aren’t spayed or neutered, and, hence, all combinations of colors and fur types. Often, they’re hanging out in gangs, and if there’s anything cuter than one cat, it’s multiple cats.

In addition to satisfying the seemingly endless human craving for photos of cats, the project has also drawn Myatt’s attention to the plight of the hoodcats. He said it’s not uncommon for the cats to disappear. One time he noticed a super-friendly one that had tried to come into the house, but it went away for a while, and when it returned, it had a scar on its neck and was limping. “We don’t see Limpy anymore,” he lamented.

Another time, Myatt caught an adult male cat trying to mate with a bunch of kittens. “He was biting into its back, like keeping it in place. This is kinda rape. I was knocking on the window: ‘Hey! Stop that!’ They all looked over at me with their big eyes, like, ‘What just happened? Someone’s watching us!’ But then they didn’t run away so, I guess you guys are fine? It was really weird.” Myatt said he usually errs on the side of not intervening, but probably would if his roommate, Jackson, wasn’t allergic to cats.

In fact, Myatt hopes to foster a cat from Cat Town, an Oakland-based nonprofit foster agency that specializes in cats that, for various reasons, are least likely to be adopted. “I’m a sucker for cats in dire situations,” he said.

Even further down the line, Myatt hopes to start his own hoodcat shelter. He said the house across the street from his apartment is for sale, and he’s pondered the possibility of turning it into a sanctuary for the feral felines. “I just don’t know how realistic that kind of goal is,” he said.