.The Bay Area Gets Fracked

PG&E will soon receive natural gas from a drilling process that threatens the country's air and water. 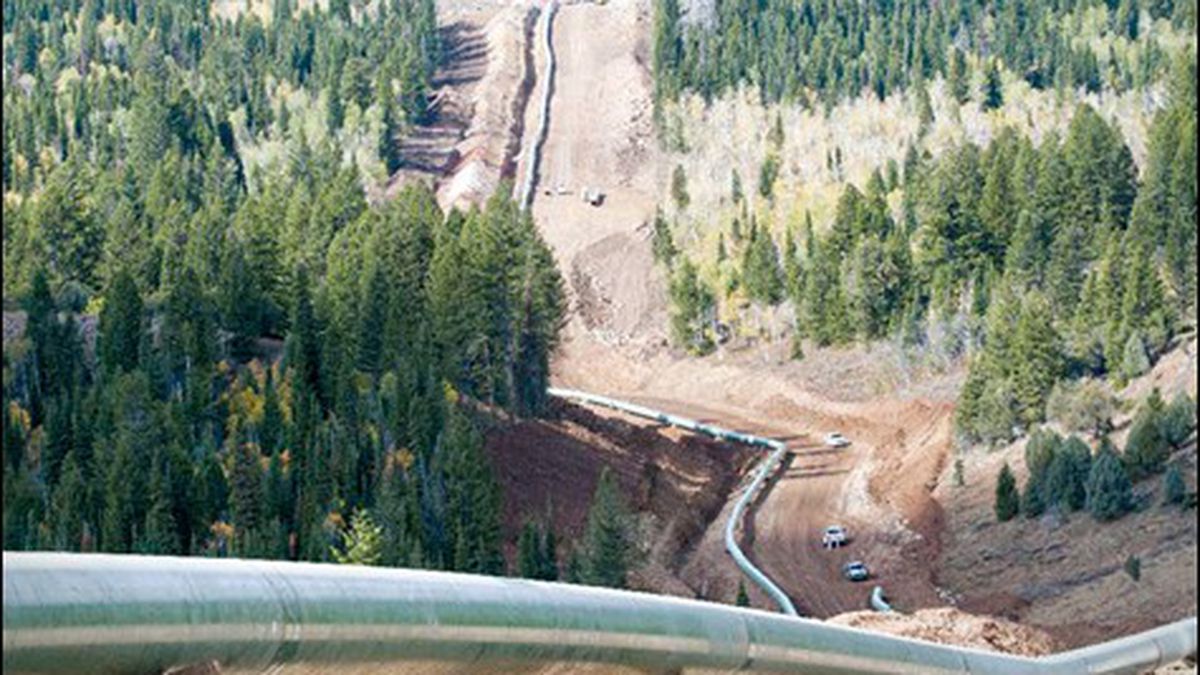 Hydraulic fracturing, better known as “fracking,” is quickly becoming one of the most serious threats to the environment nationwide. The controversial process involves shooting thousands of gallons of toxic chemicals and water at high speeds deep into the earth so as to fracture underground shale deposits and release otherwise impossible-to-get natural gas and oil. Fracking, in fact, is becoming so widespread, it’s spurring a natural gas boom in the United States. But, so far, it has garnered little attention in California because most fracking has taken place elsewhere. But the spotlight on it could soon shift.

PG&E is a partner in the massive, $3.5 billion Ruby Pipeline that will soon bring fracked natural gas to Northern California. Indeed, the Bay Area’s ravenous appetite for energy promises to intensify the use of fracking in the West, thereby deepening the potential destruction of pristine groundwater supplies used for drinking or that flow to streams and rivers. There’s also evidence that toxic pollutants from natural gas fracking production are poisoning the air and sickening residents.

Scheduled to open as soon as early as this month, the Ruby Pipeline is 680 miles long and will bring 1.5 billion cubic feet per day of natural gas from Wyoming and Colorado to southern Oregon, near the California border. PG&E then plans to send much of the natural gas throughout Northern California to feed power plants and for use in homes, businesses, and industry. Interviews and public documents show that most of the natural gas in the pipeline will have been produced from fracking.

In fact, 90 to 95 percent of natural gas now being pumped out of Wyoming and Colorado comes from wells that have been fracked, said Mike Freeman, staff attorney in the Denver offices of the environmental watchdog group Earthjustice. “The [underground shale] formations that industry is now accessing can’t be accessed economically without fracking,” Freeman explained, noting that getting the natural gas from traditional well-drilling would be cost prohibitive.

By contrast, hydraulic fracturing — fracking — provides natural gas companies with a cheap way to get at underground natural gas deposits that they would not otherwise be able to access. And for those who haven’t seen the deeply disturbing — and Academy Award-nominated — 2010 documentary Gasland, fracking presents numerous, potentially severe environmental problems.

How severe? The question is difficult to answer because of a lack of governmental monitoring. During the Bush administration, Vice President Dick Cheney and lobbyists for the natural gas industry convinced the then-Republican-controlled Congress to exempt hydraulic fracturing from federal environmental regulations and laws, including the Safe Drinking Water Act. The exemption is known as the “Halliburton Rule,” named for the oil and natural gas services company that Cheney used to run. As a result, there is little regulation of fracking; in many states, natural gas companies don’t even have to reveal which poisonous chemicals they’re shooting into the ground.

Wyoming has enacted tougher rules on fracking than most states, but they’re still relatively weak. For example, natural gas companies must disclose to state regulators what chemicals they use, but can demand that those disclosures never become public in order to protect “proprietary” information. Highly toxic chemicals that have been known to be used in fracking include kerosene, benzene, toluene, xylene, and formaldehyde.

But the dangers from fracking aren’t limited to what’s being shot into the earth. When trapped natural gas is released through the fracking process, the gas itself — methane — can pollute nearby underground aquifers, streams, rivers, and lakes. Numerous residents throughout the country whose drinking wells have been polluted by methane gas that was released through fracking have reported that they can literally light their tap water on fire because it contains so much gas. In Gasland, one homeowner puts a lighter next to water flowing from his kitchen tap, and it ignites into a fireball.

Plus, there’s the problem of “flow-back.” That’s the soup of polluted water that flows back to the surface after being shot into a fracked well. It can include the toxics used in fracking, along with released petroleum and naturally occurring radioactive material that would otherwise remain buried underground. Typically, natural gas companies divert the flow-back to open pits or ponds, where the toxins evaporate directly into the air.

Indeed, the whole modern process of natural gas production is potentially far more destructive to the environment than industry has portrayed it to be. In recent years, many politicians, energy companies, and utilities, including PG&E, have labeled natural gas as “clean-burning” energy. “But that premise only happens when you’re looking at burning it — not the whole production of it,” Freeman noted. “The production of natural gas has enormous impacts to wildlife and public health.”

Jennifer Krill, of the environmental group Earthworks, pointed out that a recent study from Cornell University concluded that when examining the entire process used to produce and burn natural gas, it’s actually worse than coal. Other studies have concluded that there is not much difference between the two. A recent Duke University study found high concentrations of methane in 68 drinking-water wells near shale-gas drilling and fracking sites.

In addition, a new study from the environmental group, Global Community Monitor, found 22 toxic chemicals, including four known carcinogens, in air sampled in Colorado and New Mexico near natural-gas production facilities. The chemicals, including benzene and acrylonitrile, were detected at ranges three to 3,000 times higher than what is considered safe by state and federal agencies. The polluted air also is making people ill. “One family from Garfield County [Colorado] had to flee their home after developing rashes and nose bleeds,” said Jessica Hendricks of Global Community Monitor. The family lived about a half-mile from six natural gas rigs.

So why does PG&E want fracked natural gas? Utility officials did not respond to phone calls for comment for this story. But it’s no secret that fracked natural gas is a cheap form of energy thanks in part to the lack of environmental regulations. It’s also no secret that PG&E is currently investing heavily in natural gas at a time when California regulations demand that it increase its use of solar and wind power. Utility officials have said they need natural gas power to offset the unreliability of solar and wind, which can be intermittent depending on whether the sun shines or the wind blows.

The Ruby Pipeline also could prove to be very profitable for PG&E. Texas-based El Paso Corporation is building the pipeline and is the majority partner, but PG&E has a stake in it. Moreover, six new natural gas power plants being built in Northern California, including four in the East Bay (including one in Hayward), will need plenty of fuel when they come online in the next few years. All of those plants will be supplying energy to PG&E.

There also are no regulations in California to limit the amount of fracked natural gas coming into the state. In fact, there are no regulations on fracking, period. California rules are so lax that no one, not even the state Division of Oil, Gas, and Thermal Resources, seems to know how much natural gas fracking is going on here currently, said Renee Sharp, director of the Oakland office of the Environmental Working Group. “That agency is supposed to be monitoring fracking, but it’s not,” she said.

The Environmental Working Group is sponsoring a bill being carried by Fremont Assemblyman Bob Wieckowski — AB591 — that would regulate fracking. The natural gas industry, at first, appeared to be amenable to the idea of regulations, but then “Halliburton arrived — that’s where the whole story changed,” Sharp said. Since Halliburton became involved in the state legislative process, the industry as a whole has become more resistant to regulations, she added. A version of the bill passed the assembly last month along party lines, with Democrats voting for it, and Republicans against. It’s now in the state senate.

Some environmental groups, meanwhile, have been disappointed in the Obama administration’s reaction to the rapid growth of fracking. In 2010, the US Environmental Protection Agency embarked on a two-year study of hydraulic fracturing and its impacts on the environment and human health. But then the president announced that another panel would also study fracking. Environmentalists are concerned that this second panel might undermine the EPA’s work, because Obama stacked it with oil and gas industry representatives. The president is said to support fracking because it presents a way for the country to depend less on foreign oil and natural gas. The chair of this new panel is John Deutch, a board member of Cheniere Energy, Inc., a Houston oil and gas company that paid him $882,000 from 2006 to 2009, according to Forbes magazine. Deutch also received $563,000 last decade from Schlumberger Limited, one of the three largest fracking companies in the world.

Many environmentalists in California also say that Wieckowski’s bill is urgently needed, because the natural gas industry and public utilities are showing increasing interest in a massive shale deposit in Monterey County that may store natural gas that could be released through fracking. Wieckowski’s bill would require natural gas producers to reveal what chemicals they use in fracking and the state oil and gas division would make sure they comply with state environmental laws. Flow-back ponds would be regulated by the California Water Quality Control Board.

However, the bill says nothing about the impending rapid growth of fracked natural gas arriving from out of state.