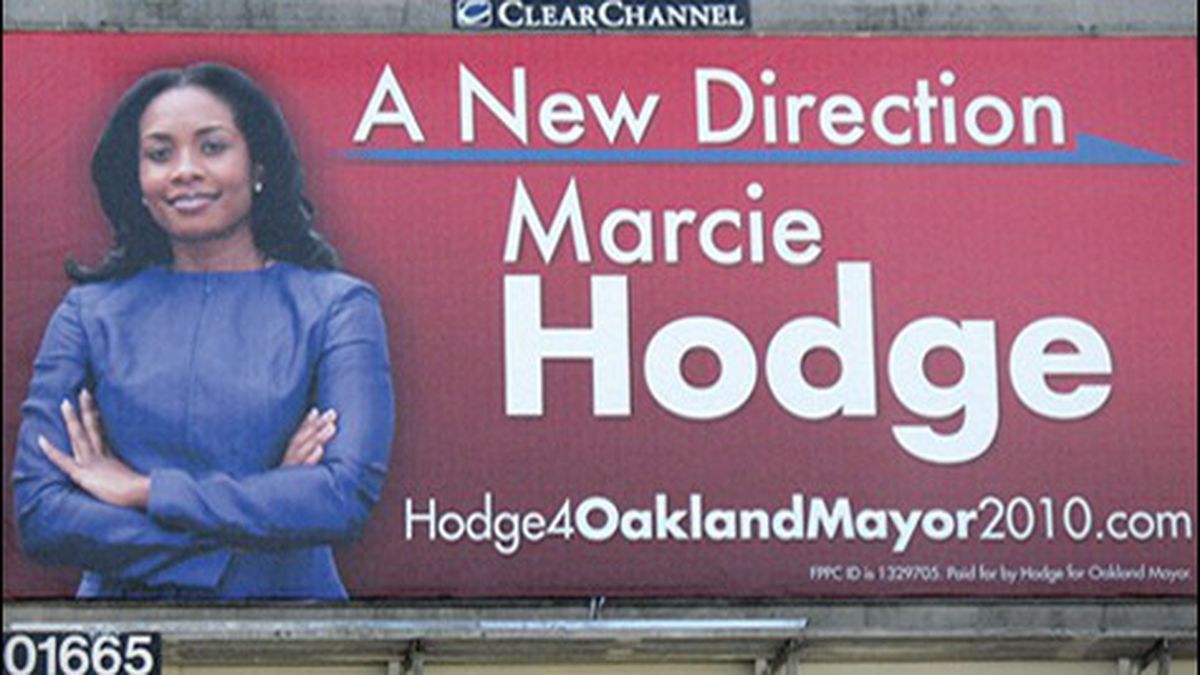 Former state senator Don Perata helped her run for Oakland City Council in 2006. Is her run for mayor in 2010 designed to return the favor?

When Marcie Hodge ran for Oakland City Council against Desley Brooks four years ago, it was no secret who was behind her campaign. Brooks and Don Perata had clashed often over the years, and the then-state senator’s close ally, Councilman Ignacio De La Fuente, made it clear at the time that he wanted Brooks out of office. So they found a candidate to take on Brooks — Marcie Hodge.

Some of the senator’s best donors helped bankroll Hodge’s campaign, and Perata’s current campaign manager, Larry Tramutola, managed her message. Hodge, however, turned out to be an ill-prepared candidate. Brooks trounced her by 17 points. “She was dumb as dirt,” Brooks said in a recent interview.

In 2008, when Hodge ran for reelection to the Peralta Community College District Board of Trustees, some of Perata’s contributors again opened their wallets for her. But this time, she faced an opponent, Marlon McWilson, who had a troubled past, and she won easily.

However, her tenure on the Peralta board has been plagued with scandal. She used the district’s credit card for personal expenses at a time when Peralta was facing financial insolvency, forcing her board colleagues to publicly admonish her.

So with that history, it was a surprise when Hodge entered the already-crowded Oakland mayor’s race in early August. Recent polls show she has virtually no chance of winning. And at last week’s big Chamber of Commerce debate, she completely flopped. Even she recognized how badly she was doing, telling the audience at one point: “You guys are scaring me; I’m stumbling up here.” It looked as if she didn’t want to be there, let alone be running for mayor.

Yet over the past two weeks, Hodge’s mayoral campaign appears to be suddenly swimming in cash. Her face adorns giant billboards in East, West, and North Oakland. She’s bought ads on Bay Area radio stations. And last week, she blanketed Oakland with a glossy, four-page mailer — an expense that typically ranges from $30,000 to $40,000.

So where did she get all that cash and why is she spending so much of it when she won’t take the time to prepare for a debate? In an interview, Hodge said she loaned her campaign money and has received donations from some of the same contributors she counted on in 2006. But it could be a long time before her assertions can be verified. According to Alameda County Registrar of Voters and Oakland City Clerk’s Office records, she has a history of not reporting her contributions until months after an election is over — in violation of state and local election laws. In both 2006 and 2008, she failed to file campaign statements until five months after the statutory deadline.

Records show she loaned herself $40,000 for her 2006 city council bid. But it’s not clear where she got the money — then or now. In August, she declared under penalty of perjury on her statement of economic interests with the City of Oakland that she has no job, no investments, and no other income that pays more than $500 per year. In an interview, Hodge said she has saved money from past jobs. She also said she runs a consulting business. But when asked why she didn’t report that business to the city, she replied, “I’ll have to look at that.”

Brooks and several other Oakland black leaders believe Perata, the king of big-money politics in Oakland, is once again helping his political protégé. “How would somebody who got her butt whupped by Desley Brooks and was censured by her Peralta colleagues suddenly have the money for billboards and radio ads?” asked Geoffrey Pete of the Oakland Black Caucus.

Hodge denied receiving Perata’s assistance, but Brooks, Pete, and others think the former senator is trying to use Hodge to siphon black votes from two of his main competitors — Councilwomen Jean Quan and Rebecca Kaplan. After all, Hodge is a black woman, and Quan and Kaplan have picked up some key African-American endorsements. Pete has endorsed Kaplan, as has the influential Black Women Organized for Political Action. And black Assemblyman Sandré Swanson is the co-chair of Quan’s campaign.

Hodge also seems to be mostly targeting black voters. Her radio ads have run on stations that are popular with black listeners, and her billboards are in predominantly black neighborhoods. So if her campaign is not about taking votes away from Kaplan and Quan, why would she target the black vote in a race when blacks make up about a third of the electorate and she will need support from throughout the city?

It’s a cliché, but in this year’s election, every vote counts. Recent polls show that Quan is running just a few points behind Perata while Kaplan is within striking distance in third place. Kaplan also appeared to win last week’s chamber debate, while Perata put on a startlingly poor performance. Longtime political science professor and TV news analyst Joe Tuman also did well in the debate. In short, Perata’s main competitors can ill afford to lose votes to a candidate who seems uninterested in actually winning the race.

Perata’s campaign manager Tramutola did not return a phone call seeking comment for this story. Hodge reported paying him $24,000 in 2006 to be her campaign manager. Records show that she also received maximum $600 contributions that year from longtime Perata donors Anthony Batarse, then a member of the Oakland Port Commission; Jon Reynolds of Reynolds and Brown, which is partnering on the massive Oak-to-Ninth housing development; John Protopappas, former port commissioner; Ana Chretien, owner of ABC Security; developer Ronald Dreisbach; and billboard developer John Foster. In 2008, Hodge’s biggest contributor was Perata donor B&B Auto, which owns the towing contract with the City of Oakland. It gave her $2,000.

Speaking of Perata, the ex-senator launched a round of TV ads two weeks ago that are raising questions as to whether he has violated the city’s campaign spending limit. As first reported by this newspaper, Perata was close to reaching Oakland’s $379,000 expenditure cap for mayoral campaigns before his ads went on cable television. Perata has been running ads during Monday night football games on ESPN.

Perata may have decided to go ahead and exceed the city’s cap because a Sacramento political group with close ties to him — Coalition for a Safer California — declared recently that it had gone over Oakland’s spending threshold for independent committees. The move could lift all spending caps in the mayor’s race, allowing Perata to spend whatever he wants to get elected. Perata campaign manager Tramutola also did not return a phone call seeking comment on this issue.

Last week, Quan and Kaplan asked their council colleagues to clarify Oakland law so that the Perata-linked group would have to prove to the Oakland Public Ethics Commission that it had gone over the cap. The councilwomen also want Coalition for a Safer California to declare under penalty of perjury that it has not coordinated with Perata. It’s illegal for a candidate to coordinate with an independent committee. Coalition for a Safer California is run by Perata’s longtime friend, Paul Kinney, and the group is funded by Perata’s primary employer, the California prison guard’s union.

Correction: An earlier version of this story mistakenly stated that Marcie Hodge ran in 2008 for an open seat on the Peralta Community College District Board of Trustees. She ran for reelection that year.

Digging in the Dirt

Oakland Cops to City: Piss Off