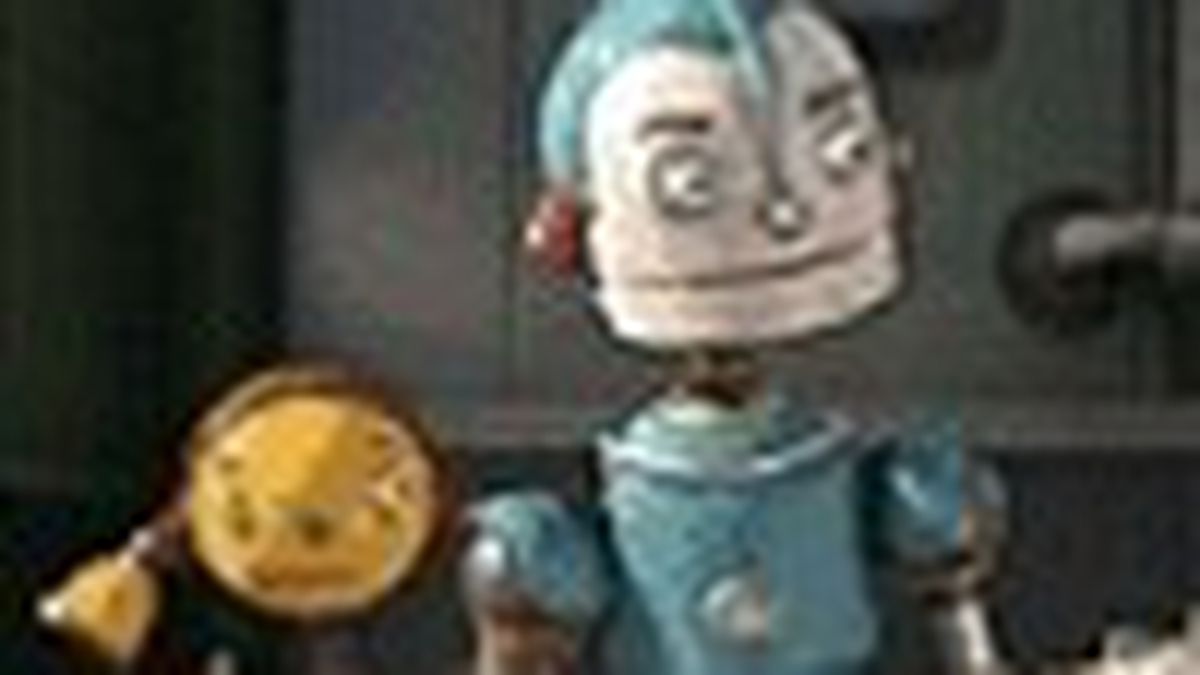 Like Big Fish for little kids, Robots works hard to please everyone.

“From the creators of Ice Age,” boasts the poster for Robots, which is no ringing endorsement. That 2002 animated feature, a sort of Three Mammals and a Baby in a prehistoric setting, looked and felt every bit as frigid as its snowbound scenery; it was impossible to warm to a movie that played like Pixar leftovers popped in the microwave by 20th Century Fox. But Ice Age now seems like a thing of the distant past — extinct, like Ray Romano’s woolly mammoth and the other animals lumbering through its kiddie-merch wasteland. Robots at last relaxes Pixar’s (and, to some extent, DreamWorks’) stranglehold on the computer-generated monopoly. If its story line isn’t exactly novel — a dreamer son sets off for the Big City to fulfill his destiny and make his poor parents proud — its look is hypnotically visionary. It appears to have been directed by Rube Goldberg, based on a story as old as, well, the woolly mammoth.

It’s basically a child-friendly remake of a 2003 inner-child fantasy: Tim Burton’s Big Fish, in which an American-accented Ewan McGregor escapes his rinky-dink, dead-end small town for a life of grand adventure. Though rooted in the “real world,” it was the stuff of magical-realist fairy-tale fables — a dreamy skittering through lands populated by kindly giants, glamorous witches, and storybook romances. McGregor retraces his steps, sort of, in Robots, voicing Rodney Copperbottom, a young idealist from rusty ol’ Rivet Town, who fantasizes about becoming an inventor and working in gleaming Robot City alongside its fabled architect Bigweld, a roly-poly behemoth with the voice of Mel Brooks. Robots is as picaresque as its flesh-and-blood predecessor — the story of a dreamer who bumps up against reality, in a beguilingly imaginative setting populated by wisecracking crackpots, lithe beauties, and villainous grotesques who lead the tin man down the yellow-brick road to heartwarming glory.

Like most animated movies aimed at selling dolls to gimme-gimme kids and tickets to their begrudging adults, Robots works overtime to entertain both demographics, stuffing its margins with more pop-culture references than an issue of Entertainment Weekly. (With its repeated mentions of “Britney Gears,” you realize how long it takes to make a movie like this, and with its two Star Wars references, you have to wonder if this isn’t really a Fox trailer for Episode III.) But unlike the Shrek movies, built on the shaky foundation of late-night comedians’ monologues, Robots doesn’t rely on being current, which will ultimately render it as timeless as any great fable. At its heart is a big, beating heart — a son who so loves his dad (Stanley Tucci’s dishwashing ‘bot held together with duct tape lest he fall to pieces) that he sets out to make something of himself by making spare parts for his pop.

But when Rodney gets to Robot City and Bigweld’s headquarters, secured by Paul Giamatti’s squeaky-mean Tim the Guard Gate, he discovers it has been taken over by the sleek-and-evil Ratchet, who has replaced Bigweld and his feel-good motto (“You can shine no matter what you’re made of”) with his greedy corporate slogan (“Why be you when you can be new?”). Ratchet, voiced by Greg Kinnear, has set out to stop the manufacturing of spare parts altogether. Instead, he wants to sell entire upgrades, expensive and shiny exteriors that would render the poorer robots “out-modes” and relegate them to the scrap heap. He’s an emasculated villain, though, merely doing the bidding of his mother, Madame Gasket (Jim Broadbent), a sort of junkyard devil presiding over the underground inferno known as the Chop Shop, where robots like Rodney’s dad are melted down. Theirs is a disturbing Oedipal relationship involving a tad too much fondling; she all but massages his shoulders and kisses him on the lips. At times, Robots resembles a nuts-and-bolts Manchurian Candidate.

If you were so tempted, you could even read Robots as a metaphor for the hostile treatment of the homeless — not a far stretch, considering one of the first things Rodney sees in Robot City is a beggar holding a sign reading “Got Screwed” — a blow softened by its accompanying sight gag of a screw jammed through the robot’s head. Indeed, Rodney’s only friends in the hostile new town are a band of trash-heap stragglers digging through garbage bins for spare parts that will keep them alive, if just barely. Among their ranks are Fender (Robin Williams, welcome for a change), Crank (Drew Carey), Piper (Amanda Bynes), and Lug (Harland Williams), who live in the ramshackle digs of the big-bootied Aunt Fanny (Jennifer Coolidge). Ratchet, the kind of soulless ‘bot who gets massaged while listening to Kenny G, regards them with contempt, and they live in constant fear of being swept up by one of Gasket’s streetcleaners and sent to, well, hell.

Which is not to say Robots takes itself too seriously; metaphors don’t sell dolls at Target, after all. It is, first and foremost, a beautiful blast, dizzying in its setups and thrilling in its executions, never more so than when Rodney and Fender take a trip on Robot City’s pinballing public-transportation system or when Halle Berry, as bad-girl-turned-good Cappy, reveals herself as a rollerballing robot. A certain nineteen-month-old sitting next to me during a Saturday-morning screening had just as good a time as I; he laughed at the sight of Fender and Rodney doing a ball-bearing ballet and smiled contentedly through the rest of the movie. Later, when he saw a Rodney doll at Target, he picked it up and said only “Buy it.” Sounds like they’re on to something with these animated movies after all.

Donut Savant Is Where It’s At