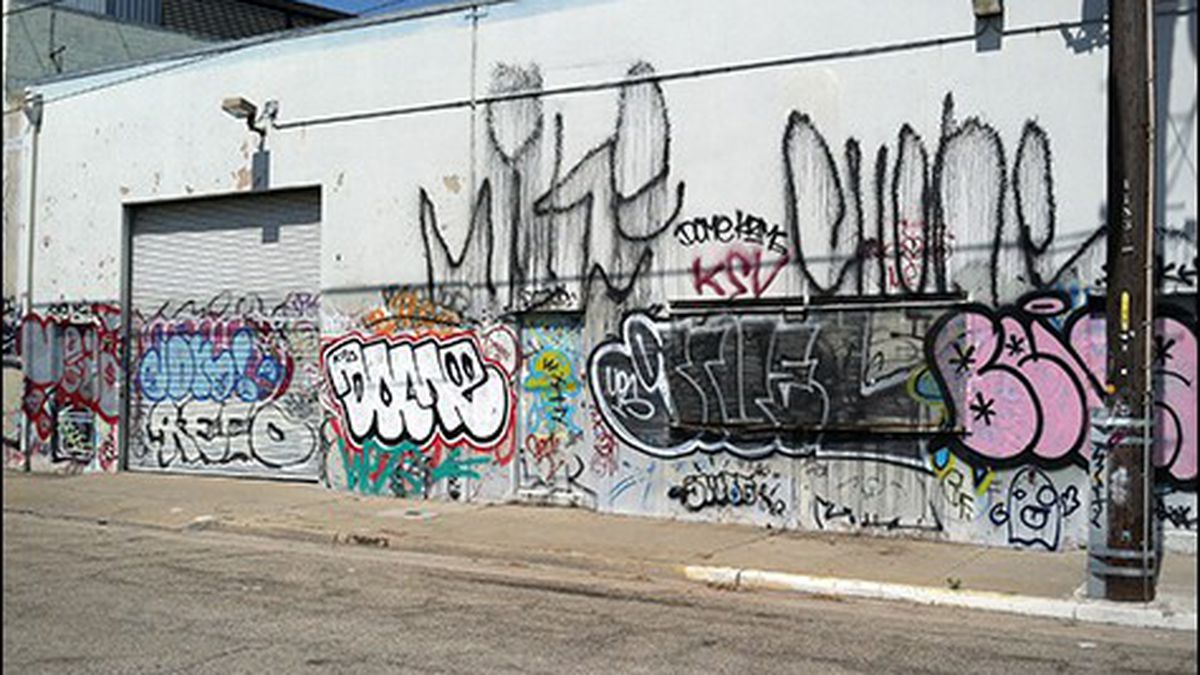 Taggers by Night, Muralists by Day

It’s a good thing Wayne McNeil’s customers don’t visit his manufacturing business in Oakland’s Fruitvale district. Otherwise, he said, he would have devoted a lot more resources over the last several years to covering up the endless graffiti on the facade of his building on E. 12th Street — a site that has become a prime target for tagging.

“Every inch was hit. It was just all over the place,” said McNeil. “As a business owner, I’m focused on running my business.”

Since the summer, however, his building has been painted gray and, for the most part, remained free of tags, thanks to volunteers that helped clean up the site and are now moving forward with what they say is a more permanent fix. The project — spearheaded by Keep Oakland Beautiful, a local nonprofit group, and Rock Paper Scissors Collective, an Oakland volunteer-run gallery and arts organization — offers a seemingly simple solution to an increasingly complex problem: Hire the so-called “vandals” to return to the scene of the crime and paint murals. As part of a successful Kickstarter campaign that ended last week, the groups raised more than $5,000 from about one hundred donors for the project titled “i do it 4 oakland.”

The effort resembles restorative justice initiatives aimed at diverting juvenile offenders away from the criminal justice system and engaging them in more productive ways than punitive fines and community service. But organizers said this endeavor is unprecedented in that it facilitates a direct collaboration between taggers and property owners impacted by their graffiti, and gives youth legitimate opportunities to make art. Six young graffiti artists are hammering out a design concept with input from McNeil; they’ll be paid around $100 each to design a mural for McNeil’s building — the first test site of the project — for the purposes of beautifying it and protecting it from future vandalism.

The project first came together when Keep Oakland Beautiful, a local chapter of the national nonprofit Keep America Beautiful, reached out to Kristi Holohan, youth, internships, and community director with Rock Paper Scissors Collective, earlier this year to help identify those who had tagged McNeil’s property to see if they might be interested in working on a mural with the property owner. Holohan said she was able to identify the taggers by their tags and by the fact that they had worked with Rock Paper Scissors before. She thought the idea was a good one. “Here’s an opportunity to get paid,” she said. “Let’s do something cool that we are all agreeing on. … And let’s allow them to actually artistically express themselves as opposed to having thirty seconds to write on a wall. The concept for the mural is to draw on some cultural iconography relevant to the artists, Holohan said.

The project comes as street art and murals continue to proliferate in the East Bay, sometimes sparking heated debates about the differences between art and vandalism, and murals and tags. At the same time, the City of Oakland has taken steps to tackle illegal graffiti, which officials say is a growing problem contributing to neighborhood blight. Last year, the city council passed an ordinance that increased penalties for taggers; they are now subject to administrative citations of up to $750 for a first offense and more for repeat offenders. City officials have emphasized that this ordinance applies only to “vandalism” and not to authorized murals or “graffiti-style art.” Last year, the city removed 4,602 tags, up from 3,713 in 2011, according to Oakland Public Works data.

However, Holohan believes there’s little distinction between vandalism and street art, especially considering how popular and mainstream Banksy-style contemporary works have become. Harsh punishments against youth taggers are hypocritical, she said. “In our society, we are supporting this on a consumer level, but on the other side we are criminalizing this?” Holohan said that two of the six young artists are currently facing a range of criminal charges, including vandalism (not related to McNeil’s building), and that she has written letters to the judges who are preparing to sentence them, noting their work with Rock Paper Scissors, in hopes of reducing their punishments.

In the meantime, the i do it 4 oakland project has come with its share of obstacles and has prompted questions about whether property owners will actually be willing to work with taggers. Holohan said it has been difficult at times to bring everyone together and reach a consensus, but that the back-and-forth process is in some ways more important than the final product. “Though it’s frustrating and challenging … that’s the most beautiful part,” she said.

The hope is that this will be the first of many collaborations at vandalized properties in Oakland, said Cynthia Elliott, a board member of Keep Oakland Beautiful, who is coordinating the project. Community groups will soon have access to more funds to produce similar murals in Oakland. The city council approved $400,000 in the 2013-2015 budget for a citywide mural program, and the city plans to issue a request for proposals early next year, said Samee Roberts, marketing manager for the City of Oakland. Projects will begin throughout the city next summer and continue through 2015, she said.

Elliott said that muralists and street artists have been frustrated by comments that they are forcing owners to allow them to paint on their buildings. A recent article in the Oakland Tribune titled “Extortion or art: Oakland grapples with graffiti” questioned whether street artists were unfairly pressuring building owners to commission them for mural jobs as a way to prevent graffiti. “This is not extortion where we come in and demand money to make a mural,” said Elliott. “We’re obviously raising funds ourselves and are committed to putting up an image that the building owner [supports].”

And the fact remains that these taggers are not likely to vandalize a wall with a mural on it, especially if it is their creation, she said. “These kids have to feel like they are in touch with whatever is up on the walls.”

McNeil said he is fairly open-minded about the mural concept but wants a design that is different from the standard graffiti — usually large bubble-letter tags — that has plagued his building for years. “If they got caught and want do a mural on my building, I don’t care. I don’t hold any grudges,” he said, noting that he agrees taggers will stay away once the mural is complete. “There’s definitely some kind of creative outlet that these people are needing.”

Councilmember Noel Gallo, who represents Fruitvale and leads regular graffiti cleanups, said he is well aware that stricter enforcement has its limitations — and that these kinds of innovative solutions can help. “For me to go and fine you and threaten you, we are talking about middle-school kids here. It doesn’t do any good.”