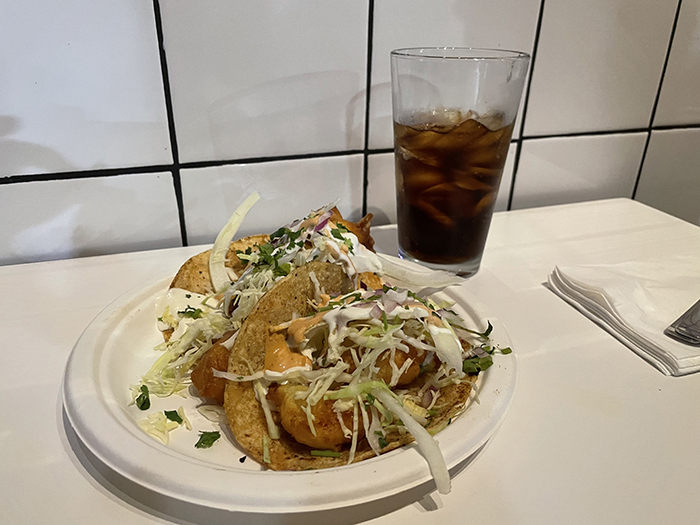 A taco truck has rolled into the neighborhood for good

Tacos El Último Baile has moved out of a four-wheeled food truck and into Nyum Bai’s former Fruitvale location on 12th Street. That’s the same 12th Street where drivers ignore the stop signs as they hurtle towards their next fender bender.

The menu is written on the window outside the entrance. If one has short-term memory problems, it’s also posted online, so bringing a phone along is helpful. I walked in and out at least two times trying to remember what I’d decided to order.

Owner Dominic Prado’s approach to tacos is unlike most taquerias. The customer chooses between three main categories, with each option featuring one of their handmade tortillas. The options are—tacos ($4 corn or $5 flour), vampiros ($5 corn or $6 flour with melted cheese) or lorenzas ($5 deep-fried tortilla with melted cheese).

Fish, shrimp and other specials show up as handwritten scrawls on the window. But the regular protein options are steak, pork, chicken, chorizo and veggies (including nopalitos, hibiscus and cauliflower). Without having tried El Último Baile before, I didn’t know, and wasn’t told by the cashier or the chef, that the tacos aren’t made with toppings. They arrive at the table naked, except for the grilled meat and cheese (for those who have chosen to add cheese).

I wasn’t quite sure what to do next before I spied a salsa bar, alone in the corner, without a sign to draw attention to itself. El Último Baile’s salsa bar is the key to finding satisfaction there. In a rare move, Prado includes a container with fresh guacamole—something I’ve never seen before at a taqueria. The chef must not be concerned about customers going all in for huge scoops of the delicious mixture of avocado, onion and tomato. What’s left of my conscience only permitted me to dab a small spoonful onto each one of my tacos.

The cart also holds containers of onions, quartered limes, cilantro, cabbage, sour cream and two kinds of salsa, red (spicy) and green (smoky). Beans aren’t in the cart and don’t appear anywhere else on the regular menu. They might belong in a burrito, but not on an El Último Baile taco.

El Último Baile’s transition from truck life to a brick and mortar one comes across as a literal translation. We stepped up to read the menu as if we’d arrived at a parked truck. Then once inside the dining room, it looked and felt like the dining area was a walled-in extension of the kitchen.

Prado has stripped any trace of Nyum Bai’s personality from his restaurant. Walking inside, the first things I noticed were the two large glass panels that face directly into the kitchen. Somehow they seemed to feature more prominently than before. I felt less like an observer and more like the observed. Because it was cold, we ate inside tucked in against the lone, windowless wall. Other diners kept their coats on. They sat outside at one of the many tables on the colorful, spacious patio.

Tacos El Último Baile maintains an active Instagram account. I’ve scrolled through many specials that come and go, such as jackfruit pastor tacos, whole fried fish imported from Ensenada, menudo and pozole (both red and green). When I visited, the special was a freshly made sweet corn dessert tamale that was light and airy. I also tried a shrimp taco and a fried fish taco. Beneath the crunchy breading, the fish couldn’t have been any fresher. I’d come back for that taco, and the plentiful supply of guacamole, again and again.

Next ArticleOh Sandwich, My Sandwich