Who knew Oakland’s Mistah F.A.B. would be the most charismatic performer in a town full of more than 1,700 of them during day two of SXSW? Three years after hyphy failed to detonate, sweat pouring from his face, stripped down to his white T-shirt, big gold “FAB” chain swinging from his neck, the veteran Yay Area all-star had all of Klub Krucial going stupid, going dumb, and getting quite hyphy Thursday night. Speaking in slang bordering on glossolalia, dancing as hard as the punk kids mosh, Mistah F.A.B. created an enthusiasm for life exploding from the 200 or so fans in the sparse two-story club that a Southern Baptist revival couldn’t compete with. East Coast, West Coast, the Midwest and the South had a de facto rap convention up in the Klub, with Philadelphia rapper Freeway jumping in on San Francisco’s The Jacka‘s set, and Berkeley’s The Pack networking like lil’ executives.

But it was Mistah F.A.B.’s deeply grateful, unifying set — which spanned Notorious BIG‘s “Juicy” to Mac Dre‘s “Thizzle Dance” — that owned the night. F.A.B. barely had to rap It was all a dream/I used to read word up magazine; the audience knew all the words. He could’ve just sat back and handled the transitions between the unapologetic covers. Instead, he went on to freestyle and worked the crowd up so hard he was literally cut off mid-song by the promoter. F.A.B. had the audience taunting “Kick me out” to the venue operators, as he cut into The Pack’s 1 a.m. set time. The four-man Berkeley show — still rocking some rather dusty pairs of “Vans” — mopped up after as best they could, but FAB had already put it all out there. The harder he went, the more the crowd gave it back to him — it’s an equation too many artists tend to ignore. 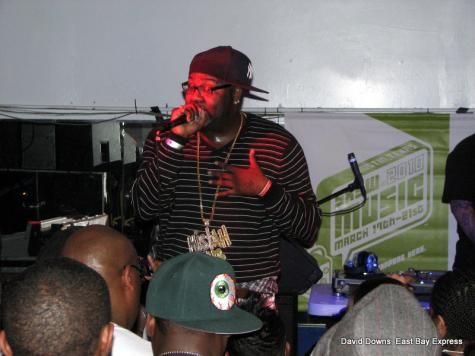