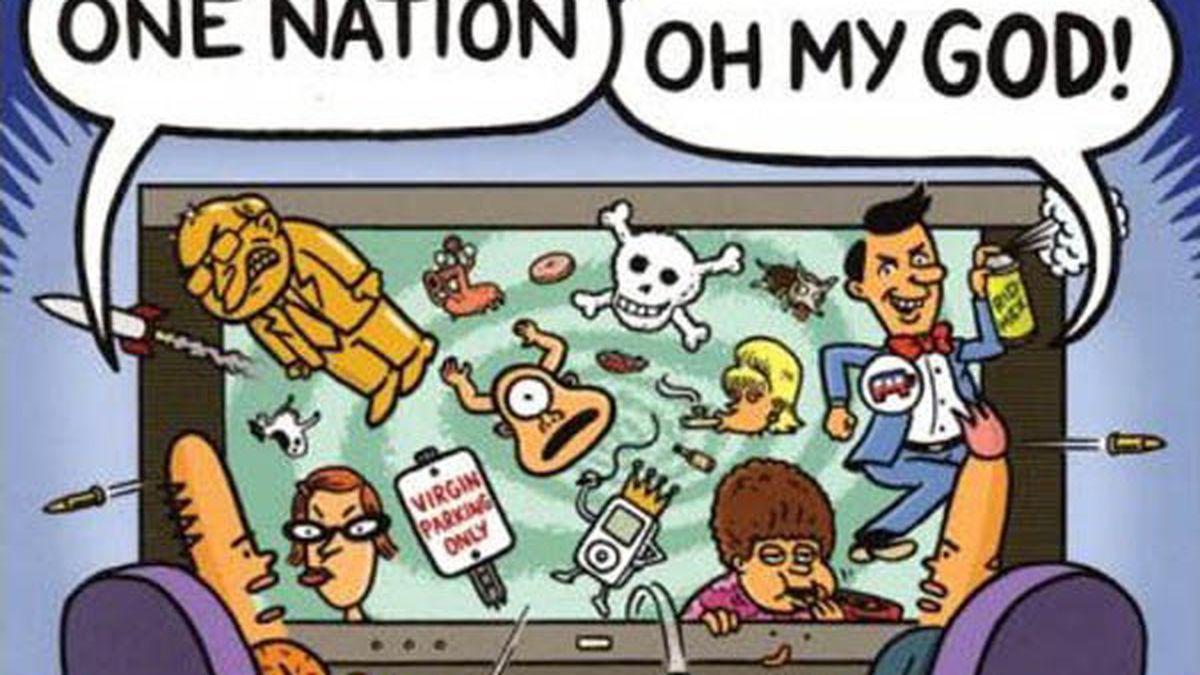 Slowpoke: One Nation, Oh My God!

In the foreword to her third collection, “Slowpoke” cartoonist Jen Sorensen argues that political comic strips retain their relevance even years after initial publication. As if to underscore her point, one of the first few strips in One Nation, Oh My God! indirectly references the Swift Boat scandal that surrounded John Kerry in 2004. Thanks to Sorensen’s new book, the strip was reprinted at the same time North Carolina Republicans launched a commercial exploiting Dem presidential candidate Barack Obama’s connection to controversial minister, Rev. Jeremiah Wright. The more things change …

While “Slowpoke” stands apart from other political cartoons because of Sorensen’s wit and creativity, One Nation, Oh My God! stands apart from other political cartoon collections because of one simple, yet ingenious invention: the comic strip commentary. Below every comic in this book, Sorensen has provided her own notes and reflections. Some illuminate the inspiration for a strip, others update the readers on the current whereabouts of various unsavory political characters, and more discuss initial reader reaction to the work. Many of them are quite funny in their own right. It’s a lot like director commentary tracks on DVDs, but with a lot less back-slapping and ego-stroking.

The strips in One Nation, Oh My God! go back to just before the 2004 election and run until the fairly recent past, up to the Clinton/Obama race. There are too many insightful, hilarious strips to discuss, but a couple stick out in particular. The rest of the world’s (and galaxy’s) reaction to Dubya’s 2004 victory should probably be reprinted again just prior to November’s election, so we can remember just how awful we all felt the morning after. The Rid-Mex/Gay-Ban comic offers a good refresher on how insidiously the GOP turns Americans against each other to cover how shamefully it has run this country. Sorensen’s nonpolitical, pop-culture strips are just as astute; “Aesthetic Movements to Come” has me actually hoping for the advent of Pointillist graffiti.

Furthering the DVD connection, the collection wraps with some bonus materials, including reprints of actual documentation explaining why one of the strips was banned from a Texas prison, and a list of search terms that brought people to her web site. One Internet user apparently found SlowpokeComics.com by asking, “How many pubic hairs does Janice have?” I assume the list is fabricated, but knowing Sorensen, it might not be. As evidenced by this book, she knows all too well how the best humor comes from the sad, screwed-up reality we live in. (IG Publishing, 160 pages, $13.95.)

After a Staff Implosion, a Vegan Restaurant Tries to Move Forward