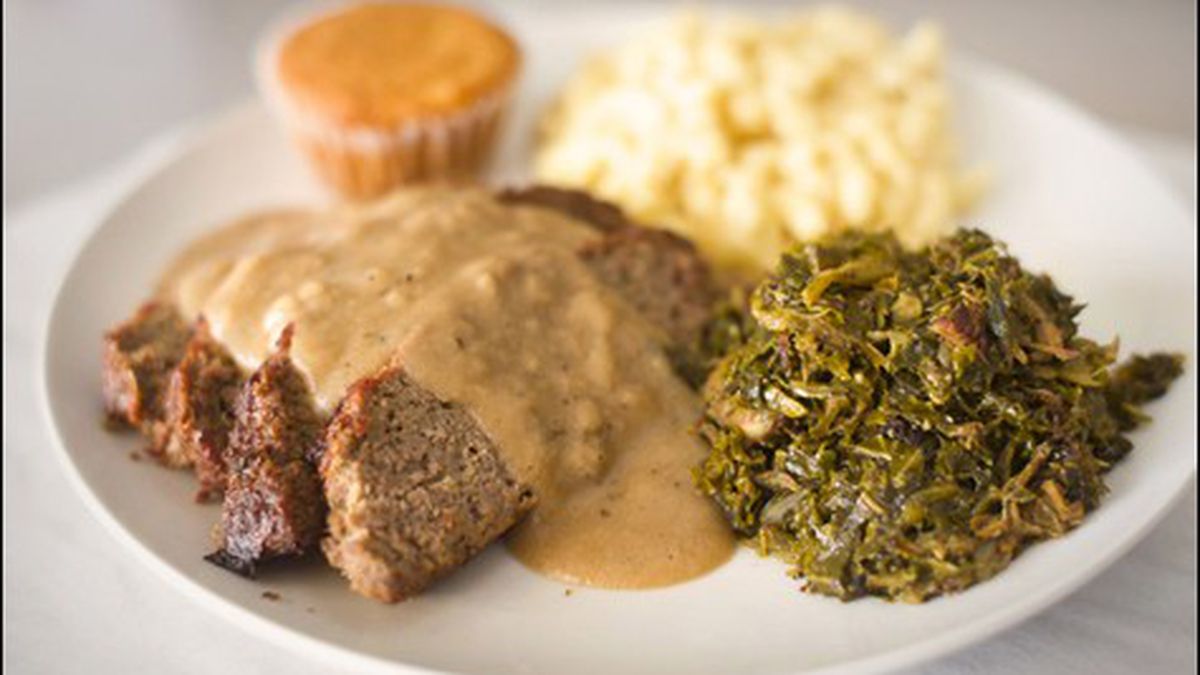 Slow Food for the People

Berlyn's Eatery offers a flawed vision of how the foodie movement might have turned out.

It’s easy to talk about the glories of local sourcing in a restaurant with a $200 prix fixe, over stinging-nettle cappelletti bathed in rabbit jus, with lovely drifts of farmhouse grana. Somewhat harder: locavore theorizing in a household with an income under the federal poverty line of $22,350, in a city where the Extra Value Meal costs $2.99.

Which is why, though there’s a fifty-fifty chance you’ll have a frustrating experience, you should go to the odd little Eastlake takeout place called Berlyn’s Eatery. In its own inexplicable way, Berlyn’s offers an alternate version of how the Slow Food movement might have looked, if only proponents had spent their resources reforming meatloaf instead of trying to convince us we should all be eating like 19th-century Tuscans.

Speaking of meatloaf: The one at Berlyn’s is really good, either at the heart of one of the soul food dinners, under a cream gravy with issues (more about that later), or sliced and fried for the Berlyn’s burger. Meatloaf expresses both the modest aspirations and unrealized potential of this sandwich and soul food place, opened in April by San Francisco chef Dontaye Ball and his brother-in-law, Larry McClendon, in the old Double D BBQ space in the first block of Oakland’s International Boulevard.

The name is that of McClendon’s late mother, though he turned it into an acronym of prevailing principle: Be Environmental friendly, Responsible, Local, Yummy, Natural, Sustainable.

Location is the first challenge for Berlyn’s, which consists of a takeout counter and three chairs for waiting. And unless you count the guys wheeling their paleta carts deeper into the San Antonio neighborhood, most of the scant pedestrian traffic consists of people walking to their cars after slurping a bowl at Pho Ao Sen on the next corner.

The second challenge: execution. The menu — which Ball pretty much drafted — lists a half-dozen sandwiches, Belgian waffles you can “pimp” with whipped cream or nuts, three soul food dinners, and jambalaya. Ball was in the kitchen during the takeout’s first month, but now he’s acting as consultant, and a supplier — through his company, Good Foods Catering — of cooked meats and a few other dishes.

“I wanted the menu to articulate a different flair for Oakland,” Ball said by phone. “Give it that San Francisco twist.” Some of the produce is organic, sourced farmers’ markets on both sides of the bay. And Ball buys hormone-free Iowa pork, Petaluma Poultry chicken, and ranch-verified Angus beef from Texas — no pasturing in West Marin, but no feedlot frankenmeats, either.

Ball is a compelling cook, someone who turned a résumé that reads like the foreword to a career at the head of a starred kitchen into a brow-raisingly solid CV for a self-employed caterer and popup chef. He went from the culinary arts program at City College of San Francisco to a two-year stint at Delfina, poked around France, returned to help open Pizzeria Delfina, cooked at Google, then returned to the city for Spork and Contigo.

Instead of picking up the chef’s clipboard somewhere, Ball started Good Foods. He smoked ribs and bacon in his backyard in the Bayview, and executed multicourse underground dinners in his home kitchen. He got noticed in the party-like frenzy of the 2009 Mission food-cart scene, mostly for his pulled pork sandwiches, which he sold at Cal men’s basketball games in Berkeley. These days he cooks out of a commercial kitchen in Hunters Point.

I remember tasting a shimmering spaghetti all’arrabiata that Ball served from a popup dinner in the city a year or so ago, and thought, “Why doesn’t this guy have a restaurant?” I found myself asking the question again recently, after tasting the mixed collards and mustard greens in my clamshell takeout box from Berlyn’s. They were the perfect fusion of Southern intention fleshed out with Delfina technique, a deep-tasting mass studded with browned bits of soft pork belly and pickled chiles, the bitterness of the greens moderated by a jus-like pool of reduced chicken stock and sherry.

Ball’s skills likewise infused the Jambalaya, with its sausage and house-smoked chicken, spreading through spicy, tomato-stained jasmine rice, a network of soft fibers. Why doesn’t this guy have a restaurant, one with waiters and a dessert list? Especially since the food here that Ball didn’t have any hand in making turned out to be the least successful.

That became clear with the meatloaf, which I liked — Ball grinds pork belly scraps to add to the beef, seasons it with caramelized onions, sherry. But the gravy spooned over the top — a sort of onion soubise, something made on-site at Berlyn’s — was a mistake. By the time I got home and opened the box, it had congealed into a curdled-looking mass that pointed to cornstarch as the culprit. That same gravy coated a couple of seared and baked chicken thighs for the smothered chicken, and sat like a clot on top of white rice, an optional side.

The breast in a grilled chicken sandwich hadn’t traveled well from the Good Foods kitchen — it was dry. And though I appreciated the effort behind the Kick Ass Tuna sandwich (Ball poaches fresh ahi in olive oil, then crumbles the flesh to resemble canned tuna before adding parsley, capers, and onion), somebody in the Berlyn’s kitchen had spread an unsettling amount of mayo on the whole-grain bread under it.

The first pulled pork sandwich I got was a mass of filaments bulked out with sauce, as if somebody tried to cobble together an order out of pan scrapings. The second time, it was the same pork I remembered Ball serving at a street-food event in the city: nicely chewy whorls of smoked meat blackened at the edges, with a judicious dab of Good Foods’ bacon barbecue sauce and squares of cabbage slaw.

The kind of intention and skill that yields house-cured bacon is the last thing you’d expect at a place like this, where sandwiches come with a bag of Flamin’ Hot Cheetos or Cool Ranch Doritos (your choice!), and Ball’s Urbanade, lemonade flavored with basil or strawberries that tastes eerily like Gatorade.