Sleep to Reunite This Fall

Famed San Jose stoner/doom band Sleep will reunite this fall to play a string of shows, according to High on Fire‘s publicist, Carl Schultz. The band, which was active from 1990 to 1998 and reunited last May for All Tomorrow’s Parties music festival in England, featured current High on Fire frontman/guitarist Matt Pike, bassist Al Cisneros (Om, Shrinebuilder, and Asbestosdeath), and drummer Chris Hakius (Asbestosdeath, Om, The Sabians).

The reunited band will play all of Holy Mountain at this year’s All Tomorrow’s Parties in New York on September 4, along with Sonic Youth, Iggy and the Stooges, Mudhoney, Sunn0))) and Boris, Tortoise, The Brian Jonestown Massacre, Fuck Buttons, locals Sleepy Sun, and more. No other dates for Sleep have been announced yet, but the band may play select dates in Chicago, LA, San Francisco, and Austin. More details as they become available. 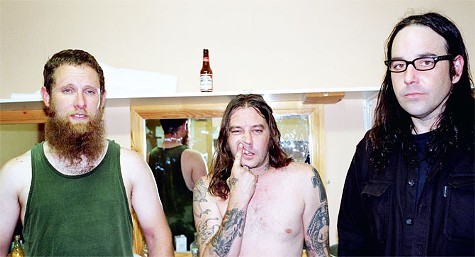