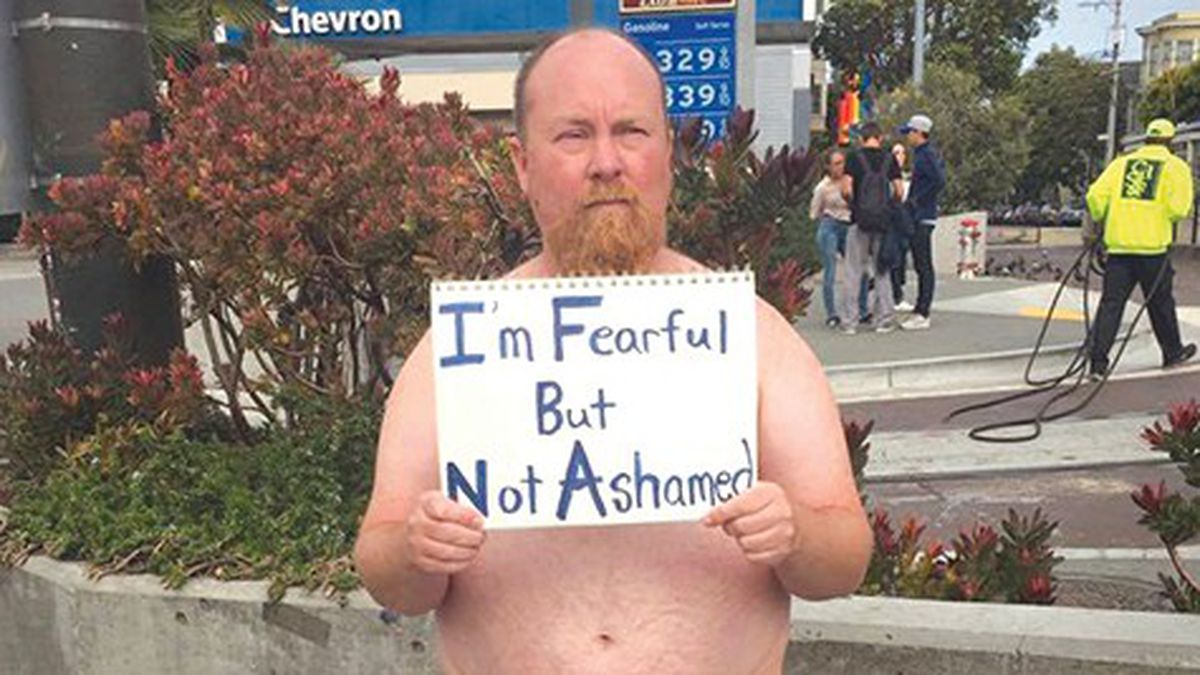 On August 21, Shane Brodie stood on a sidewalk in the San Francisco Castro district completely naked. The Berkeley resident, sculptor, and self-identified “fat trans man” is typically extremely shy. But that day, he was moved to bare all — accessorizing only with a large notebook. He flipped through its pages, displaying text for passersby to read: “I’m fearful but not ashamed. My manhood is my heart. My manhood is my courage. I love my fat body. I define who I am.”

Days before, a statue of Donald Trump in the nude had been standing in that exact spot. It sported Trump’s infamous hair-do, a large gut, no testicles, and a penis about the size of a thumb. A plaque at the base read: “The Emperor Has No Balls.”

Indecline, a collective of anonymous provocateurs that specialize in illegal public art, secretly installed five identical Trump statues in large cities across the country on August 18. Trump haters flocked to the statues to take photos for social media, in which many pointed mockingly at the presidential hopeful’s crotch. And reporters followed, flooding news channels with photos of the installations.

But Brodie didn’t find it funny.

“When I saw the reactions that people had to it, I started to feel despondent. Because I look a lot like that statue. My body is fat … I don’t have a scrotum, I don’t have testicles, I have a ‘micro-phallus’ — an enlarged clitoris,” he said. “It felt like a very big message going out to everyone and I felt it as well… And if it’s not countered in some way, then we condone it.”

Brodie said that he’s typically an extremely private person. Many of his friends that he’s known for a decade didn’t know that he was trans. He rarely even crosses the Bay into San Francisco because of social anxiety. “The only time I’ve ever done anything similar was in high school: I recited a Robert Frost poem and I cried all the way through it,” he said of the performance.

But the statue was triggering for Brodie, because it was an explicit reminder that society equates manhood with genitalia. In addition, he said it was severely disheartening that he saw people from the queer community — folks who he would normally assume were his allies — enjoying the joke as well.

That’s when Brodie came up with his plan. “I really love myself and I wanted to say what my actual manhood is about,” he said. “That it’s not a physical thing about myself.”

As Brodie began stripping his clothes on the street, he shook as tears streamed down his face, he said. He feared judgment, or worse — violence. But the general reaction was much more supportive than that. Many passersby engaged him in conversation, offering support. Older gay men walked by saying, “We’re so glad you’re here.” Other trans people voiced appreciation. A group of gay nudists paid a visit. One person even brought Brodie water and sunscreen.

Brodie stood there for three hours flipping the pages of his notebook. And, emboldened, he decided to go back the next day as well.

The second day was similar, except that time, the cops came, Brodie said. Police officers requested that he leave, citing that it’s against the law to expose your genitalia in public. But with a surge of confidence, Brodie stood his ground, pointing out that because he has no penis, none of his genitalia was actually visible. Brodie felt strongly about staying because he knew that the Trump statue had stood in that spot for an entire day before being removed.

Eventually, though, he gave in to the police’s demands and suited up. Still, his day had a storybook-esque ending. As he walked away, he met a photographer who focuses on social justice and had been quietly documenting his protest. The two decided to head to the Mission together for burritos. As they strolled through the neighborhood, where Brodie typically never goes, he happened to find a brand new SF Giants cap on the ground. “It was like my little gift from the universe,” he said.

On August 27, Brodie performed his naked protest for a third time. That time, sporting his new cap.

Since the first protest, Brodie has created Facebook and Twitter accounts and has been doing all he can to disseminate video footage and photos of his performance. In an email, he shared that he’s been overwhelmed and overjoyed at the flood of support he’s received online.

“I feel a lot better now. I feel really connected to the queer community,” he said. “I feel like it’s possible for me as the person I am to push back.”