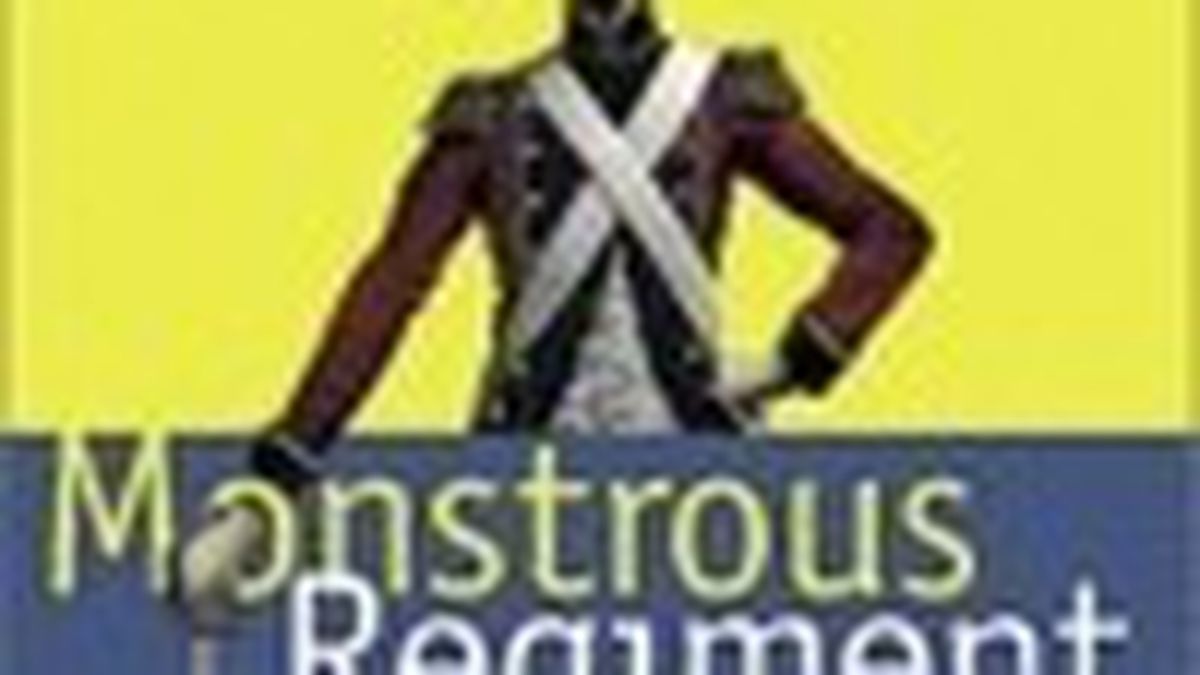 FIVE IN WHICH TOMORROW LOOKS WORSE THAN TODAY

Let’s face it: Real life’s a drag. It’s the 21st century and we still don’t have any rocket cars. But things could still be a lot worse — as revealed in these science fiction and fantasy novels, which prove that we really do live in the best of all possible worlds. Women aren’t allowed to join the military (or do much of anything) in the backwards fantasyland of Borogravia depicted in Terry Pratchett’s Monstrous Regiment (HarperCollins, $24.95), but one innkeeper’s daughter knows it’s the only way to find her lost brother at the front: Gender-bending comic mayhem hides kernels of astute social commentary. Harry Turtledove’s In the Presence of Mine Enemies (New American Library, $24.95) offers an alternate history in which Nazi Germany won WWII, as a Jewish man hides in plain sight as a bureaucrat in the globe-spanning Third Reich government in this chilling “What if …?” yarn. Death isn’t the setback it used to be when your personality can be downloaded by computer and inserted into a new body. In Richard Morgan’s cyberpunk thriller Altered Carbon (Del Rey, $13.95), a “dead man” hires an equally dead private investigator to track down his killers. But things get messy when death takes a holiday. Future Earth might be a paradise — but it won’t last. John Ringo’s There Will Be Dragons (Baen, $25) deftly mixes fantasy and sci-fi elements (elves fight alongside robots) in this tale of a high-tech Utopian civilization’s slide into barbarism and subsequent struggle to rebuild itself. The Fall of the Kings, by Ellen Kushner and Delia Sherman (Bantam, $13.95), presents a new kind of fantasy world: one without magic. Delicious intrigue abounds in this courtly, aristocratic world, where magic — that old fantasy staple — is long forgotten. Only one historian still believes that it once existed, a belief that brands him as a dangerous heretic. — Mike Rosen-Molina

The songs remain the same no matter how many times you hear them, but the deeply researched studies and tell-all autobiographies of classic rockers are multiplying faster than ever. And sometimes, they even tell us lots we didn’t already know. Got a Revolution!: The Turbulent Flight of Jefferson Airplane, by Jeff Tamarkin (Atria, $27), is a definitive bio of the Bay Area’s greatest rock band — one that, as this crossfire of feisty recollections reveals, was fueled as much by creative dissent as utopian harmony. Far more scholarly than Grace Slick’s recent autobiography, and a darn sight more entertaining. Clinton Heylin’s new Van Morrison biography, Can You Feel the Silence? (A Cappella, $28) makes you wonder how such a thoroughly unpleasant fellow can have built his career upon music that quests for the highest form of mystic, spiritual redemption. No author can answer that question, but a mine of perspectives on Van the Man packs this five-hundred-page tome, even if Heylin didn’t get firsthand interviews with his notoriously cranky subject. In Wouldn’t It Be Nice: Brian Wilson and the Making of the Beach Boys’ Pet Sounds (A Cappella, $15.95), Charles L. Granata didn’t get to interview his principal subject either, but he seems to have talked to most of the other important survivors involved in the making of the band’s landmark album, from other Beach Boys to Brian Wilson’s songwriting collaborator Tony Asher to unheralded session musicians. In the hefty and lavishly illustrated coffee-table style of The Beatles Anthology comes According to the Rolling Stones, by Mick Jagger, Keith Richards, Charlie Watts, and Ronnie Wood (Chronicle, $40). This story of the world’s most popular still-touring rock ‘n’ roll band, told in its members’ own words, includes some fascinating stories from the early days — particularly from the always-quotable Richards. Still, it can’t overcome the impression that much is being left unsaid, for which a better book by an ex-Stone not involved in According to… serves as a satisfying alternative: Rolling with the Stones, by Bill Wyman with Richard Havers (DK, $50) is even more lavishly illustrated, even bigger, and considerably franker, wisely concentrating on the group’s first and greatest decade. — Richie Unterberger

FIVE IN WHICH FICTION PLAYS FAST AND LOOSE WITH FACT

When flesh-and-blood famous people are turned into fictional characters, it saves readers the hassle of having to tackle books with footnotes. It saves novelists the hassle of having to invent people. Historians call it blasphemy, but it sells. Tobias Wolff’s Old School (Knopf, $12) employs a believable Robert Frost, a textbook Hemingway, and an appalling Ayn Rand as each is involved in visiting a boys’ school in the early 1960s: It’s a Dead Poets’ Society in which no one passes the sugar. British singer Morrissey proves elusive in Marc Spitz’ How Soon Is Never? (Three Rivers, $13) in which music journalist Joe Green, as jaded as he is debauched (in other words, not very), attempts to reunite the Smiths. The remaining musicians — guitarist Johnny Marr and the other two — appear in this light-hearted paean, which wears Hornby-rimmed glasses. The troubling relationship between Lewis Carroll (real name: Charles Dodgson) and young Alice Liddell is explored in Katie Roiphe’s ethereal Still She Haunts Me (Delta, $12.95). It chronicles an obsession with a muse that inspires as it undoes, revealing a man banished to his own demons. Cinematic demons and Wild West icons dot the American landscape circa summer 1976 in Arthur Winfield Knight’s Blue Skies Falling (Forge, $22.95) as director Sam Bonner (an obvious stand-in for Sam Peckinpah) travels with his dying young wife, Sara. This is no bloodbath maniac redressing his old ways, but a man who wants to believe in something as his lover slips into “the empty air of existence.” Vanished, too, in a way is actress Allegra Coleman in Martha Sherrill’s My Last Movie Star (Random House, $23.95). Reporter Clementine James is in the car with Coleman when it crashes and as James recuperates, she meets Clara Bow, Gloria Swanson, and other vintage screen sirens who offer up a cautionary tale or two. — Susan Compo

FIVE FOR PREACHING TO THE CHOIR

Most readers of political rants wish to have their beliefs not challenged but confirmed. As George Orwell’s 1984 protagonist says, ya just need “a good hate.” For lefties so inclined, there’s no shortage of inspiration this holiday season. In Lies and the Lying Liars Who Tell Them (Dutton, $24.95), Al Franken doesn’t take himself too seriously, so the book is merely a chuckle, but a good chuckle. Joe Conason, on the other hand, takes himself quite seriously in his deconstruction of reigning right-wing canards. Each chapter of Big Lies (St. Martin’s, $24.95) is devoted to, yep, a big lie. (For example: Tax-cutting Republicans are friends of the common man, while liberals are snobbish elitists who despise the work ethic.) Big Lies might assuage a recent defector from the GOP, but to anyone else it’s useful largely as a Republican malfeasance reference book. Lies also interest David Corn in The Lies of George W. Bush (Crown, $24). If for some reason you’ve forgotten why you can’t stand the current administration, Corn will remind you. In What Liberal Media? (Basic, $25), Eric Alterman labors under the delusion that Americans are as intimate with Beltway pundits as they are with the Jackass crew, but it’s chock-full of ammo for dinner-table crossfire with the conservative brother-in-law. No lefty strokefest would be complete without our favorite value-meal populist, Michael Moore. Among other questions in Dude, Where’s My Country? (Warner, $24.95), he pontificates on why, after 9/11, bin Laden family members were immediately ushered from the United States back home to Saudi Arabia without being questioned by the CIA. Like Franken, Moore is often quite funny, and capable of making the rich and powerful appear mentally deficient. But sadly, too many see Moore as presidential material rather than just a funny fat guy. — John Dicker

Is it because most of us live by the law that we so love to read about people who don’t? Fictional police and thieves are fine, but those titillating chills go even deeper when the crimes we read about are real — especially when the bad guys are more admirable than the good guys. This Here’s a Stick-Up (Alpha, $16.95), by Duane Swierczynski, is a well-researched encyclopedia of that most American of all crimes, bank robbery, starting with the very first US bank heist in 1798. Lesser-known masterminds such as Wilbur Underhill, George Leonidas Leslie, and Eddie Bentz are included along with the usual and much more famous suspects. In No Backup (Carroll & Graf, $25) former FBI agent Rosemary Dew (with Pat Pape) exposes the G-men as a bunch of sexist, racist, and computer-illiterate good ol’ boys. Piracy on the high seas is alive and well as revealed in John S. Burnett’s chilling Dangerous Waters (Plume, $14), which recounts deadly attacks on modern-day vessels from yachts to supertankers — and these buccaneers don’t look like Johnny Depp. W.C. Fields once said, “You can’t cheat an honest man,” yet Midwestern farmboy-turned-con man Oscar Hartzell did just that in the 1930s, many times over. Promising thousands of Americans that they were heirs to a portion of Sir Francis Drake’s fortune, Hartzell scammed millions in “retainer fees,” promising that he would untangle the red tape tying up legal rights to the estate. In Drake’s Fortune (Anchor, $13), ex-criminal Richard Rayner celebrates a devious charmer whose victims couldn’t help liking him even after discovering they’d been duped. For a year, reporter Gary Delsohn was a fly on the wall in the rough-and-tumble Sacramento County DA’s office. The result — The Prosecutors (Dutton, $24.95) — is an eye-opening read and a perfect gift for a law student. — David L. Kulczyk

FIVE ABOUT LIT AND THE WRITING WRITERS WHO WRITE IT

Anyone who loves to read great books can’t help but wonder how they got that way, and five published this year offer insights and clues. Because they’re incarcerated, they’re juveniles, and they’re amateurs, the teenage prisoners to whom Mark Salzman taught writing — as he recounts in True Notebooks (Knopf, $24) — are triply at risk of dooming his enterprise to intolerability. Though he despises writing workshops, Salzman led this one anyway: “If my college students had made this kind of effort,” he writes, “I might still be teaching.” That lament lingers over the emphatically superlative Best New American Voices 2004: The Best New Fiction from America’s Top Writing Programs (Harcourt, $14). Toss any suspicions that these seventeen stories — by writers who collect fellowships the way Salzman’s inmate- students collect tattoos — will be cookie-cut, anemic, and false. The title of Jeffrey Meyers’ Privileged Moments: Encounters with Writers (University of Wisconsin, $16.95) might smack of sycophancy, but it’s hardly the Inside the Actors’ Studio of writing books. The Berkeley author builds a relaxed, illuminating rapport with each of his eight subjects, among them V.S. Naipaul, Arthur Miller, and Iris Murdoch. The trickiness with Bill Morgan’s The Beat Generation of San Francisco: A Literary Tour (City Lights, $17.95) is that gawking around North Beach with this guidebook sticking out of your pocket will brand you as a square, let alone a latecomer. No matter: It’s just what it promises to be, packed with curiosities and easy to read nonlinearly. (The Beat purview, as Morgan reaffirms, includes the East Bay, from the Albany racetrack to Ginsberg’s Berkeley cottage.) If all of this flitty-litty tourism makes you wanna Buk, try The Hunchback of East Hollywood (Headpress, $16.95), Aubrey Malone’s fairly febrile biography of Charles Bukowski, “a man who never knew what he wanted to say but kept on saying it anyway” — and who still puts the modern literary life in sharp perspective. — Jonathan Kiefer

Monday’s Briefing: Hundreds Show Up to Lake Merritt for “BBQing While...

How To Grow Organic Pot