Europe on 500 casualties a day. 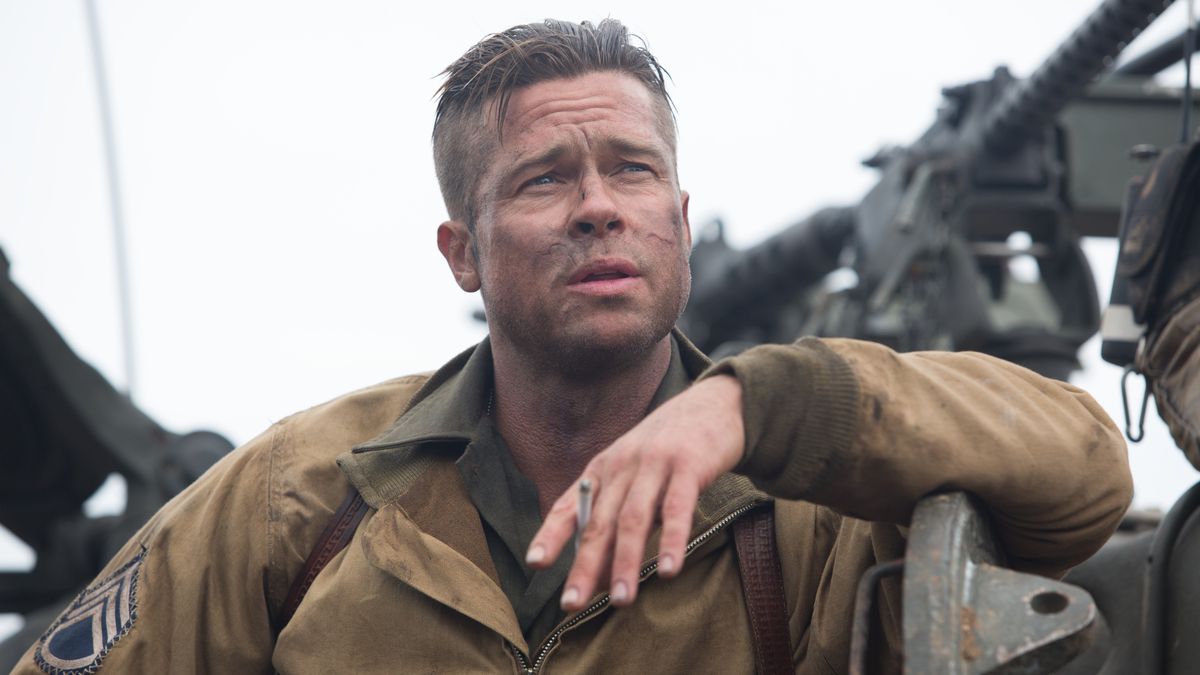 Brad Pitt takes Europe away from the Nazis again in David Ayers’ Fury. Pitt’s first time was in Quentin Tarantino’s manic World War II adventure Inglourious Basterds, in which his character, Lt. Aldo Raine, scalps German soldiers and carves a swastika into the forehead of one of his own men, on his way to assassinate Adolf Hitler in a movie theater. Fury, also set during WWII, plays things slightly more realistically. Pitt’s Sgt. Don “Wardaddy” Collier — not quite a maniac but getting there — commands a US Army tank crew tasked with destroying holdout enemy resistance inside Germany in the last days of the war. No scalping, just plenty of shooting, knifing, blood, and grime.

Wardaddy is a tough veteran with scars all over his body — as in many of his movies, Pitt takes the opportunity to display his physique — whose comrades-in-arms resemble the usual bunch of misfits seen in most Hollywood WWII movies since The Dirty Dozen. (It would be astonishing to see a platoon of well-adjusted soldiers.) In fact, much of Fury fits into the “usual” category, somewhere south of Basterds, Saving Private Ryan, TV’s Band of Brothers, the Russian-made Stalingrad, etc. We should award credit points to writer-director Ayers, a maker of brisk police actioners such as End of Watch, for even trying to step in and do something new in a subgenre that’s been around for seventy years. But despite its flurry of fire, Fury comes across as an also-ran, essentially because for 2014, it’s just not crazy enough.

However, there are things to admire in filmmaker Ayers’ tour of the European theater of war. Pitt, now a mature fifty years old, is believably rugged, presiding wisely over a group of guys bickering inside a can. His Wardaddy is not that much different than his stoic Achilles at the gates of Troy. We cannot detect much “acting” — that’s a relief. The second-happiest casting choice in the film is Shia LaBeouf, now fully grown after wrestling with Nymphomaniac. LaBeouf’s mustachioed god-squadder named “Bible,” who is forever quoting scripture, holds down the grizzled veteran role, anchoring a wildly gesticulating cast of hams, including Ayers regular Michael Peña as “Gordo” the requisite Latino, Jon Bernthal portraying an uncouth hillbilly type nicknamed “Coon-Ass,” and Logan Lerman, a long way from The Perks of Being a Wallflower as the similarly stereotyped green, scared kid, army-clerk-turned-tank-gunner Norman Ellison. Yes, these characters seem borrowed from Private Ryan and numerous other movies, but Ayers populates his police thrillers the same way, so at least he’s consistent.

The Germans they meet tend toward the less clichéd. In a ruined town, Wardaddy’s men discover a roomful of upper-class Nazis, slumped in death over brandy bottles and rich food, a mass suicide. The tank crew captures one or two enemy soldiers, with the understanding that they are to kill all SS immediately and without mercy. Then there are the two frightened deutsche Mädchen sisters Wardaddy and Norman make friends with (“We can kill ‘em but we can’t fuck ‘em”) over dinner in their trashed apartment.

But generally the Yankee tankers just move doggedly forward, trying to stay alive against increasingly desperate defenders. The combat scenes are loud, busy, and visceral. Evidently the fashion of war movies today requires all weapons fire to use tracer rounds. It looks great, but in reality their machine-gun barrels would have melted down back on the beach in Normandy. Ayers doesn’t demonstrate much directorial personality, aside from the annoying background choral chants that spring up periodically — the spaghetti western-style opening with the horse is a prime example. It’s the sort of war movie in which a soldier gets hit, the gunfire sounds stop, and the actors all look at each other while the string music slowly comes up. Makes us wish we were back with the LAPD.

Next ArticleMar-tea-ni, anyone? Asha Adds Alcoholic Tea to Its Menu