Review: Eyehategod at the Oakland Metro, 1/24

Demon-conjuring screeches? Check. Legendary New Orleans sludge? Check. Lost platform clog in the mosh pit? Check. Not one, not two, but six doom metal bands stopped by the Oakland Metro Operahouse this past Friday. It was a celebration of Eyehategod’s 25th anniversary and Graves at Sea’s triumphant return to the stage after a long hiatus. 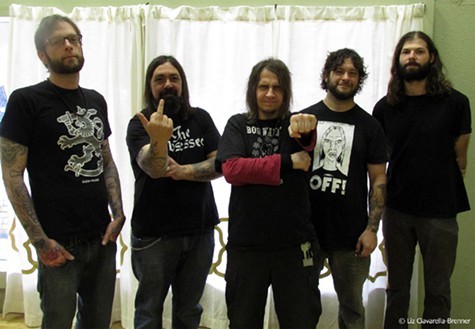 Lidtoker, Stoneburner, Swampwitch, and Augurs opened. Oakland’s own rising favorites Lycus unexpectedly dropped off the bill the day of the show due to “unforeseen circumstances.”

Luckily, openers Lidtoker and Stoneburner were standout. With Stoneburner’s killer Sabbath guitar riffs and Lidtoker’s relentless, galloping drumming, they transcended the stereotype that all stoner metal bands sound the same.

Stoneburner gave multiple shout-outs to Oakland, the sister metal city to its hometown of Portland. The band alternated between surprisingly accessible, almost poppy songs to slow instrumental dirges à la stoner metal icons Sleep. A highlight of its set was witnessing drummer Jesse McKinnon, who resembles a Nordic god with his long blonde hair and shirtless tattooed chest, bellow into the microphone “You made it burn!” as he simultaneously struck the cymbals and looked into the audience with maniacal eyes.

Lidtoker stood out from the other bands in the lineup by being the only drums/guitar duo. But what it lacked in members it more than made up for with volume and crushing power. It’s a relief to see a doom/stoner metal band break out of the mold; Lidtoker wasn’t afraid to experiment with reverb-drenched vocals and an almost jazz-like tendency to unexpectedly switch up its rhythms.

Graves at Sea came on next and stole the show. This was largely due to lead singer Nathan Misterek’s eerie banshee vocals and charismatic presence. With his long stringy hair in his face, he writhed onstage and got down low to get close to the audience. He never made banter about beer or touring; he only gave us his blackened, high-pitched singing, which is reminiscent of Burning Witch-era Stephen O’Malley. Since the chance of Burning Witch reuniting is slim to none, watching Graves at Sea perform was second best.

Misterek seemed to be trying to summon a demon and evoke witchcraft, and everyone was thrilled. The whole crowd was doing its best metal dancing, which involved a lot of hitting into each other, swinging dreadlocks, and squeezing invisible oranges.

In between songs, Misterek whispered incantations into the microphone, looking sinisterly cinematic in front of velvet curtains. If a passerby had stuck his head into the door, he might have deemed the sounds coming from the stage as grim and misanthropic. If he looked more closely though, he would have seen gleeful expressions on people’s faces. And as dark, distorted, and plodding as the music and vocals of “Pariah” sounded, the lyrics offered a surprisingly feminine counterpoint: to bleed without/pain or wound/in harmony/with tide and moon/invoke the power of fertility/cyclical/from womb to tomb.

With influences as diverse as Lynyrd Skynyrd and Celtic Frost, headliner Eyehategod brought its unique brand of self-proclaimed “Down to Earth Motherfucken Post Amplification Blues” — in other words, the genre it helped to create: pure unadulterated sludge metal from New Orleans.

By the time the band started playing, people seemed a little burned out from head-banging through five bands already. Moshing waxed and waned, but picked up near the end of the show. Eyehategod didn’t fail to deliver a wall of sound so thick that those not wearing earplugs likely went home with hearing damage. The doom-laden riffs, courtesy of guitarist Jimmy Bower, were heavy but predictable and somewhat repetitive.

It didn’t help that lead singer Mike IX Williams had to compete with his band. Even when he was full-on screaming, his lyrics were drowned out. Regardless, the experience of seeing Williams in head-to-toe camouflage and a rosary around his neck, singing about an anxiety hangover accompanied by a feedback wall of evil sounds, was a memorable one. The fact that my shoe flew off my foot midway through the show was a good indicator that the night was a success.