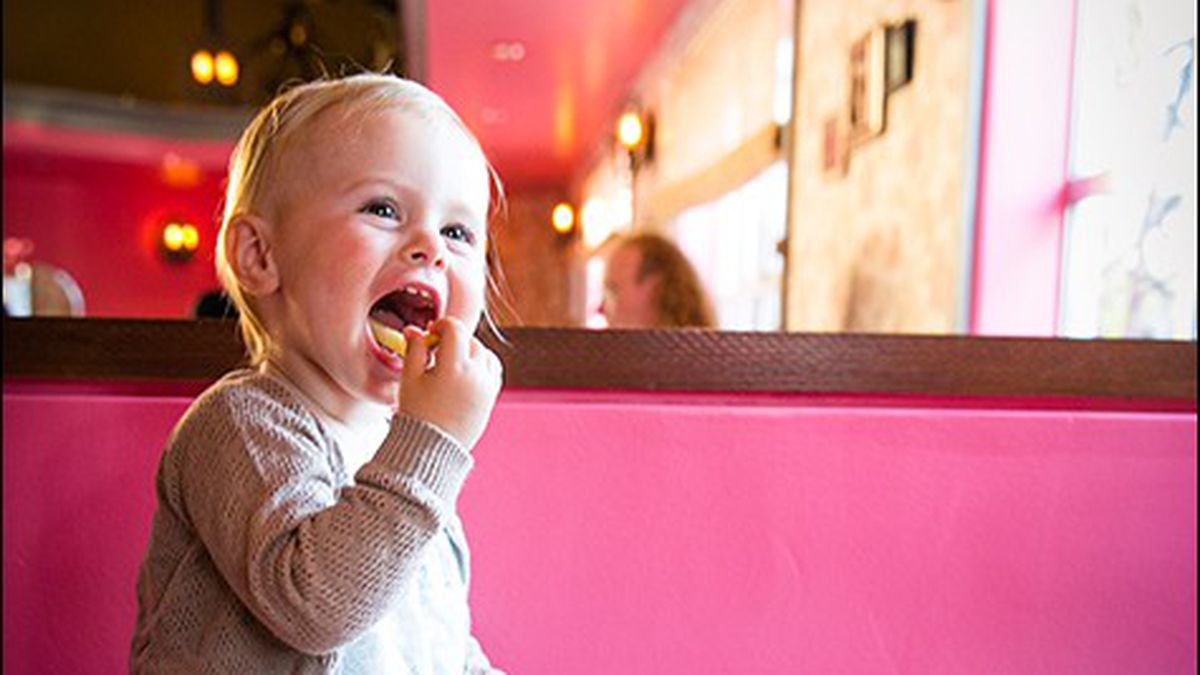 Here are five East Bay restaurants with great kids' menus that will please children and grownups.

I hope you’ll excuse this father’s humblebrag, but my two-year-old daughter’s claim to fame is that she’s a good eater.

While other kids her age were still being spoon-fed Gerber, she took a liking to kimchi. If I weren’t worried about blowing the critic-in-training’s cover, I’d show you pictures of her sucking on a marrow bone or presiding over a spread of banchan like a self-satisfied, conquering queen.

What my daughter hasn’t had much use for, though, are kids’ menus. After all, most restaurants offer some variation of the same old thing: a grilled chicken breast, a hot dog, a bowl of plain noodles. She’ll eat that stuff, but why bother when she can steal bites off of mom and dad’s (far tastier) plates?

Look, I realize that a Good Eater is the rarest of creatures in toddlerdom. And despite everything I’ve said thus far, most of the time when my wife and I take our daughter out to dinner, we’re just trying to get through the meal without a meltdown. Foodwise, familiar and inoffensive seem like a good way to go.

But seen in another light, generic kids’ menus are missed opportunities. Plenty of parents would love for their kids to become more adventurous eaters, and one would hope that eating out would help, rather than hinder, that process. As Anja Voth, the chef at Gaumenkitzel (2121 San Pablo Ave., Berkeley, 510-647-5016) put it, children “are humankind like we are; they are just little. I think we underestimate them.”

Fortunately, a handful of East Bay dining establishments offer kids’ menus that buck the trend by serving fun, tasty food that’s accessible to little ones but not dumbed-down. To the parents of picky eaters, I offer no guarantees, but put it this way: These restaurants do a good job of putting your child in a situation where he or she might — just might — try something new, and like it.

Voth’s West Berkeley restaurant is a good place to start. With its bright, sunny dining room and low-key vibe, Gaumenkitzel is one of the most unexpectedly kid-friendly restaurants in the East Bay. The kinder menu is packed with surprising options: rosemary and cannellini bean soup topped with shaved Parmigiano-Reggiano, beef goulash (marked for “big kids”), and potato salad served with knackwurst wieners.

Voth said she did some market research, surveying mothers at a local German-American school about what dishes they remembered feeding their kids back in Germany. Mostly, though, Voth uses the same high-quality, mostly organic ingredients that are in the adult meals but presents the food in a more playful way: A fried egg pops out of a mountain of mashed potatoes like a sun, bacon is arranged like the crossbones on a pirate’s flag.

During my daughter’s most recent visit, she opted for the “fine wiener” and spätzel, a dish that will appeal to any kid who likes mac ‘n’ cheese — except instead of macaroni, Voth uses handmade spätzel that’s coated with a little bit of melted cheddar. Instead of the hot dogs a thrifty home cook might toss into the pot, Voth uses slices of knackwurst — a springier, less-salty sausage. On the side, for dipping, a ceramic soupspoon comes full of homemade ketchup.

My daughter gave the dish her highest praise: She cleaned her plate.

In some cases a kids’ menu seems generic but yields unexpected pleasures. Such is the case at Saul’s Restaurant & Delicatessen (1475 Shattuck Ave., Berkeley, 510-848-3354). Most of the options are standard — a peanut-butter-and-jelly sandwich, a cup of fruit salad — but you’ll also find more interesting items: matzoh ball soup (barely a stretch if your child likes regular chicken soup) and falafel salad (served on pita so that kids can eat it like a wrap).

The most pleasant surprise was the “Chicken of the Day,” which our server described as a grilled chicken breast coated in “completely innocuous” (i.e., non-spicy) Middle Eastern spices. I braced myself for something dry and bland; instead, the chicken cutlet was fairly juicy and flavor-packed, seasoned like the kebab you might get a good gyro joint. The side of rustic mashed potatoes was even better — just buttery-tasting enough and flecked with bits of potato skin.

The Bay Area actually has an abundance of kid-friendly Mexican restaurants, but a lot of them serve a gringo-ized version of the cuisine that might not please the grownup Mexican-food lover. In that respect, Otaez (1619 Webster St., Alameda, 510-521-9090), whose Alameda location is especially family-friendly because of its spacious dining room and off-street parking lot, offers the best of both worlds: The kids’ menu offers authentic Mexican dishes like caldo de pollo and Mexican-style shrimp cocktail, and the kids’ combo plates ($3.99 for quesadillas, rice and beans, and an agua fresca) are a good deal. Meanwhile, the giant, inexpensive margaritas and excellent daily specials (including one of the better carnitas plates in the East Bay) will keep grownups happy.

Some families might not think to bring their kids to a Korean restaurant, for fear that the food would be too spicy. But it’d be a shame to miss out on the kids’ rice bowl at Bowl’d (1479 Solano Ave., Albany, 510-526-6223), available for children ages seven and younger. The restaurant specializes in bibimbap (rice bowls topped with assorted meats and vegetables), and the kids’ version comes with your choice of protein — we picked the sweet marinated beef (bulgolgi) — and a bowl of miso soup. But that was just the starting point: The meal also came with a package of toasted seaweed (my daughter’s favorite snack food), an assortment of colorful pickled vegetables, and a single heart-shaped chicken nugget (the one “conventional” element). To finish, there was one of those cute little Korean yogurt drinks. All in all, the entire meal was an eye-catching and finger-friendly delight, perfect for kids.

But maybe the best kids’ meal is the one served at Juhu Beach Club (5179 Telegraph Ave., Oakland, 510-652-7350). Everything about chef Preety Mistry’s kids’ meal is inspired, from the cute fez-topped monkey on the menu, which doubles as a coloring sheet placemat, to the brightly colored, multi-tiered tiffin boxes that children unpack at the table, each layer containing its own hidden treasure.

Our daughter’s favorite option is the tender butter chicken, which comes in a sauce that’s rich and delicately spiced (ingredients include cardamom, cinnamon, and ground cloves) but not at all spicy. There’s also a grilled-cheese pav (an Indian-street-food-style slider) for kids who want something that’s “less weird,” as Mistry put it.

Another layer of the box contains your choice of rice or French fries (both excellent). The last contains a crunchy kachumber salad, which, Mistry conceded, is almost always eaten by parents. Still, she plans to keep the salad, in hopes that kids will at least get some concept of what a balanced meal might look like.

Ultimately, the tiffin boxes illustrate what a truly great kid-specific dish can do. It turns a meal into a special occasion, one that shows children how fun and flavorful food can be — and that sometimes trying something new can really pay off.