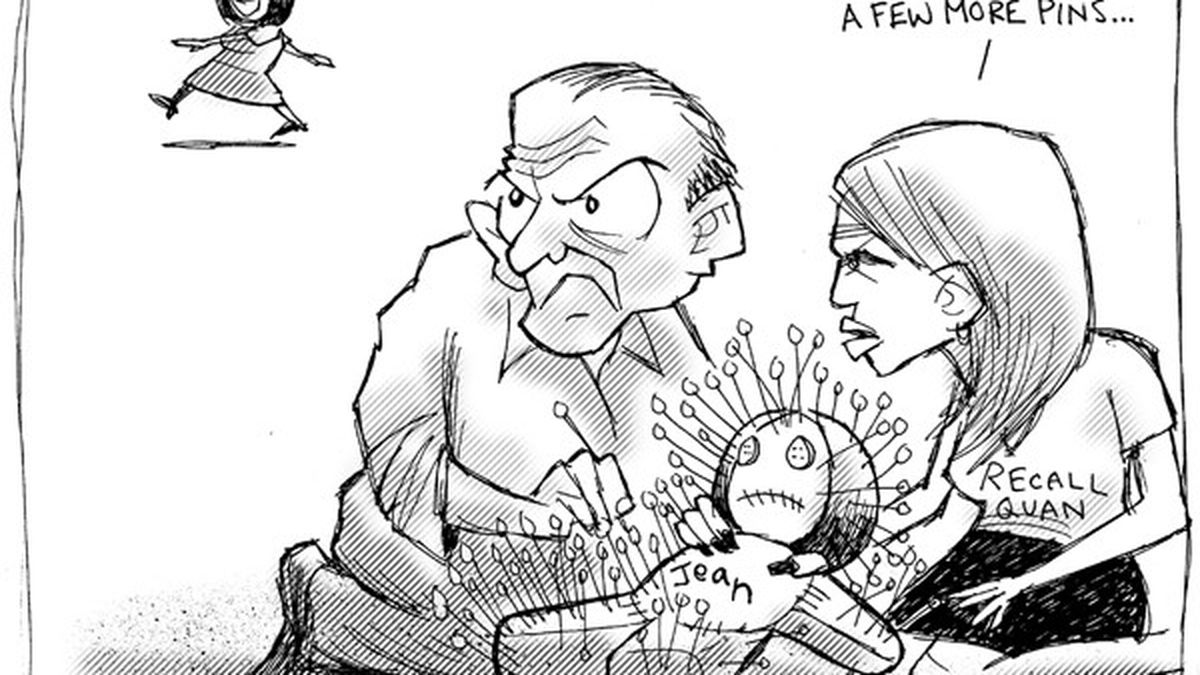 Now that two of the three efforts to recall Oakland Mayor Jean Quan have failed, backers of the remaining one should abandon their foundering campaign as well. The recall campaigns have been a distraction, and have caused unnecessary division in the city. They’ve also been costly, especially for the supporters of the remaining campaign.

According to the most recent campaign finance reports, the Committee to Recall Mayor Quan Now — the last remaining recall effort — has racked up $26,166 in debts, and has virtually no money to hire paid signature-gatherers. In fact, the group has only raised about $17,000, far short of the money it needs.

Unless some deep-pocketed donor suddenly decides to pony up the $45,000 the campaign needs to pay its debts and hire signature-gatherers, the effort has no chance of garnering the required 20,000 valid signatures. But that seems unlikely, because it would be a waste of money. A recent poll commissioned by Oakland political consultant, Larry Tramutola, who managed ex-state Senator Don Perata‘s mayoral campaign against Quan in 2010, showed that only 34 percent of city voters said they would recall the mayor from office. “Even if they could get the recall on the ballot, the question is could they win the election, and I don’t think that would happen at all,” Tramutola told the Oakland Tribune.

Moreover, Quan’s supporters have proven that they would put up a formidable fight. They’ve already outraised the recall proponents by a margin of nearly 5-1. Reports show that the Committee Opposing the Recall of Mayor Jean Quan has raised $79,000, and its list of donors is more than five times as long as the remaining recall committee.

In addition, the Committee to Recall Mayor Quan Now appears to be in disarray, and doesn’t even know how many signatures it has collected. One member of the campaign told the Tribune it had just 7,000 signatures, while another told the San Francisco Chronicle that it had 12,000 to 15,000. Frankly, we’d be surprised if the group had managed to get 7,000. The group’s lack of funds has prevented it from hiring the signature gatherers needed to fan out across the city. Charles Pine, leader of one of the other recall groups, admitted to the Chron that “the recall lost.”

Since last fall, disorganization has been the hallmark of the recall efforts. The campaign originally split into three groups because members couldn’t get along and accused each other of mismanagement. Eventually, the two efforts, led by Pine and activist Gene Hazzard, fizzled out when they couldn’t spark the enthusiasm needed to succeed.

That left the last group — the Committee to Recall Mayor Quan Now. But it’s sputtering, and the only way it might succeed is if it gets a big infusion of cash. But that seems unlikely because Oakland donors don’t usually throw away their money on an effort that even Perata’s campaign manager says is doomed.

As such, it’s time for the final recall group to throw in the towel. If they really want to replace Quan, they’ll get another chance just two years from now when she faces reelection in 2014.

Oakland’s receipt of a warning letter from state Controller John Chiang on the use of redevelopment funds has been making headlines over the past week. Chronicle columnists Philip Matier and Andrew Ross have repeatedly made a big deal out of the letter, contending that Chiang is demanding Oakland pay the state more than $30 million for redevelopment expenditures involving the Henry J. Kaiser Convention Center and the proposed Coliseum City project. However, the letter from Chiang, obtained by the Express, makes no mention of the Kaiser or Coliseum City, nor does it demand that Oakland pay the state any money. Instead, Chiang’s missive is merely a form letter that he sent to cities and counties throughout California. The letter is not even specifically addressed to Oakland.

Chiang’s letter, dated April 20, begins, “Dear City, County, or Public Agency.” It goes on to say that the Controller’s Office plans to “review and audit cities, counties, and public agencies” in the coming weeks to determine whether they should have to pay the state any money for redevelopment deals made after January 1, 2011. Chiang ends his letter by stating: “If you have any question as to whether a particular asset must be returned, you should place such assets into a reserve pending our review.”

In Oakland’s case, the city council last year effectively did just that, placing far more than $30 million or so in question into the city’s reserve fund. As a result, the city will have no trouble paying the state $30 million — if Chiang ultimately decides it must. “Even under the worst-case scenario, we have $45 million in reserves,” Quan said. “We can cover this.”

However, it’s still an open question as to whether Oakland will have to cover it. Because Chiang is targeting cities and counties throughout California, the issue of redevelopment deals approved last year could end up in court. And if it does, Chiang does not have the best litigation record when it comes to challenging expenditures made by public agencies and officials.

Just last month, Chiang lost a key court ruling against the state Legislature. A Sacramento County Superior Court judge said Chiang violated state law when he withheld paychecks from California legislators. Chiang had contended that legislators failed to pass a budget on time last year and so they didn’t deserve to be paid. But the court indicated that Chiang overstepped his authority.

In Oakland’s case, the Kaiser Center deal involved Oakland’s redevelopment agency purchasing the center from the city for $28 million. The Oakland City Council unanimously approved the deal last spring. The council then put most of the money from the transaction into the city’s general reserve fund.

The Coliseum City project, meanwhile, involved Oakland using $3.5 million in redevelopment funds to study the proposal. The project would include new stadiums for the A’s, Raiders, and Warriors amid a housing, retail, and entertainment district. City officials view the project as their best hope for keeping their sports teams from leaving town.

Matier and Ross, however, have portrayed Chiang’s form letter as representing a major blow to the Coliseum City proposal. But it’s hard to see how that’s the case because Oakland has plenty of money in reserve to cover the $3.5 million for the Coliseum City study — and the $28 million Kaiser sale — should Chiang and the courts eventually rule that it must do so.