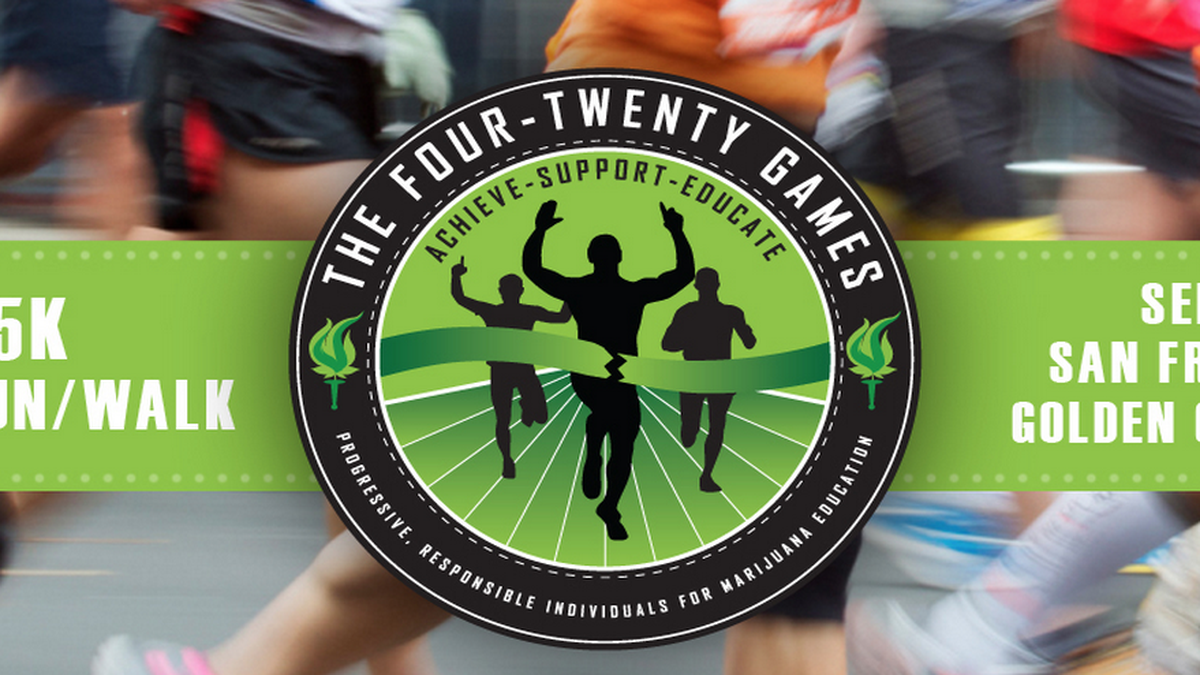 A weird side effect of the California drought — the world's first "420 Games."

A prominent sign at the recent High Times Medical Cannabis Cup in Santa Rosa read “Winners don’t smoke weed, champions do.” That sentiment — part of marijuana’s ongoing acceptance by mainstream America — will take on added meaning on September 13 in Golden Gate Park with the first-ever 420 Games.

It will be your typical five-kilometer run-for-a-cause designed for 1,000 entrants — except that the cause will be cannabis civil rights. Lagunitas Brewing Company will be throwing the after-party, with a performance by the all-female Led Zeppelin cover band Zepparella.

No, you won’t have to smoke pot and then run 3.1 miles. This isn’t some half-baked, unprofessional event. In fact, plenty of non-smoking supporters of the cause are signing up.

The event is being organized by Jim McAlpine, president and founder of SnowBomb.com, a major Bay Area snow sports ticketing and events company. He notes that, technically speaking, no smoking is allowed in Golden Gate Park.

McAlpine has all the necessary permits. And it was a strange twist of fate that led the leader of SnowBomb to organize a weed-positive 5K.

For years, SnowBomb has been the leading company for hooking up Bay Area skiers and riders with deals on lift tickets and equipment. The company organizes equipment sales each fall, and hosts mountain concerts during the snow season. Problem is, snow levels have been bombing.

Since California’s extended drought began three years ago up, mountain snowpack has been nearly nonexistent. It peaked last season at 32 percent of its historical average in April. And no snow means no snow business.

McAlpine was up at his Tahoe cabin in May, planning SnowBomb’s 2014-2015 season, when he started to freak out. “It sucked, man,” said McAlpine. “Last year was the worst year in the entire history of the company. That’s the reason The 420 Games were born.”

McAlpine uses cannabis medicinally for his bad back and knees. Like many patients, he said that certain strains of weed also help him focus. He was smoking a joint alone in his cabin at 10 o’clock one night when the idea of launching The 420 Games hit him. “It slapped me in the face,” he said. “I thought, ‘Oh, my god. This is it. I have to do this.'”

Cannabis is now more mainstream than ever. About 54 percent of Americans support ending pot prohibition, and more than 80 percent support medical access to cannabis. In July, The New York Times editorial page issued a historic call in July to end marijuana prohibition nationwide. Whoopi Goldberg regularly endorses legalization on The View. Even President Obama has admitted that weed is safer than alcohol.

But a deep stigma endures. For one, pot’s federally illegal, and about 750,000 Americans will be arrested this year for marijuana offenses — mostly for possession. You can also lose your student housing and student aid, get kicked out of school, and be denied employment, adoption, and professional licensing because of marijuana.

It also might seem counterintuitive to throw a 5K run in support of a drug that critics claim causes laziness and apathy, until you remember that world-class athletes also love weed. The Pittsburg Steelers’ starting and back-up running backs — Le’Veon Bell and LeGarrette Blount, respectively — were caught just last week with 20 grams of herb.

And there are reasons why athletes like pot. Cannabis contains powerful anti-inflammatories and analgesics. It’s been shown to help regulate metabolism, which is why stoners are, counterintuitively, skinnier than the average population. Smoking weed is not associated with lung cancer, but is associated with increased lung volume (ahem, Michael Phelps).

Used recreationally, it’s a less harmful way for athletes to chill out than alcohol or cigarettes.

The first snowboarder to ever win a gold medal, Ross Rebagliati, had his medal taken away from him for testing positive for pot. The Olympics then had to give the gold medal back to Rebagliati because anti-doping rules at the time did not cover weed. Last year, the Olympics relaxed its anti-doping limits on THC metabolites by a factor of ten.

Which brings us to the 420 Games. “I stayed up the entire night writing the business plan,” McAlpine said of The 420 Games. He tapped his deep connections in the worlds of skiing, snowboarding, running, tennis, and other athletics in the Bay Area to get the word out about the event. Lagunitas has released “420” beers in the past, and came on-board as a co-sponsor after a phone call, he said. The 420 Games has also nabbed deep-pocketed backers, including WeedMaps.com and Harborside Health Center in Oakland.

First came a website, then a press release and ground campaign. Sports stores have been really receptive to hanging posters, McAlpine said. “Most people grab the posters when I start talking to them and quickly look at it and don’t see marijuana.” (The event’s motto is “Achieve. Support. Educate.”) “Then there is that first second when they see marijuana, and they get tense and tense up and start to scrutinize it a bit more,” McAlpine continued. “It takes about two or three minutes of talking for them to realize just what it is. Then, they’re really, really supportive. It’s amazing how many are. I’ve gone to tennis clubs and running stores in Marin. I’ve only had one person reject them.”

The 420 Games is going to sell out, and McAlpine has bigger plans for the future. The 5K is part of a series, which is also going to include a Stand-Up Paddle Race on Lake Tahoe and a bike marathon in Orange County that will be limited to one-gear cruiser bikes. The series will conclude with a contingent of 420 Gamers running in the next San Francisco Half-Marathon.