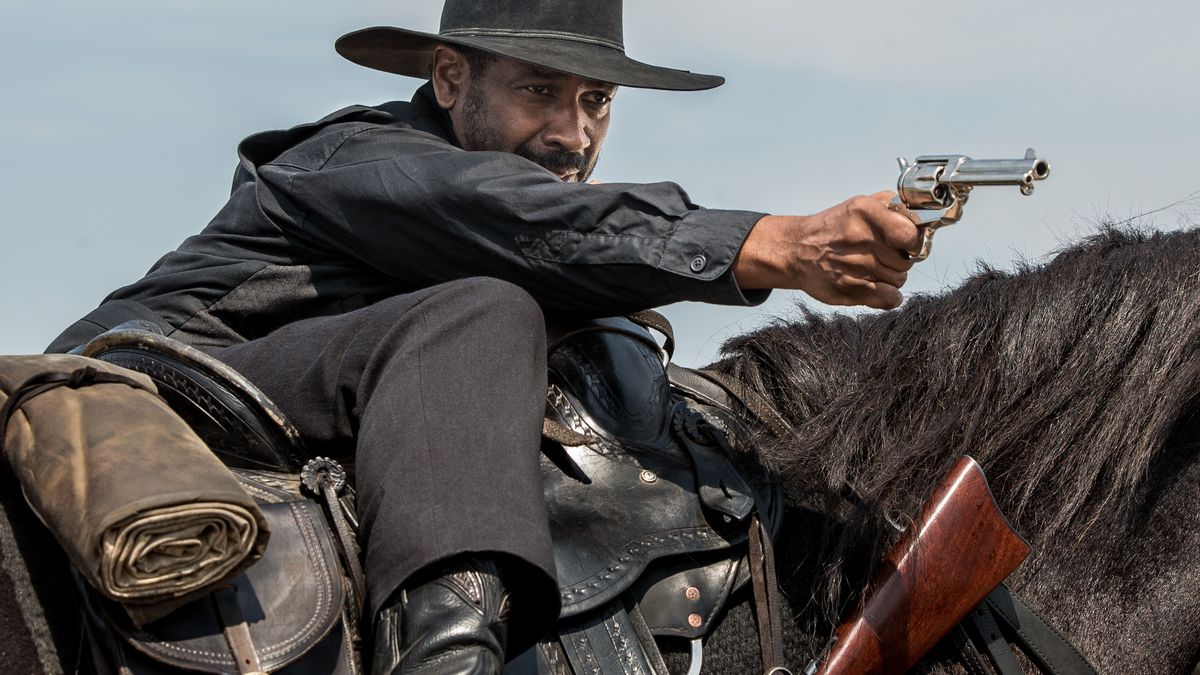 Denzel Washington and friends straighten out the Gold Country.

Before we even enter the theater, Antoine Fuqua’s exhilaratingly mega-violent The Magnificent Seven has an advantage over most other remakes: An unbeatable story. It began with Aeschylus’s ancient Greek play Seven Against Thebes, essentially the chronicle of a dispute between brothers. It’s a complicated tale — look it up. But the property fully assumed mythic proportions for modern filmgoers with Akira Kurosawa’s Seven Samurai (1954), followed in 1960 by John Sturges’ Hollywood western redo, The Magnificent Seven. Fuqua’s film builds on that foundation. All three scenarios share the same theme: A small but determined band of warriors gets together to oppose a large army of wrongdoers, with the understanding that most of the seven will probably die.

Director Fuqua (Shooter; Training Day) wisely follows the template, with a few 21st-century wrinkles. As in the earlier movies, there’s a helpless village in need of defending. Rose Creek, California, circa 1879, is a docile community of churchgoers in danger of being completely overrun by the Bogue Mining Company, a textbook despoiler of the environment owned by Bartholomew Bogue (Peter Sarsgaard) and his battalion of hired gunmen. Bogue is the epitome of a rich, sadistic psycho — a capitalist run amok — with nervous tics and lightning shooting out of his eyeballs. His army is as brutal as Nazis.

By contrast, peace-officer-turned-bounty-hunter Sam Chisolm (Denzel Washington) is the coolest customer in the Gold Country, a soft-spoken pistolero who can clean out a saloon in a jiffy if he needs to. We might expect that at least one of Chisolm’s cowboy adversaries would hurl the “N” word at him, but that never comes up. Chisolm’s race stands as a given. Likewise for his six mismatched comrades.

Chief among them is Faraday (Chris Pratt from Jurassic World), a drifter/prankster with a fondness for card tricks. Mexican gunslinger Vasquez (Manuel Garcia-Rulfo) swears more in Spanish than the other guys do in English. There’s an Asian in the bunch, knife fighter Billy Rocks (Korean action star Lee Byung-hun). And a Native American brave called Red Harvest (Martin Sensmeier), in war paint with a quiver full of arrows. There’s even a scruffy frontier hermit philosopher, Horne (Vincent D’Onofrio, once again channeling Orson Welles, this time in the guise of Falstaff from Chimes at Midnight). Ethan Hawke rounds out the seven with the second-quirkiest character in the movie (behind Sarsgaard’s loco Bogue), a former Confederate sharpshooter named Goodnight Robicheaux, now visibly haunted by his past.

As formulated by Fuqua and writers Richard Wenk and Nic Pizzolatto — adapting the 1954 screenplay by Kurosawa, Shinobu Hashimoto, and Hideo Oguni — the 2016 version takes care to present the heroes and their adversaries in contemporary terms, underneath the mutton chops and dirty wool suits. The movie doesn’t suffer as a result. All the protagonists have clearly defined counterparts in today’s America.

The Magnificent Seven could be taken as both an op-ed think piece and a high-body-count spectacle — very high — climaxed by a twenty-minute gun battle, with nothing lost. An ordinary Rose Creek citizen, red-haired vigilante Emma Cullen (Haley Bennett), can represent anyone who dares to oppose a predatory Bogue Mining Company, anywhere, at any time. Emma is the sort of righteous rebel that Aeschylus, Kurosawa, or Steve McQueen could admire. But let’s stop comparing Fuqua’s rousing portrait of struggle to anything that came before. Outside of being a tad overproduced, it stands on its own perfectly well.

Shut Up and Drive