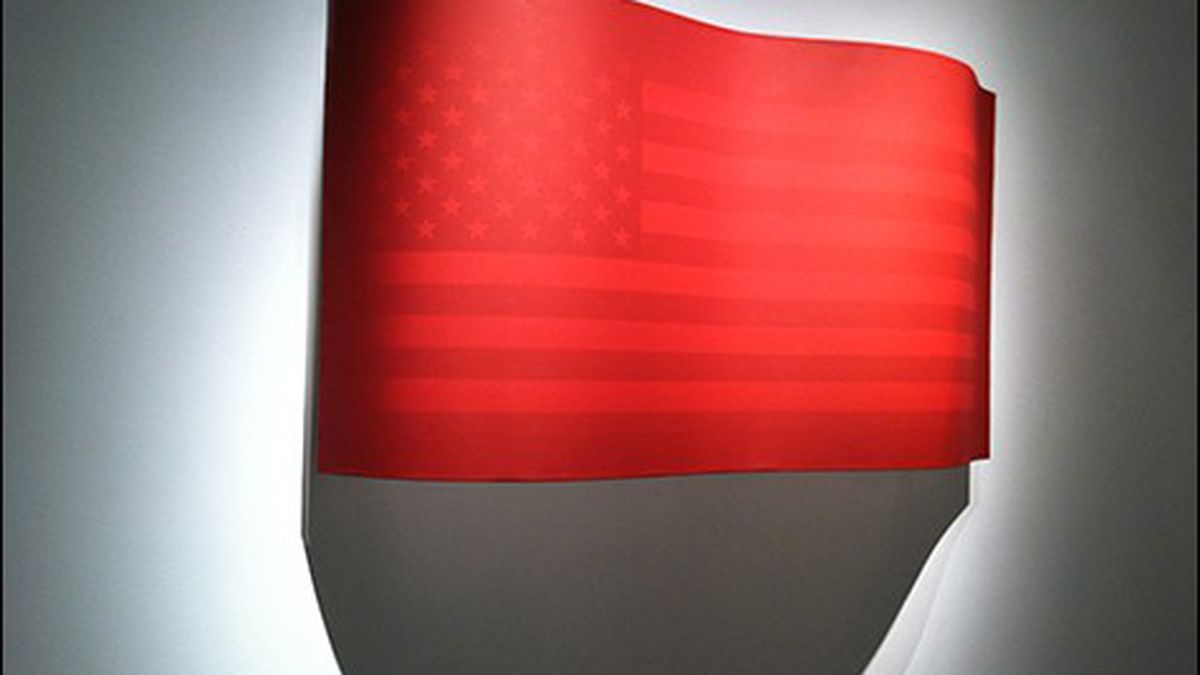 Leah Markos’ Pennants embraces the many meanings that a cultural symbol can hold. Even the exhibition title could evoke multiple interpretations. While a “pennant” is a flag, its homophone, “penance,” means repentance to a higher power. The juxtaposition of these meanings is at the core of Markos’ new work, which is now on view at Mercury 20 (475 25th St., Oakland). The collection of conceptual sculptures engages the viewer in a poetic contemplation of patriotism. By forming three-dimensional compositions of symbolic forms, she summons associations for the viewer that work together to bring new light to notions of belonging.

In the installation piece “Pennants Alcove,” white streamers (like those often found in used car lots) hang from the ceiling over a patch of fake grass. The intention behind the piece is ambiguous at first glance, but upon rumination, the minimalist composition evokes imagery of a backyard BBQ or another suburban festivity. At her artist’s talk, Markos admitted that the piece is meant to prompt the question, “What are we celebrating here?” in regards to American ideals of the nuclear family and the dream of owning a home with a white picket fence.

“Big Red” is a large American flag with stars and stripes that are fogged behind a vibrant, red tint, like a veil of urgency. When asked whether the piece was political, Markos said, “I don’t fancy the idea of making art that kind of hits you over the head — but it’s a big red flag!” However, the artist usually tries to avoid dictating the reception of her work. Rather, she aims to engage the imagination of the viewers in ways that will lead them to the source of her critique. The result is a metaphorical presence that is subtle, yet not opaque — elucidated by the viewer’s personal identification with the iconography.

The critique behind the abstraction is a cynical take on notions of false community and nationalism. “Brella Black,” for example, is a nearly four-foot-tall pole with hard, acrylic, black flags fanning out from its tip like a child’s pinwheel turned sideways. Together, the symbols of patriotism form a makeshift umbrella, a comment on our tendency to rely on a sense of community to feel safe.

Markos is a designer by day, and it shows in her elegant aesthetic. Primarily using materials that give off a crisp shine, she has a sleek execution that stands out in the DIY aesthetic of the East Bay art scene. Her attention to detail also comes through in her limited palette of white, black, and red (aside from the green AstroTurf). Markos suggested that viewers let the colors conjure personal associations, but also alluded to the role they played in relaying the idea that society is filled with constructed binaries — like black and white. In other words, whenever there is an “us,” there is always a “them.”