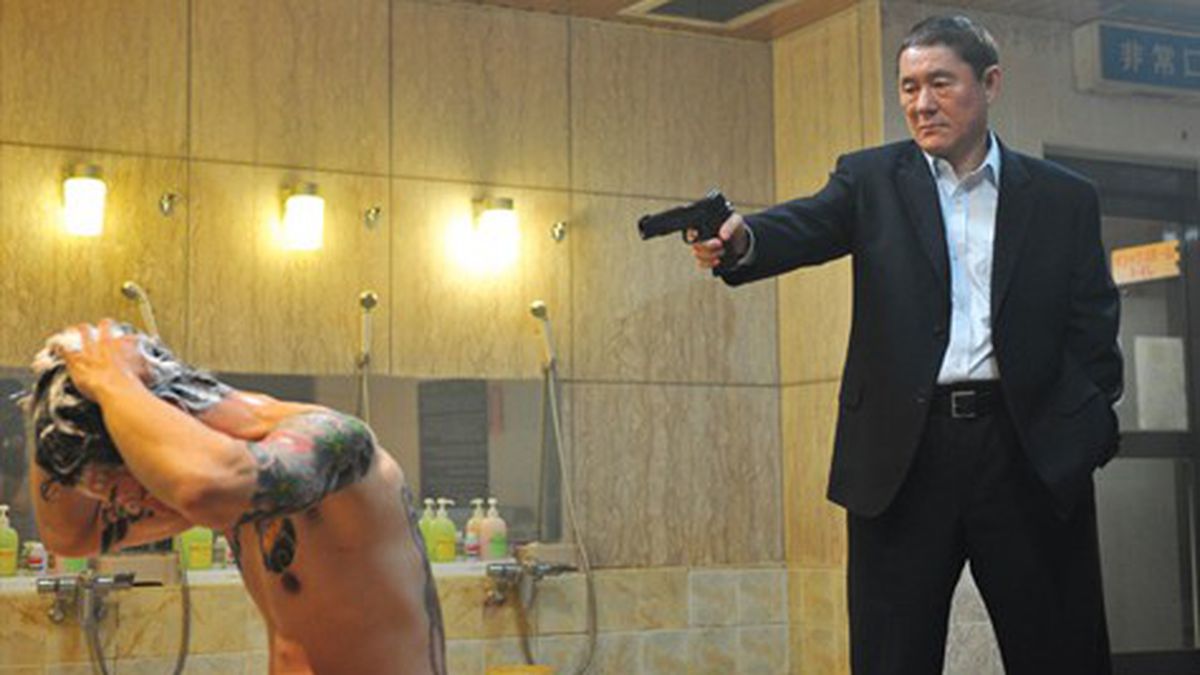 Sometimes a brisk genre pic is the best remedy for holiday-season film bloat. After sitting through hours of cynical nostalgia, top-heavy Oscar-bait costumers, and dispiriting children’s movies, nothing cuts through the cream cheese like the sight of a man slicing off his pinky with a sharp knife. Beat Takeshi can provide.

“Beat Takeshi” Kitano, a stand-up TV comic turned tough-guy actor, was unknown to American audiences until his 1983 role as a brutal Japanese army sergeant in charge of English prisoners of war in Nagisa Oshima’s Merry Christmas Mr. Lawrence. As the relentless Sgt. Gengo Hara, Kitano takes a break from battering David Bowie to soliloquize his soldier’s fantasy — something about riding atop Marlene Dietrich’s tummy in a hideaway in Manchuria — and in the space of that one scene sets the tone for everything he has done since.

Kitano reached a career zenith with a series of self-directed crime-actioners-with-a-difference beginning in the late-Eighties. Violent Cop, Boiling Point, the marvelous Sonatine, and Fireworks established his unique persona: a cold-blooded, ruthless, taciturn killer whose unpredictable lapses into banality were balanced by a bitter sense of humor. Beat Takeshi’s essential character didn’t deal in slow-burns — he went from zero to a hundred in two seconds, one minute idly bantering with his crew on a beach, and the next murdering everyone in sight.

People like Quentin Tarantino gushed in admiration, whereupon Kitano promptly detoured into sentimental dramas (Kikujiro) and odd one-offs like Oshima’s homosexual-samurai saga Taboo and the Battle Royale two-parter, with the veteran actor appearing as the catalyst in a teenage survivalist bloodbath, directed by Kinji Fukasaku. More often than not, the presence of Kitano in a cast list promises sudden death and lots of it.

Outrage, a 2010 Japanese release just finding its way to stateside screens, represents the actor-filmmaker’s return to the yakuza genre after some ten years. He stars as Otomo, a mid-level thug in the Ikemoto faction of the Sanno-kai family. The characters don’t necessarily recognize it but we can see that Otomo’s organization is engaged in the process of passing power from the older generation to a younger one. The transition is an especially bloody one because while Otomo, his boss Ikemoto (Jun Kunimura), and the big boss Mr. Chairman (Soichiro Kitamura) are playing musical chairs they’re also skirmishing with their rivals in Tokyo’s drugs, gambling, extortion, and hostess-bar rackets, the Murase family.

Just for fun and also as a pretext for open hostilities, one of Otomo’s hoods, a guy with a particularly innocent face, pretends to be an innocent salaryman and allows himself to be hustled into one of the Murases’ girlie clubs in the Kabuki-cho district. When the “sucker” is presented with an outrageous bar bill, he talks a couple of Murase goons into accompanying him to his office, to get the money. But the “office” is Otomo’s headquarters and the Murase goons end up getting clipped instead. Once the inter-gang prank is revealed, boss Murase (Renji Ishibashi) sends a low-level soldier over to Otomo with orders to amputate his pinky as a face-saving gesture. Otomo demands more — a Murase underboss is forced to sacrifice one of his digits as well, then as an added bonus gets his face slashed. This means war. And so on and so forth.

A major factor in Beat Takeshi’s appeal in this type of movie is his tendency to display indifference, bordering on contempt, for traditional yakuza rituals and their insistence on points of honor — and yet to follow those same rules with startling ferocity in the very next scene. Thus Otomo spends much of his time casting sardonic glances at his comrades as the two sides retaliate ad infinitum, and then gleefully upping the violence ante. The turning point comes when Ikemoto’s men begin openly grumbling about their boss’ deals with Murase. Mutinous mayhem ensues. After awhile it becomes humorous, this game of appearances and face-saving and double-crossing. Everyone sells everyone else out. We have time to focus on the fine points of style and characterization.

Movie fans who have followed the vintage yakuza films of actor Ken Takakura and director Fukasaku will understand the ironies immediately. The copious bloodletting exists for its own sake with the ancient “code” trailing along behind — at one point a character even observes that all this pinky-cutting is a bit old-fashioned. The movie’s best running gag involves the ambassador of a fictitious country called “Gbana,” who has been running drugs out of his country’s embassy. With a little persuasion — including a murder blackmail lifted from The Godfather: Part II — the befuddled ambassador is coerced into fronting a casino for the Otomo crew.

At age 63, Beat Takeshi has acquired the look of the late-period Charles Bronson. It suits him. His features, surgically repaired after a notorious 1994 motorcycle accident, have the dull sheen of rumpled parchment, yet his eyes are as chilly and noncommittal as ever. The new face of the Otomo-Ikemoto-Sanno-kai group is probably Mizuno (crime-movie vet Kippei Shiina), a suave schemer. Or maybe it’s Ozawa (Tetta Sugimoto), the dull, dependable type. Or Ishihara (Ryo Kase from Clint Eastwood’s Letters from Iwo Jima), a bespectacled guy who speaks English when necessary. Writer-director-editor Kitano has a wonderful feel for the dynamics of treacherous male camaraderie — the boredom as the underlings stand waiting in the sun, in front of a line of black limos, for their bosses to finish lunch; the sudden call to arms; the cruel, capricious practical jokes professional thieves play on each other while toying with their victims.

Outrage functions more as a reminder of past glories than as a harbinger of new concepts in genre. Its glories are modest ones of character and detail, with the froglike Beat Takeshi squatting on his lily pad in the middle of a boiling pond. Newcomers to the world of this place-specific type of gangster film are advised to check out his mid-Nineties work as well as the remarkable riffing of filmmakers Fukasaku (the Yakuza Papers series) and Yasuharu Hasebe (Bloody Territories, Black Tight Killers) from earlier decades. But ultimately, Outrage is less baroque than it probably needs to be. In the case of Takeshi Kitano, the more things change, the more they remain the same.

Oakland Is the Better Option for the Warriors