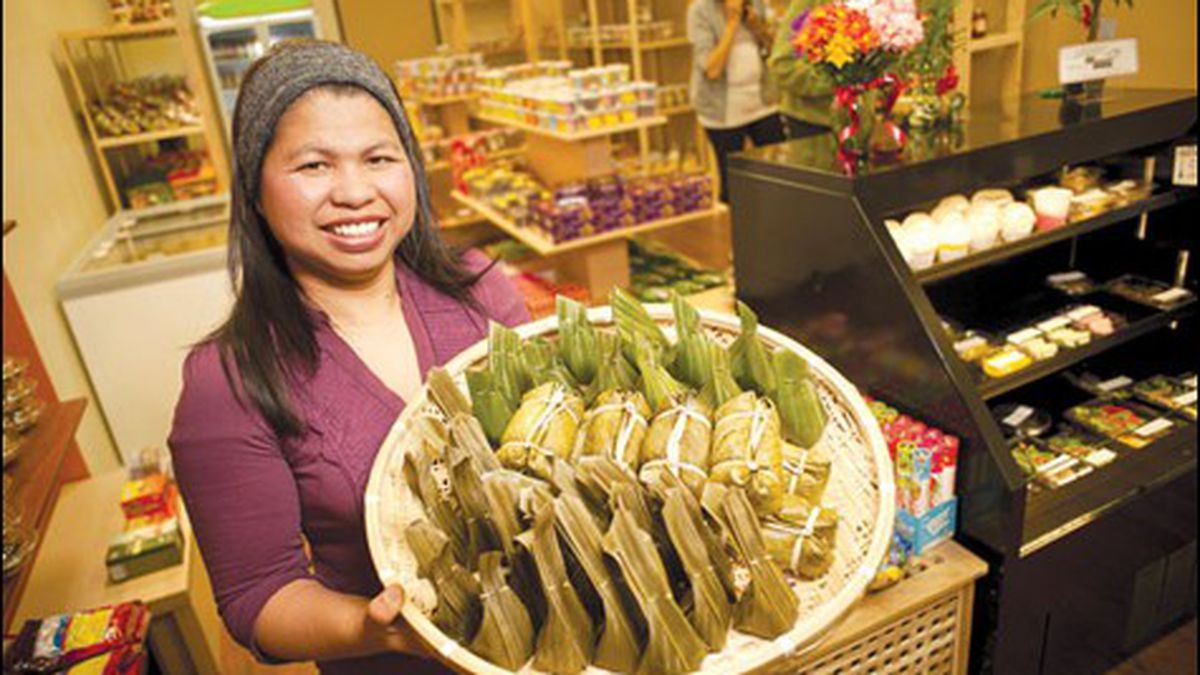 The new to-go shop in Richmond's Pacific East Mall serves authentic home-style Thai. Good luck getting it out the door.

It looks like a craggy lump of tomato paste, bleeding orange into a bowl of hot rice, but the flavor? It’s electric: the sweet-sour stab of tamarind, chile burn, and murky fish-sauce depths, over an antiseptic lushness that half-resembles fennel seed. But it isn’t fennel that gives this rugged chile paste its perfume. It’s mangda, the roachlike insect used to flavor this type of nam prik, the ubiquitous Thai condiment.

And while it’s pretty easy to buy nam prik made in bulk and sealed in jars, and somewhat harder to make your own in the food processor, it’s not every day you can buy mangda chile paste pounded up with a mortar and pestle by a Bangkok-born mom. And finding one where nearly half the ingredients are organic? That’s rarer, even, than crushed-up water beetles.

It all began a couple of months ago, when Salalinee Ekchit (call her by her nickname, Noot) transformed a nondescript box of a space in Richmond’s Pacific East Mall into Ran Kanom, a takeout Thai food shop. The back two-thirds offer up commercially made Thai snacks, sweets, and mixes: shrink-wrapped bowls of instant tom yum and Mama Cup Noodles, Thailand’s contribution to the instant-noodle canon; jars of toddy palm paste; and Ruffles-size bags of durian chips.

It’s the front third of the store, where Ekchit stands above a tray of neatly tailored banana-leaf packets filled with delicious sticky-rice sweets, that’s the heart of Ran Kanom (“snack shop” in Thai).

Raised in Pathum Thani, the northernmost province of metro Bangkok, Ekchit’s a veteran of the East Bay’s tom ka gai circuit. She operated a Thai restaurant in Martinez, and in 2009 launched a business selling the kind of prepack, home-style dishes she’s making now, sold from the Thai Thai refrigerator case in Berkeley’s Epicurious Garden food court. (Blame something in the Gourmet Ghetto air for Ekchit’s conversion to organics.)

Ekchit says the Thai Thai fridge is still there, though she ended her involvement with it earlier this year. But though she’s doing some of the same dishes she sold at Epicurious Garden, it’s for a completely different clientele at Pacific East Mall, with its 99 Ranch supermarket and merchants dishing up a wide range of Asian foods, from pho to Hong Kong waffles.

“Even if they’re not Thai,” Ekchit told me in the shop last week, after convincing a trio of skeptical-looking Filipino ladies to take a chance on stuffed coconut balls, “these customers know Asian food and will try something I make.”

As for me — white dude with an edge of shady (I think I was asking too many questions) — Ekchit executed a swift one-eighty from the kind of approach she took with the Filipino ladies, trying to dissuade me from buying anything she assumed I’d find too hot, too disgustingly fishy. Salted fish salad? She made a face as if I’d told her I was thinking of eating a barbecue pork bun I’d found on the floor in the men’s room. “Oh, only Thai people like this one!” Green papaya salad with salted crab? She screwed up her face again. “It’s so — hot!“

But if you look like me, and can resist Ekchit’s gate-keeper charms, one of the good things about Ran Kanom is that you can end up with a bagful of takeout dishes not altered for the general restaurant public. Some are jacked up spicier than you might be used to, most are sweetened with more subtlety, and almost all of them don’t hold back the funk, sparing neither fish sauce nor dried shrimp nor the concentrated taste of curing.

Take that green papaya salad, pretty as if it were heaped on a restaurant platter, in its black tray under a clear plastic lid. You take note of the ruffle of red-leaf lettuce lining one edge (see above, under Berkeley), but just as Ekchit warned, the heat quotient here is fierce. Before long my entire lower jar feels inflamed, as the crab — tiny joints of bluish-purple shell — emits a frankly fishy taste of the ocean.

Organic sun-dried pork is nearly as intense as the crab, though in a different way. Ekchit coats strips of lean pork (from Niman Ranch, the label’s careful to point out) with sea salt, and dries it jerky-style under actual sunlight, giving the chewy little strips an abiding muskiness. Thai five spices pork-leg stew is jellied, packed up in Ran Kanom’s cooler. Heated, it reveals long-cooked hunks from the hock, skin and thin layer of subcutaneous fat intact, in a sweet soy broth flecked with spices.

Organic pumpkin curry shrimp is delicious, with a rich and deeply spicy sauce lent body from puréed pumpkin, flavored with Ekchit’s own red curry paste (you can buy that in jars, too, though Ekchit says that, since she makes it by pounding in a mortar and her shoulder’s begun to give her trouble, she has it only every two weeks or so).

But the green curry chicken? Ekchit’s instincts for healthy eating have tripped her up. The sauce is over-thick, stodgy from too much pumpkin purée, a replacement for some of the high-calorie coconut milk. There’s a muffled bite to the curry, and the color’s split-pea-soup weird (Ekchit told me later she’d added spinach juice to make it green).

I never got to try the esan (Northeast Thai) sausage Ekchit makes and freezes (“Thai people like this,” she said, frowning, when I set one down on the counter). Organic wild salmon curry, however, turned out to be Ran Kanom at its best: a pretty banana-leaf cup, cradling a piece of cooked fish, its edges dissolving into a scant coconut-milk sauce, salmon-pink with curry paste, exploding with kaffir-lime freshness. Ekchit told me I’d like it, as she bagged it up wtih a smile that doubled as a blessing.