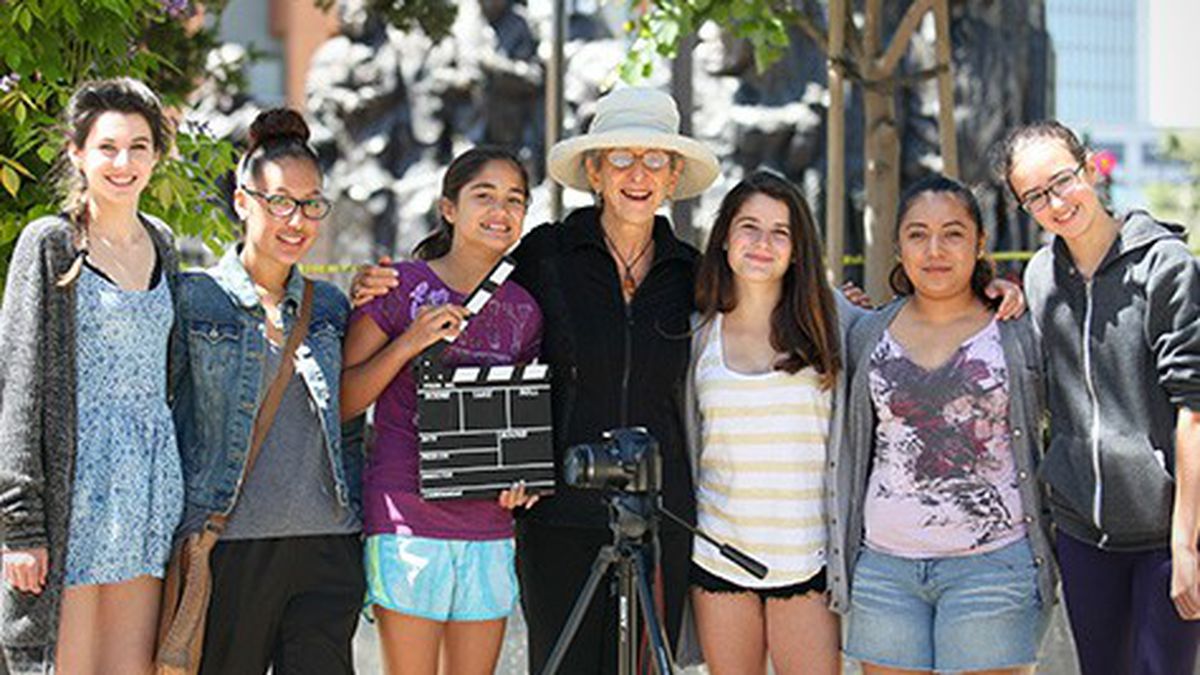 Camp Reel Stories aims to narrow the gender gap in the media industry by teaching teen girls to make films.

According to the Center for the Study of Women in Television and Film, only 16 percent of filmmakers are women. When I asked Esther Pearl about this dismal statistic in a recent interview, the Oakland resident and former visual effects coordinator at Pixar Studios pointed to environmental conditioning as a root cause. Because the media landscape is saturated with stories written and directed by men, young women often come to believe that successful careers in the industry have already been earmarked for their male counterparts, she said.

Pearl, who was also the board president of Bay Area Girls Rock Camp for four years, wanted to help narrow the gender gap in filmmaking. So, she founded the nonprofit Camp Reel Stories, an Oakland-based summer camp that specializes in training young women between the ages of thirteen and eighteen to write, produce, direct and edit films. Since the nonprofit’s creation in 2013, more than 150 aspiring filmmakers have gone to Camp Reel Stories and learned from female leaders in the industry. Pearl hopes that when her campers meet women who have broken the proverbial glass ceiling in a competitive and sometimes formidable business, they’ll gain the confidence to do it also.

“When we start teaching girls this [at a younger age], they’ll start to feel more comfortable telling their stories and feeling like a career in media is possible,” she said. Pearl also argues that a more diverse film crew will lead to narratives and casts that follow suit. “If women are better represented behind the screens in media, their reflections on the screen will be better.”

At $475 per camper, the price for admission to the five-day camp may be steep for many, but Pearl insists that campers are never turned away due to lack of funds. In May, the nonprofit raised more than $26,000 for camp scholarships and equipment through an Indiegogo campaign.

During the daytime program, which is held at the Oakland School for the Arts, the girls work together in small groups — referred to as “production companies” — to create an original short film from start to finish. The camp advertises itself as an accelerated, microcosmic version of the film industry, emphasizing the use of technology and media literacy in every stage of the creation process. Each potential film is discussed in pitch meetings, then goes through a production schedule and culminates in a screening at a film festival where the young filmmakers present their work to an audience of friends, family, and the general public. This summer’s screening will take place at the Lakeshore Theater inside the Kaiser Center on July 18, and will show around ten films.

For facilitators who work closely with the teenagers during camp, watching them find the confidence necessary to complete a film in less than a week is one of the most rewarding aspects. “Often on [the first day] there is a feeling from the campers that being able to make and finish a film is impossible,” said Kelly Lundy, camp coordinator and secretary on the nonprofit’s board. “But by [the third day], when they have camera and sound equipment in their hands, they are working together as a production company, calling out directions to their team and asking people for interviews, talking to local businesses and overall sharing their stories and their voice.”

Generally, the films included in the festival lineup wind up being as diverse as the girls who created them. Past screenings have included documentaries exploring body image issues and narrative films with sci-fi influences. According to several of the campers, narrative and expositional creation gives them a chance to develop artistically in a way they haven’t been able to in traditional high school programs. “My favorite part of camp was story development … piecing together narratives from the images, smells and sounds in my head and building characters from the ground up,” said returning camper Sydney Torrens, a creative eighteen-year-old who lives in the South Bay. She recalled that when she was younger, she would often build dollhouses and create sceneries based on those that she saw in movies, so she was drawn to the opportunity to construct her own for the screen.

Other returning campers were first introduced to film at Camp Reel Stories. “For me, it was just a great experience ‘cuz I was never in another program like this,” said eighteen-year-old Norma Anaya, who lives in Oakland. “When I started the program in tenth grade, that’s when I found my passion.” After the program ended, Anaya interned at the Berkeley Lawrence Labs in the media department and is going to continue her film studies in college at Cal State Chico next fall. Her production company’s most recent film for Camp Reel Stories focuses on a young female character who wants to be a street artist but lacks the necessary support from her family. “The message it’s trying to say is that you don’t have to change for someone else. Just be true to yourself,” said Anaya.

It’s a relevant statement to relay through a medium that has historically imposed unrealistic ideals of beauty and gender onto women — something that several of the campers said they struggle with. Anaya is now acutely aware of the lack of realistic representation of women in mainstream media, but she’s more determined to change the patriarchal pattern than to become influenced by it.

“I feel like [some film companies] think that women’s opinions aren’t valued as highly as men’s, but I think that if people actually look into the woman’s perspective, and see her story, it can change how a movie can be made,” she said. “A woman can make just as good of a feature-length film as a male can. There are opportunities out there if you push yourself and don’t let anyone — anyone — put you down.”

The Butler Did It