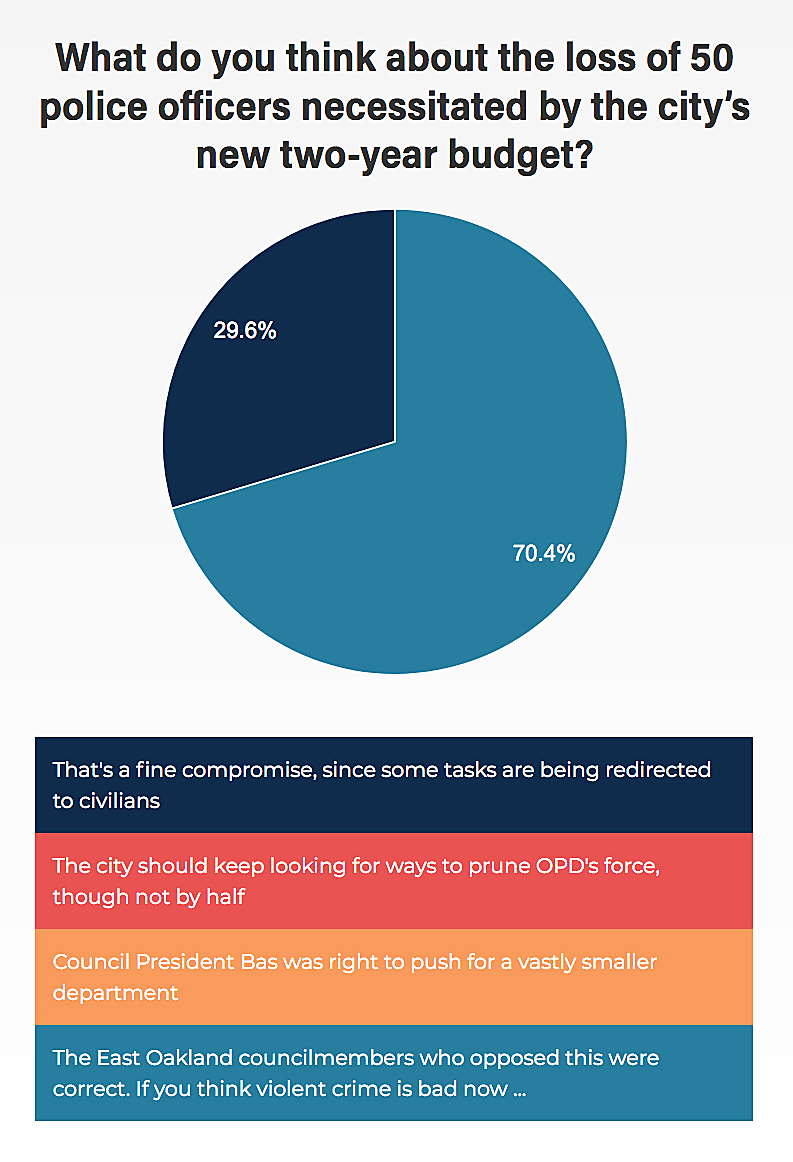 Starting this month, the East Bay Express will publish the results of the Oakland Power Poll. This is not a public opinion poll, but an ongoing discussion with several hundred people from a wide range of viewpoints. Our panelists come from government, business, law, nonprofits, the arts, activism and other sectors. Together, they help shape Oakland’s civic dialogue.

The Express is known for its occasionally opinionated reporting on a variety of topics. But this is not that type of journalism. We ask non-ideological questions about pressing issues to help advance informed dialogue about the city.

So often in contemporary society, the loudest or shrillest voices prevail. At a time when too many journalists and politicians strive to break us into warring tribes, we’ll use this exercise to explore where we agree.

Very few of the issues confronting society are truly binary, yes or no, up or down. Recent polls captured our panel’s nuanced positions regarding the proposed A’s stadium—“get it built, but get a better deal”—and the city’s reopening from Covid-19—support for employers asking employees about vaccination, even among people whose own workplaces do not. Our new poll on policing in Oakland is equally informative.

The Oakland Power Poll is part of a nationwide collection of 26 city-level surveys. Review our past polls and panelists at PowerPoll.com/Oakland.

More than 70% of the Oakland Power Poll panelists who responded to our latest survey believe the city council erred by passing a budget that will force the police department to slash its staffing. Voters expect the council’s decision to manifest itself in a new wave of violent crime.

Yet panelists also overwhelmingly favored efforts to reform the nature of policing, including investing more in social services, making it easier to get rid of bad cops and finding other ways to reform the undesirable elements of police culture. However, they agreed that police work remains essential until crime is reduced by other means.

In fact, a majority of respondents believe that Oakland should increase its officer-staffing levels until they are closer to those of an average American city—with not a single panelist favoring additional efforts to reduce staff levels. As if to explain their thinking, 92% of the voters who could recall their own experience with the city’s 911 emergency system say it was substandard.

Our survey asked a variety of questions about policing in Oakland after the council adopted a budget that Mayor Libby Schaaf says will make the city less safe by eliminating 41 police positions dedicated to 911 response, nine more for traffic enforcement and two academies designed to help the city train 64 new officers. Some of that money was diverted to the city’s Department of Violence Prevention.

Here are the specific questions and responses to our latest Oakland Power Poll:

What do you think about the loss of 50 police officers necessitated by the city’s new two-year budget?

The East Oakland councilmembers who opposed this were correct. If you think violent crime is bad now … — 70%

That’s a fine compromise, since some tasks are being redirected to civilians — 30%

The city should keep looking for ways to prune OPD’s force, though not by half — 0%

According to an analysis of 2015–19 FBI crime data by the OPD’s Crime Analysis Section, Oakland consistently has more violent crimes per police officer than any of the nation’s 50 other largest cities—which average about twice as many cops per crime. Should our police staffing be based on our crime rate?

Yes, we should increase our staffing until it’s more like that of an average city — 56%

No, we should search for other ways to reduce crime — 37%

Well, it would be nice if we had the money, but we also need to fund other things — 4%

Crime gets more attention than it deserves. There are other problems — 4%

Oakland’s 911 service consistently fails to meet the standards set by the National Emergency Number Association that 90% of all 911 calls should be answered within 10 seconds. What is your personal experience with Oakland 911?

Sometimes it is that fast, but not routinely — 46% of those who recall their experience (24% total)

Describe your general thoughts about policing and the OPD. Please select up to six positions you share, with the number “1” representing greatest agreement.

Until crime is reduced by other means, we can’t cut police spending — Score 3.64

We should invest more in social services and other means of crime reduction — Score 3.39

We can reform police culture without pretending that police are unnecessary — Score 3.32

It needs to be vastly easier to get rid of bad cops — Score 3.21

Considering how violent Oakland is, the OPD does a good job — Score 1.5

The department is a mess. Let’s hope new Chief Armstrong is up to the task — Score 1.46

Not only is “defunding” stupid, but that rhetoric benefits Trump and his ilk — Score 1

The “defund” movement has it right. We spend way too much money on police — Score .68

What are your other thoughts regarding OPD, police reform and crime?

Our poll results demonstrate the superficiality of so many discussions of policing. Panelists vigorously supported efforts to change the culture of police work, including reforms to make it easier to get rid of bad cops, and greater investment in social services and other forms of crime reduction. In fact, those positions were more popular than any other ranked-choice answer from all 15 prior polls. And no ranked-choice option polled more poorly this month than the proposition that “prison works.” In the words of one panelist, “we should invest more in deterrence (beat cops, patrols, traffic enforcement) and social services (mental health, poverty, homelessness) and less on reacting to crimes once committed.”

And yet, even in one of the country’s most progressive cities, there was even more agreement that police work remains essential until crime is reduced by other means. There has never been a more popular ranked-choice answer in the history of this poll.

“It strikes me as horribly paternalistic that the non-Black members of the council think they know what’s best for East Oakland, where crime is the worst,” wrote one panelist, with an opinion shared by others. “Those council members have the luxury of making symbolic know-it-all gestures while East Oakland leaders and residents actually want more and better policing because those communities are suffering at the hands of crime the most.”

Added another: “It’s not clear to me there is a plan in place that (1) identifies the services that need to be provided, (2) identifies which department(s) should deliver those services, and (3) lays out a timeline for changing the current model. I agree that we need to address root causes of crime. However, we need a plan that transitions us to a different model. I’m appalled that Councilmembers Reid and Taylor were not afforded more courtesy by their colleagues to the lived experiences of their constituents.”

Support was almost as high for the notion that Oakland can reform its police culture without pretending that police are unnecessary. And the notion of “defunding” police polled horribly.

As far as support for the OPD itself, roughly equal numbers of voters supported the propositions that the department “does a good job” and “is a mess.” “OPD does a great job with the resources they have,” wrote one voter. Countered another: “I run a retail business and am often robbed in the evening. When I call for police reports, the police almost never come, sometimes 2-3 days after I call. In the last few years, I have lost over $100K, not to mention damage to fences and vehicles/equipment.”

One panelist connected the dots between the high cost of police work and the contracts in which those costs are set. “The city does not negotiate well with the police union. The police union has a long-game view and the city negotiates from a short-term view—this makes it an uneven playing field and gives the union the upper hand, making staff more expensive (i.e. retirement programs).”

Discussions about public safety too often boil down to the crude reductionism of “defund the police” vs. “fortify the police.” Our panelists would prefer to “improve the police.”

“It starts at the top, which means it starts with elected officials,” one panelist wrote. “There have been decades of mismanagement and poor policy decisions. While there needs to be so much more invested in education, after-school programs and ‘pathways to success’ (technical schools, etc.) in order to give future generations guidance and hope, as well as create good employment, we need OPD to be strong AND representative of our community in order to help connect with and manage the current generation.”

So how else can we minimize officer involvement in mental-health crises and refocus their attention on solving crimes? What about changing how new recruits are evaluated and hired? And will cities ever revisit the labor rules that so often force them to retain even those officers no longer desired by their own departments?

When it comes to public safety, Power Poll panelists would like to see more nuance from their city council.

Next ArticleCoping With Covid … Still: Though there are signs of hope, California continues to struggle with the virus