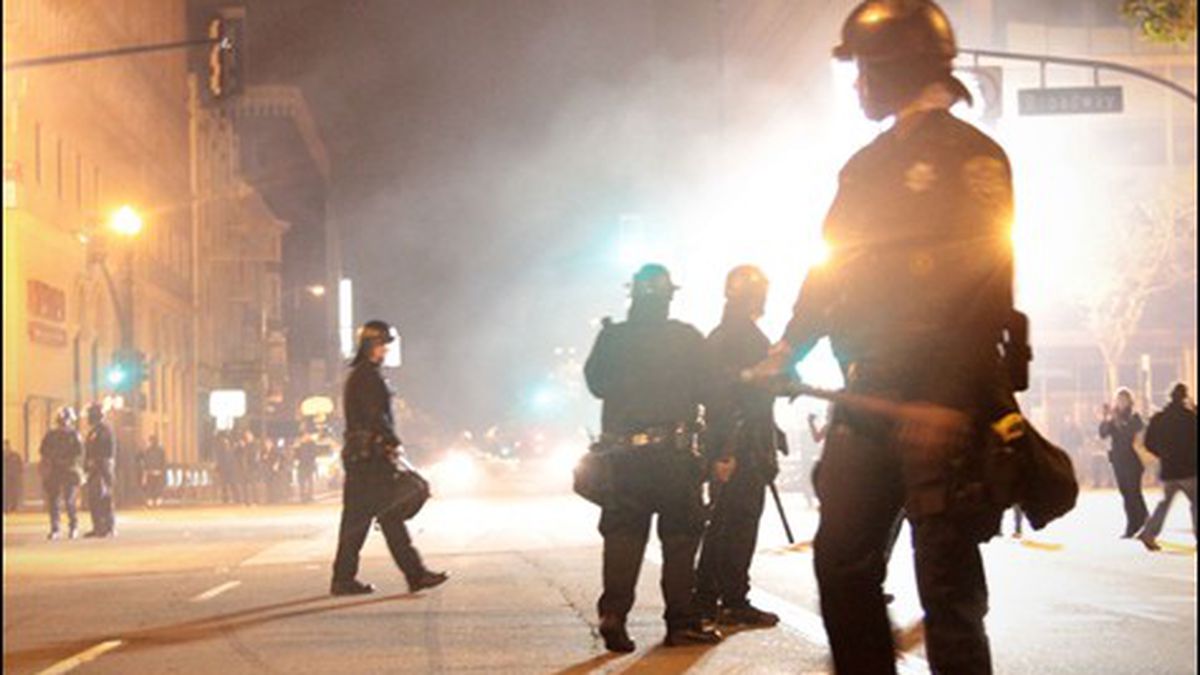 Oakland Police Department Sees Itself as a Victim of Occupy

A recent internal report also reveals that the head of Internal Affairs was in charge of field operations on the night of October 25.

Nearly six months have passed since the Oakland Police Department raided Occupy Oakland’s camp in Frank Ogawa Plaza, and the dust has yet to settle. Much of the fall and winter were marked by mass demonstrations, repeated clashes between law enforcement and demonstrators, and hundreds of arrests. As both sides gear up for what could be a momentous May Day action — and an equally large police response — at least four investigations are still probing law enforcement’s use of force on the evenings of October 25 and November 2.

Three of the inquiries are being conducted by OPD’s Internal Affairs Division, its Criminal Investigation Division, and by the Frazier Group LLC, a consulting firm hired by the city. The Frazier Group, headed by former Baltimore Police Commissioner Thomas Frazier, was retained to prepare an independent analysis of OPD’s handling of last fall’s protests, which attracted international attention after police unleashed tear gas and an arsenal of less-than-lethal munitions against thousands of demonstrators. Oakland officials came under intense scrutiny after two military veterans, Scott Olsen and Kayvan Sabeghi, were seriously injured by police officers on October 25 and November 2, respectively.

Several lawsuits have also been filed against the city as a result of injuries, mass arrests, and alleged violations of OPD’s crowd-control policies. The court-appointed monitor for OPD’s nine-year-old federal consent decree is also carrying out its own probe of police actions last fall. The outcome of the Independent Monitoring Team’s report could well determine whether OPD goes into federal receivership — an unprecedented event that US District Court Judge Thelton Henderson is considering in light of the struggle to reform OPD over the past decade.

While none of the four investigations have been completed, an internal OPD review of its actions on October 25 indicates that the department is trying to minimize any liability by playing up the perceived safety hazard of the Ogawa Plaza camp and “aggressive” behavior of Occupy Oakland supporters as justification for the initial raid and the use of crowd-control munitions that evening.

The recent Bureau of Field Operations report also provides a detailed account of the day’s events from OPD’s perspective — as well as previously unknown information about haphazard planning by the department. OPD had insufficient numbers of street officers and support staff for the second shift of the day, from 2 p.m. through 2 a.m., was not prepared to deal with protests following the morning raid, and allowed the date and time of the raid to leak out to Occupy Oakland. This was likely a result of OPD’s lack of planning prior to the raid, as per the following passage from the BFO report:

“The command structure for the event was not finalized until the day of the event. This allowed only minimal time for preplanning among the assigned command staff. The operational commander was assigned to his role hours before the incident. More in-depth discussions have not taken place as a part of the review process due to the ongoing civil litigation, internal affairs and CID investigations, as well as the external review.”

The report also portrays OPD as a victim of violent Occupy Oakland protesters. The report, for example, makes no mention of Olsen being seriously injured after a police officer shot him in the head with a less-than-lethal munition. Instead, the report goes into significant detail about alleged “assaultive” behavior by Occupy protesters on the night of October 25 and how a group of officers had been surrounded by angry demonstrators that evening at 8th and Washington streets before being “rescued” by fellow cops. “These officers exhibited a great deal of restraint while surrounded by an angry, assaultive crowd,” the report states.

The report also bears little resemblance to the public perception that Oakland police had severely overreacted on October 25. Reading the report, one would have no idea that OPD’s response that night would later be condemned by observers around the world. As such, the report raises numerous questions as to whether OPD will ever take responsibility for its actions.

Just as alarming, OPD’s slapdash planning prior to the raid resulted in Captain Paul Figueroa being put in charge of field operations for the second shift. The selection of Figueroa raises conflict-of-interest issues because he also is in charge of OPD’s Internal Affairs Division, a position he has held since 2010. IAD, under Figueroa’s supervision, is currently examining numerous allegations of excessive force and misconduct on October 25 — during an operation in which he was also responsible.

The Internal Affairs Division also has its hands full meeting the requirements of OPD’s federally mandated reforms. Per Judge Henderson’s requirements, IAD is tasked with preventing any recurrence of Riders-type misconduct. While Figueroa’s term in charge of IAD has recently seen a number of officers disciplined for Occupy Oakland-related misconduct, last fall the court monitor strongly criticized IAD for dismissing many misconduct complaints as “unfounded,” inappropriately giving more credence to officer testimony than to civilian statements, and failing to adequately address charges of police retaliation against citizens who filed complaints against OPD staff.

Samuel Walker, professor emeritus of criminal justice at the University of Nebraska-Omaha, said Figueroa’s position as IAD commander presents a “clear conflict of interest” with that division’s investigation into what happened on October 25. “There are serious management problems with this department,” said Walker, noting that Figueroa’s assignment on October 25 and the incomplete planning for a raid involving hundreds of OPD personnel and officers loaned on mutual aid showed that fundamental flaws have not been addressed despite ten years of court-ordered reform efforts.

Jim Chanin, a civil rights attorney who initiated the Riders lawsuit against OPD with John Burris, said the report also raises serious questions about the timing of the raid, which took place while Mayor Jean Quan was on a business trip to Washington, DC. “This was an event that’d been going on for several days. Why couldn’t they wait to get things in order?” Chanin questioned. “It was not an event like a riot or an act of violence where you have to respond right away.” The camp raids, the January 28 mass arrest of 409 demonstrators, and much of the city’s reaction to Occupy Oakland, Chanin believes, reflect the habit of city leadership to make public safety decisions based on politics rather than citizens’ needs. “It’s exactly why the department is in the trouble it is — OPD needs to be depoliticized, period,” he said.

The Oakland Police Department, City Administrator Deanna Santana, and Mayor Quan did not respond to requests for comment on the Bureau of Field Operations report or potential conflicts of interest in IAD’s investigation.

There is no set timeline for the conclusion of the various investigations into OPD’s responses to Occupy Oakland. The court-appointed Independent Monitoring Team is expected to release its report on Occupy Oakland sometime before July. In the meantime, city leaders appear to be relying on the Frazier Group’s probe to clear the air around Occupy Oakland. Police Chief Howard Jordan recently requested a $250,000 increase in the Frazier Group’s $100,000 contract to help deal with the volume of complaints received since last fall, making the consulting firm’s contract one of the city’s largest — though it’s still much smaller than the $1.8 million, two-year contract held by Police Performance Solutions, the firm headed by Independent Monitor Robert Warshaw.

Feel the Burn: Heat Wave Makes Us All Crazy