The good news is that it’s finally raining! The bad news is there will be no Oakland First Fridays tomorrow due to the weather. Organizers just announced that they are officially canceling the street festival: “We will miss you, but are happy for the rain.” Indeed.

But you should still come to downtown tomorrow — Oakland Art Murmur, the open-house gallery portion of the first Friday activities, is scheduled to happen as usual. 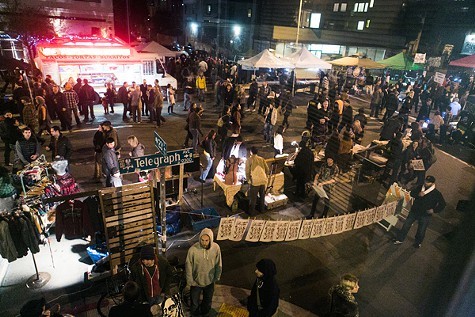 From the folks at First Fridays, here some alternative things to do tomorrow:

Indoor activities such as the Oakland Art Murmur art walk and 25th Street Collective will be open as well as countless bars, restaurants and music venues throughout the Downtown, Uptown, KONO, Temescal, Lake Merritt and Jack London Square districts. New restaurants in the KONO district on Telegraph that will be open on Friday include Gogi Time, Hutch, and Kingston 11. For film buffs, The New Parkway Theater will be open for movie lovers of all ages. Art exhibits in the area include Vessel Gallery’s Pareidolia: New Works by Donald Fortescue.

The next First Fridays festival is scheduled for March 7, which, organizers said, will feature a wide range of artists, crafters, musicians, artisan food vendors, and more.