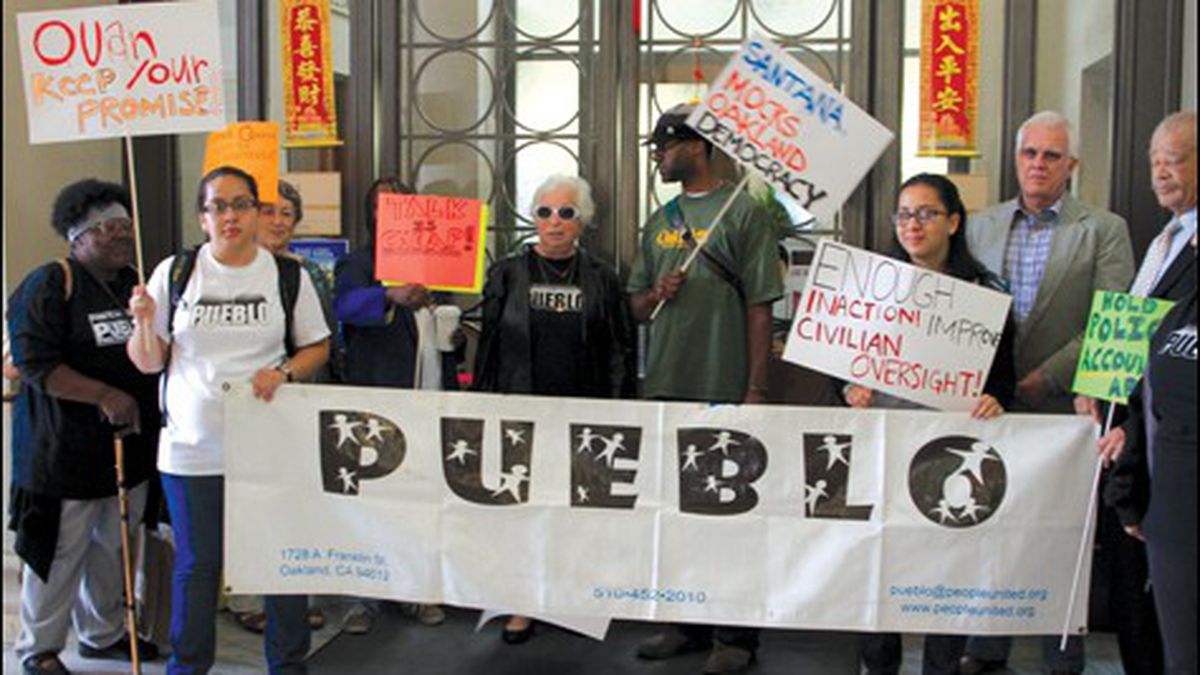 More details surface regarding efforts by Deanna Santana and other city officials to interfere with OPD reforms.

For the first time in years, the Oakland Police Department appears to be making headway in the city’s decade-long struggle to comply with federally mandated reforms. The first report by compliance director Thomas Frazier, issued on July 1, applauded Interim Police Chief Sean Whent for his commitment to the reforms and the wholehearted efforts made by the department to comply with them after years of stagnation.

Yet Frazier’s praise was not unmitigated: He also accused city officials of impeding his staff from conducting their work. In recent weeks, city staff has also drawn criticism from US District Court Judge Thelton Henderson, Frazier, the attorneys who keep tabs on OPD’s federal reforms, and the activist group PUEBLO. Prompted by complaints from Frazier that Don Anders, a former San Jose deputy police chief and a key member of his staff, was blocked by city officials from participating in critical talks about the police reforms, Judge Henderson issued an order at the end of June threatening sanctions if Oakland continued to obstruct the compliance director.

Multiple sources have confirmed that Anders was kicked out of a meeting on the police department’s troubled radio system by Anne Campbell Washington, Mayor Jean Quan’s chief of staff. According to the sources, Anders was also prevented from sitting in on another meeting about software that tracks officer conduct and complaints.

On July 15, the plaintiffs’ attorneys in the Riders misconduct case — John Burris and Jim Chanin — filed a statement with the court, contending that the city’s actions have negatively impacted the police reform effort. In an interview, Chanin said that City Adminstrator Deanna Santana’s stalling of the civilianization of internal affairs complaints and decision to overturn sustained misconduct findings against police are “consistent with her view that criticism of the city and the police department is criticism of her personally.”

Furthermore, Quan is drawing criticism for Santana’s handling of the civilianization of internal affairs complaints, which the council voted to include in the 2011-13 budget, as well as for repeatedly thwarting attempts to discipline police officers accused of misconduct. This reporter has learned that Santana recently overturned two misconduct findings by the Citizen’s Police Review Board (CPRB) — Oakland’s independent police watchdog — against an OPD lieutenant. The city administrator also has been slow to implement reforms of OPD’s internal affairs department that were promised by the city council.

Santana’s actions on the reform of civilianization, and Quan’s apparent refusal to rein in the city administrator, prompted a demonstration by a dozen PUEBLO supporters outside Quan’s office on Monday. “I want someone focusing on interference of staff in refusing to carry out the recommendations of city council,” said Rashida Grinage, PUEBLO’s executive director, prior to the demonstration. After meeting for an hour with Washington on Monday about the civilianization matter and Santana’s conduct, Grinage said that Quan agreed to sit down with PUEBLO on July 30 to discuss the matter further. “It looks like the tail is wagging the dog, that Deanna is calling the shots, and it makes Jean look weak,” said Grinage.

Sean Maher, Mayor Quan’s spokesman, said that the city has completed a “significant amount of work” toward civilianizing internal affairs complaints, and plans to begin recruiting for the new intake positions in early September. The city council set an October 15 deadline for completing this process earlier this year.

Both Quan and Santana have maintained that they need the compliance director’s approval to proceed with civilianizing complaint intake, despite the council’s decision to approve the changes two years ago. On Tuesday, court monitor Robert Warshaw sent an email to Washington, stating that he and Frazier were in support of civilianization.

Frazier has also repeatedly complained about Santana’s actions. According to a report he issued on July 1, city staff had been interfering with his attempts to hire consultants who would help train OPD to abide by court-mandated reforms, and had excluded Frazier’s staff from meetings regarding the computerized system that tracks officer conduct. “These actions have denied me access to critical information necessary to keep abreast of developments on high priority projects and issues,” Frazier wrote. “For most of this reporting period I have been frustrated by city officials’ lack of cooperation, unnecessary restrictions, and control issues which have delayed progress. These roadblocks are not coming from the police department but rather directly from City Hall.”

Under Santana’s leadership, the city administrator’s office has repeatedly exhibited a reluctance to hold police officers accountable. As the Express noted in May, Santana effectively decided to ignore the CPRB’s findings of misconduct against police Sergeant Patrick Gonzales for his role in failing to properly oversee the police officer who savagely beat military veteran Kayvan Sabeghi during an Occupy Oakland protest.

One of the cases involved a complaint filed by Rickey Clay, an activist with Uhuru House in East Oakland. On May 4, 2012, Clay confronted then-Police Chief Howard Jordan during an OPD “Open House.” According to police reports and court statements filed by Lieutenant Alexander and two other officers, Clay got aggressive when Alexander tried to escort him out, and told Alexander, “You want to get some?” Police claimed that Clay also threw punches at the lieutenant. Police arrested and charged Clay with a felony for resisting an officer.

But attorney Yolanda Huang, who represented Clay, obtained independent video of Clay’s arrest that directly contradicted police statements. In the video, which this reporter obtained and viewed, Clay does not accost Alexander. Huang also noted that all three officers had said they activated their chest-mounted video cameras, but when she requested to view the footage, the Alameda County District Attorney’s Office dropped all charges against Clay.

The CPRB upheld Clay’s complaint against Alexander and recommended discipline on May 12. However, Santana decided not to uphold the CPRB’s findings, which was discussed at a July 11 CPRB board meeting.

Santana also overturned the CPRB’s recommendation to uphold allegations against Alexander in a January 2010 incident, in which Alexander was an acting lieutenant and a field supervisor in the Fruitvale district. In that incident, a teenager and his girlfriend were walking home from school when they were assaulted by a group of six people who thought he was the person who had shot their friend some days earlier. They attacked the young man with broken broomsticks, and only stopped when his mother, Lorenza Avila, ran up the street and screamed at them. When police arrived, two of the boy’s attackers were still present, as well as the boy’s mother, uncle, and girlfriend. During questioning, police learned from people associated with the attackers that the injured boy was not the person who shot their friend.

When Alexander arrived on scene, the officers there asked him whether they should arrest the two attackers who were still present. His mother repeatedly insisted that police arrest and charge the boys. However, according to the complaint, after Alexander arrived, police let the attackers go, and no charges were ever filed. Avila filed a complaint with internal affairs on January 27, 2010.

On June 9, 2011, the CPRB sustained Avila’s allegations that OPD failed to arrest the boy. Susan Shaw, who was a CPRB board member at the time, said Santana overturned the board’s unanimous decision to sustain Avila’s complaint.

“It was so obvious when we heard the whole story,” said Shaw. The board was certain, “beyond the shadow of a doubt” that Alexander’s decision not to arrest the boy’s assailants was wrong.

Editor’s Note: A previous version of this story erroneously stated that deputy city attorney Rocio Fierro had advised Anne Campbell Washington to kick Don Anders out of the meeting about OPD’s troubled radio system. According to Campbell Washington, Fierro did not advise her on the matter.