Cambodian street food in a mall food court in Emeryville. 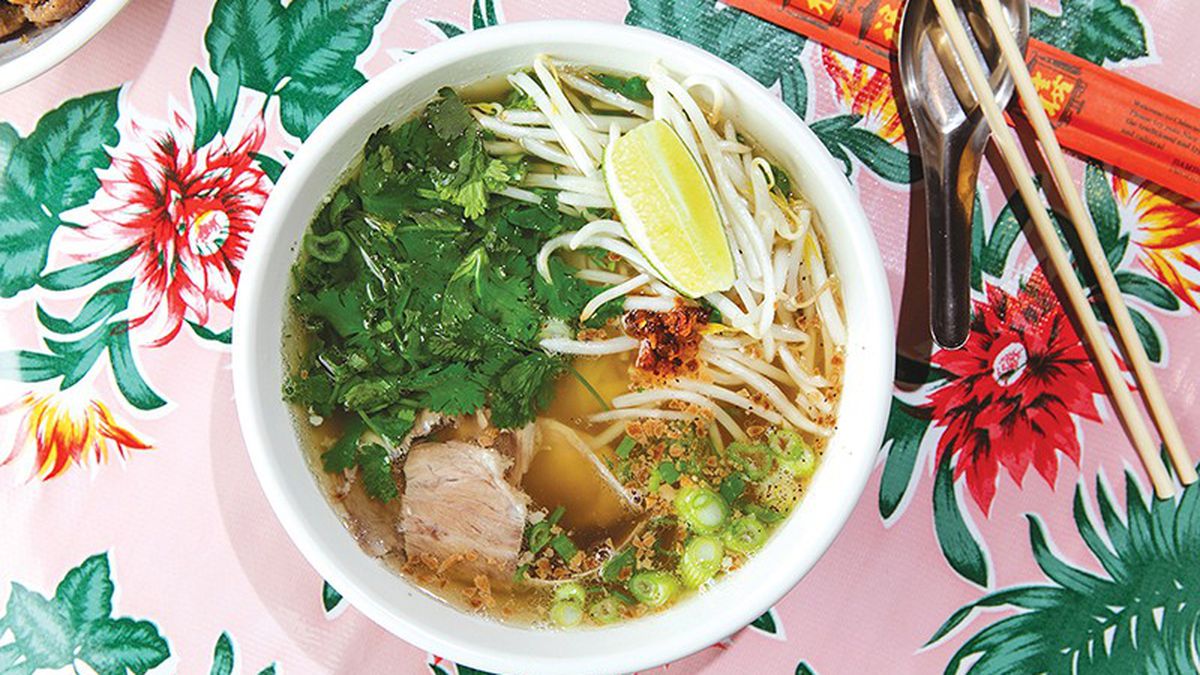 Share
Facebook
Twitter
Linkedin
At this point, we shouldn’t be surprised when great food shows up in some unexpected corner of the East Bay — in a gas station, or a liquor store, or, in Nyum Bai’s case, a hidden-away section of a mall food court.

Nite Yun, a West Oakland resident and a daughter of Cambodian refugees, started Nyum Bai as an occasional pop-up, but for the past two months, it has been open as a semipermanent food stall in Emeryville’s revamped Public Market food court.

Don’t be put off by the kiosk’s rather unfortunate location within the food court, shunted into an otherwise unoccupied corridor that resembles an active construction zone — papered-up walls, and a gaping hole that’ll eventually be occupied by some unidentified storefront. One of the challenges, Yun said, is that customers keep discovering her food stall after they’ve already ordered from somewhere else. (PSA: If you’re coming in from the Public Market’s main entrance, Nyum Bai is located down the hallway to the left.)

The folks who run the Public Market want this specific kiosk to be a kind of “turnkey” pop-up that will rotate to a different up-and-comer every six months. It’s a relatively low-barrier foot in the door for chefs like Yun who are looking to open their first brick-and-mortar spot. Once the six months are up, Yun will have the option of signing a longer-term lease for a different stall. And, the idiosyncrasies of her current location in the food court notwithstanding, Yun says she’d love to keep Nyum Bai at the Public Market. Which is good news for those of us who have discovered Yun’s vibrant Cambodian street dishes, and are well on our way to becoming regular customers.

In the Khmer language, “Nyum Bai” translates to “eat rice” (or, less literally, “let’s eat”), but the restaurant’s main attractions are its noodle dishes — in particular, the noodle soup known as kuy teav (aka kuy tio), or, as it’s listed on the menu, “Phnom Penh Noodle Soup,” which to my knowledge isn’t sold at any of the handful of other Cambodian restaurants in the East Bay. The dish looks vaguely pho-like, with its rice noodles, clear broth, and garnishes like bean sprouts and lime wedge. But where beef-based pho broths are often delicate and slightly sweet, the broth for Yun’s kuy teav was earthy and had an appealing peppery punch.

Anyway, it’s better, and more accurate, to think of this Cambodian noodle soup as its own thing altogether. According to Yun, the broth gets its richness from a ton of pork bones, plus chicken feet, dried squid, and a big hit of black pepper. (In fact, Cambodia is where what are arguably the best peppercorns in the world are grown.) Each bowl is topped with ground pork and slices of roast pork shoulder (the slight dryness of which was my only quibble with the dish), fresh herbs (mostly cilantro), and crispy fried garlic.

In Cambodia, Yun explained, kuy teav is sold by street vendors and is especially popular as a breakfast food. At $11 a bowl, Nyum Bai’s version makes for a fairly unimpeachable everyday lunch or dinner. The restaurant also serves a vegetarian kuy teav, but it wasn’t available during either of my visits.

Cambodian food doesn’t get a lot of mainstream recognition in the Bay Area, so newcomers to the cuisine may feel a natural impulse to compare the dishes at Nyum Bai to other, better-known Southeast Asian dishes. You have to squint pretty hard to see pho in the Phnom Penh noodle soup, but Yun’s kuy teav cha — a stir-fried noodle dish — wasn’t too far removed from pad Thai, with its sweet-and-savory base of tamarind, fish sauce, and crushed peanuts. But the thing that gave me life was the runny-yolked egg, which was cooked how many of the Asian home cooks I know like to fry their eggs — in smoking-hot oil so that the whites puff up and get frilly and crisp at the edges.

The pork and bai (rice) set was a rice bowl that had many of the same components as the kind of grilled-pork-chop rice plate that you can order at almost any Vietnamese restaurant in town. It featured cucumber slices, that same gorgeous fried egg, and pieces of grilled pork that were especially succulent. (The key, Yun said, is the marinade, which includes garlic, black pepper, coconut milk, palm sugar, Maggi seasoning, and Golden Mountain soy sauce.) The set comes with a side of pork broth that you sip with your meal, adding another savory element to balance out the slight sweetness of the pork.

This is the kind of thing that Nyum Bai specializes in: compulsively eatable comfort-food dishes. I liked the rice bowl so much that I’d be hard-pressed to order anything else — especially if I can convince a dining partner to go halfsies on that and the Phnom Penh noodle soup.

For those who crave heat, any of the above dishes would benefit from the addition of “Mama Teav’s Chili Garlic Oil” — Yun’s boyfriend’s mother’s recipe — which added a low, back-of-the-throat burn to the toastiness of crispy fried garlic. A little tub of the stuff only costs $0.50, and whatever’s left over will improve any number of foods — say, a bowl of plain rice or a packet of instant ramen.

Yun cooks traditional Cambodian recipes and doesn’t describe her food as California cuisine, but says that her cooking is of course influenced by her use of local, often organic produce. Her Khmer chicken salad is a good example: Bright and refreshing, it diverged from from the kind of salad you might find in Cambodia in its use of two different kinds of cabbage, and watermelon radishes that had been cut into little matchsticks.

The salad will be an appealing light lunch option once the weather starts to warm up, as will another of my favorite dishes — the Kampot cold noodles. This was one of the most intriguing cold noodle dishes I’ve had in recent memory, starting with its unusually springy, al dente rice noodles and its dressing of coconut milk, sweet fish sauce, and vinegar — layers of flavor that revealed themselves with each successive bite. Slices of lemongrass beef, still hot off the grill, provided a nice contrast: cool and hot, savory and sweet.

Mall food court or not, Nyum Bai is a restaurant with big ambitions. Slowly but surely, the menu has expanded. Yun says she’s working on adding a classic Cambodian dessert called banh ja’naeuk, which are rice-flour dumplings stuffed with mung bean and green onion. And she just started serving fried chicken every Sunday — bone-in pieces that are lightly battered and served with a lime dipping sauce.

When I first talked to Yun about her then-occasional pop-up last year, she spoke of her frustration at how the only thing that most Americans associate with Cambodia is the Khmer Rouge genocide and, perhaps, some pictures they’ve seen of the Angkor Wat temples. She started Nyum Bai, in large part, to combat those stereotypes — to make a compelling argument that Cambodia shouldn’t be defined only by those things, but also by its rich food culture and its Sixties’ psychedelic rock music.

Food, when it’s at its most interesting, is political in just this way, even when it doesn’t mean to be. How lucky we are in the East Bay, then, to have a restaurant like Togi’s Mongolian Cuisine to school us, so deliciously, on how Mongolian food doesn’t have anything to do with buffet-style barbecue, or a place like Katalina’s Island Grill, to teach us that real Polynesian food blows tiki out of the water.

And how lucky we are that Nyum Bai is here now, and hopefully for years to come, to rep Cambodia loud and proud, and to expand our vocabulary of Asian noodle soups.