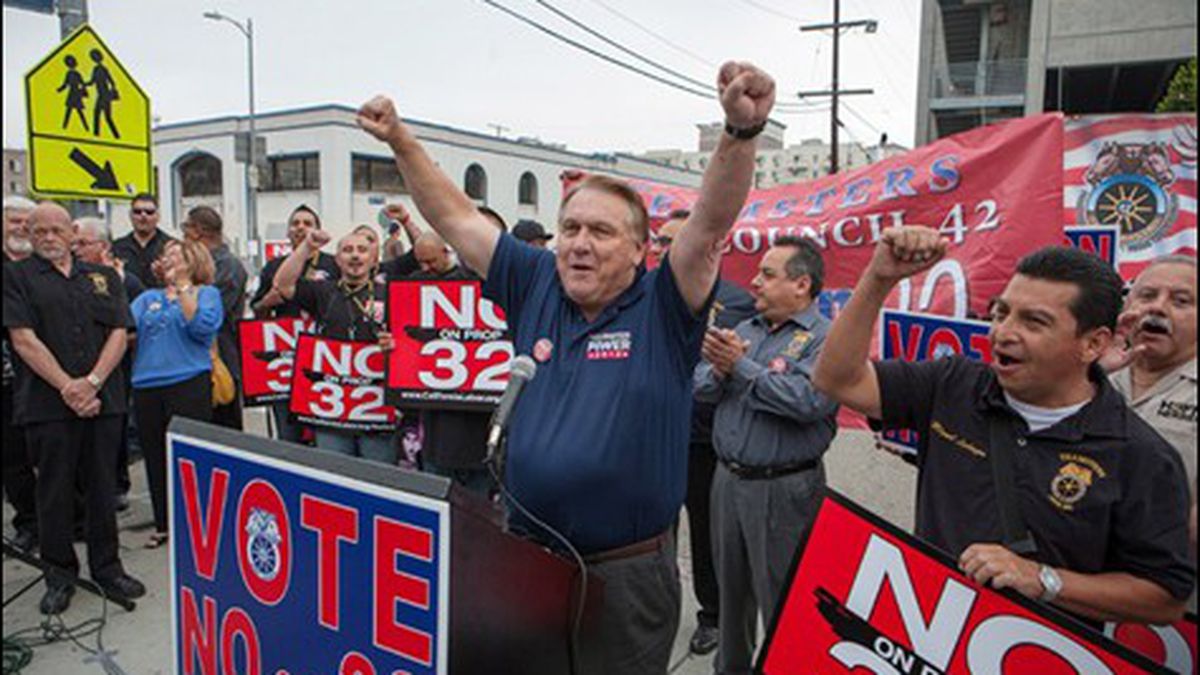 New Lipstick on an Old Pig

Prop 32 is the latest attempt in a fifteen year-old campaign to gut working people's political power in California.

Backers of Proposition 32 are portraying it as a fresh, nonpartisan attempt to clean up California’s political system. But the statewide measure, in fact, has origins that date back both to legislation crafted fifteen years ago by conservative lawyers and to a pair of propositions that sought to ban unions from taking part in what has become the most important part of the political process — raising and spending money. Although voters rejected those previous measures, wealthy corporate interests have decided to return to the ballot box again this year with Prop 32, an initiative that not only is similar to the previous two, but, in some ways, much more extreme.

The idea that eventually led to Prop 32 was hatched in the late 1990s by right-wing attorneys paid by the corporate-funded American Legislative Exchange Council (ALEC). They wrote anti-union legislation that was inspired by conservative charter school activists in Orange County who put a proposition on the California ballot that would have radically undermined union participation in state politics. Backed by then-Governor Pete Wilson, Proposition 226 sought to prohibit unions from using member dues for political purposes. It was funded with five- and six-figure checks from a handful of uber-rich conservatives like Carl Lindner, Richard Scaife, and Jerrold Perenchio. Voters, however, defeated the measure by a seven-point margin.

In 2005, some of the same corporate elites returned with Proposition 75, this time using Governor Arnold Schwarzenegger as their salesman. They polished the proposition through ALEC’s national network of anti-labor lawyers, but Prop 75 was basically the same as Prop 226. It would have undermined unions’ abilities to use payroll deductions to fund political expenditures. And California voters rejected the measure by the same seven-point margin.

Although Prop 32 is being billed by supporters as being more even-handed than Props 75 and 226, it, in fact, goes beyond the longtime conservative strategy of requiring unions to obtain annual written consent from their members before using paycheck deductions on political campaigns. Prop 32 would enforce an outright ban on union money in politics by making it illegal for unions to give contributions to candidates. .

Prop 32’s sponsors also seem to have learned from the prior defeats. This time they’re soft-pedaling the anti-union measure as one that targets all “special interests.” The wording of the proposition implies that it would ban both union and corporate contributions to candidate committees, thereby stemming the flow of both labor and corporate dollars in elections. But legal experts who have analyzed Prop 32 say this is disingenuous.

“This measure disproportionately affects unions,” said Michael Salerno, associate director of the Center for State and Local Government Law at UC Hastings College of the Law in San Francisco. “There’s a saying in the initiative business — you’ve got the sizzle, and you’ve got the beef. The sizzle is the stuff that appeals to voters, like ‘contractors shouldn’t be able to make contributions to politicians who are making decisions on their contracts,'” said Salerno, describing one seemingly balanced feature of Prop 32. “That’s the sizzle,” the reasonable and balanced intent of a law that, in fact, won’t actually have much impact. “The beef is: Unions can’t use payroll deductions to get political contributions from their members. Corporations don’t use payroll deductions from their employees. They just use their corporate resources,” said Salerno.

In other words, Prop 32 would slightly restrict the channels through which corporations can funnel their money into the political process, but the measure would absolutely cut off union money because it outlaws the one method available for unions to raise dollars on anything approaching the same scale as businesses and wealthy individuals — paycheck deductions.

“What makes labor powerful is that aggregation,” said Edwin Bender, executive director of the National Institute on Money in State Politics. “Labor is able to aggregate the small contributions of its members through paycheck deductions to have a seat at the table alongside big business.” Even so, Bender said labor unions are still overshadowed by the influence of corporations. “When you add up all the business dollars together spent in a typical state election, to get a picture of the people on the other side of table from labor, labor always ends up being dwarfed by five to seven times or more.”

This is true in California. Although unions like SEIU, AFSCME, and the California Teachers Association are among the largest single sources of campaign contributions, many more corporations rank equally high. And when you add up all the union money and compare it to the dollars corporations spend to elect and influence state and local leaders, unions, it turns out, are not at all in the driver’s seat.

This year, for example, none of the top five contributors to candidates and committees in California are unions: Two are tobacco companies, one is a hedge fund manager, another is Molly Munger (whose wealth is mostly inherited from her father, the vice chairman of Berkshire Hathaway), and the fifth is the American Cancer Society.

Data from the National Institute for Money in State Politics show that corporations have spent roughly $108 million on this year’s elections in California, while labor unions have contributed only about $30 million. And $8 million of labor’s total has gone toward defeating Proposition 32. The dollar-for-dollar big picture then, is that unions are significantly weaker than corporations and wealthy individuals under the current system.

Ken Jacobs, chair of the UC Berkeley Center for Labor Research and Education, said it’s important to keep in mind that unions are raising money from thousands, even millions, of members, while corporations and the wealthy are representing much smaller, more elite interest groups, making comparisons between the two adversaries inappropriate. “What unions do is aggregate small amounts of money from lots of people,” Jacobs noted. “This enables working people to come together in politics and have some say, to be a counterbalance.”

Jacobs also said it’s imperative for voters to also understand that Prop 32 threatens much more than union political representation. “I think it’s really important that people appreciate what it is that labor fights for,” he said. “When we step back and look at the role unions played in increasing the state minimum wage, for example, that’s something union members weren’t directly affected by, but that’s something all workers in California have benefitted from, with the biggest impact on non-union workers.” Jacobs added: “That’s true for a lot of the protections unions have fought for. Unions continue to fight for public education, labor standards, environmental standards, things like tax fairness, maintaining our anti-poverty programs, occupational health and safety. There’s a whole slew of areas where labor has pitched in to improve the quality of life for all Californians.”

It’s this wider agenda of undermining democratization, equality, and environmental justice that might explain the motives of some of Proposition 32’s biggest funders. Like previous efforts to gut union power in California, Prop 32 is funded by conservatives whose agenda stretches far beyond conflicts between workers and management over wages and benefits.

For example, Carl Lindner, a major backer of 1998’s Prop 226, was the owner of the Chiquita Banana Company. Lindner’s opposition to environmental regulation and labor standards ran so deep that his company was accused by the US State Department of secretly using banned pesticides and hiring a paramilitary outfit classified as a “terrorist organization” to attack plantation workers and forcibly displace villagers near its Colombian land holdings.

Prop 32 has similarly extreme funders whose goals stretch far beyond a desire to limit collective bargaining, and who perceive unions as impediments to their larger agenda. For example, Howard Ahmanson, one of Prop 32’s biggest funders, is well-known for his anti-gay crusades. He has spent millions supporting homophobic politicians and ballot propositions like Proposition 8, and, at one time, belonged to a Christian sect that advocated the death penalty for homosexuals. He once explained his overarching political goals as the “total integration of biblical law into our lives.”

“Prop 32 is part-and-parcel of an agenda to move the state and nation to the right,” said Jacobs. “This comes partly from interest in pushing for privatization which unions oppose, but also pushing for deregulation, reduction in environmental laws, and other areas where unions have helped to serve as a counterbalance to corporate America.”&#8;

Camp Out at the Oakland Zoo