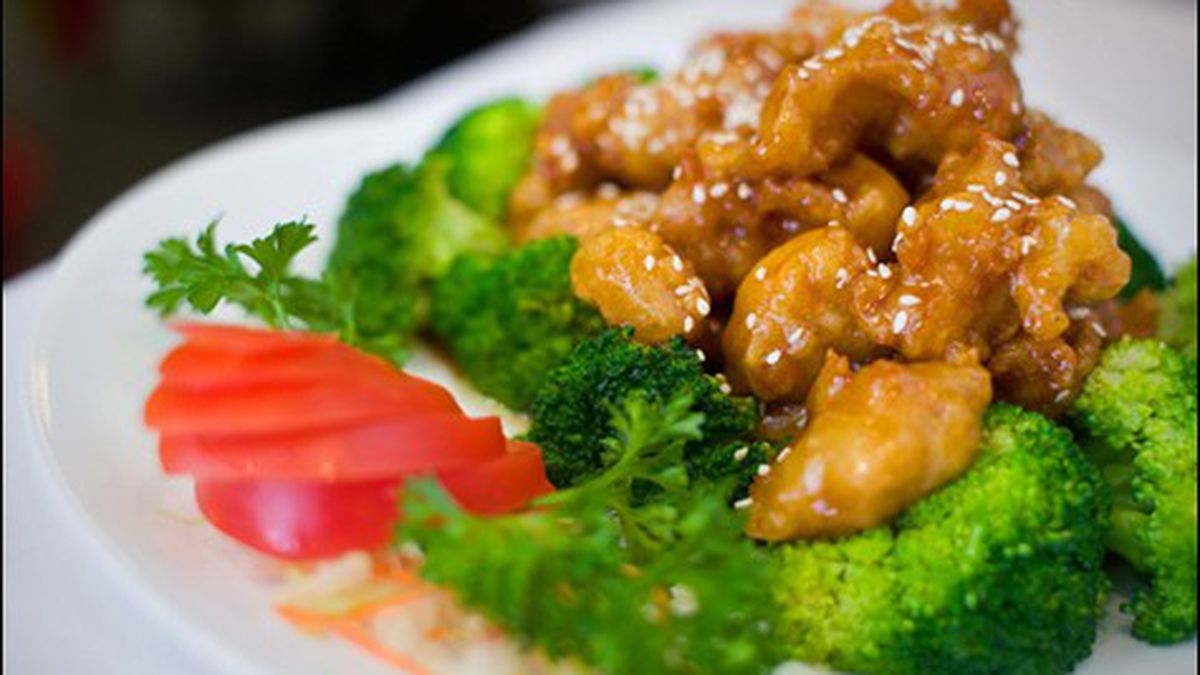 Nature Vegetarian Restaurant and the Unexpected Pleasures of Fake Meat

In an early issue of Meatpaper, the San Francisco-based magazine dedicated to meat culture, self-described on-again, off-again vegetarian Heather Smith refers to fake meat as “the wine cooler of vegetarianism.” Eating the stuff makes her feel trashy, she writes — like she’s “chowing down on false consciousness, pressed into convenient patty form.”

I’ve heard vegetarian friends express similar sentiments — along the lines that it’s silly, if not downright offensive, to assume there’s nothing they desire more than to feel like they’re eating chicken or pork. At best, Americans have an uneasy relationship with meat substitutes, the mass-produced versions of which seem to exist primarily so that vegetarians can participate in cookouts and backyard barbecues — not because they’re any kind of delicacy in their own right. (Have you tasted a Tofu Pup lately?)

The Chinese, on the other hand, have a more comfortable history of mock-meat consumption, harking back to food served to alms-givers at Buddhist temples a thousand years ago. And so a strand of vegetarian cuisine has developed that relies heavily on various permutations of tofu and wheat gluten, a product made by washing the starch out of wheat flour dough, to emulate the taste and texture of meats found in traditional Chinese dishes — everything from char siu to Americanized favorites like General Tso’s chicken.

Not all of it is delicious. So it was with tempered expectations that I headed over to Oakland Chinatown to have lunch at Nature Vegetarian Restaurant, which opened a couple of months ago on a somewhat desolate stretch of Franklin Street, specializing in fake meat cookery. Right away you notice that there isn’t the typical Chinatown display of animal carcasses strung up in the front window. Instead, handwritten signs (mostly in Chinese) list some of the available wares, including mock roast goose and, intriguingly, a “roast vegetarian pork belly” that was sold out the one time I tried to order it.

Inside, Nature Vegetarian is one of the more pleasant restaurants in Chinatown — clean and tastefully decorated, with a display of lucky red envelopes hanging from pussy willow branches to add just a touch of the festive. Often, serene Chinese flute music plays over the speakers. The dining room is calm and quiet, and service is polite and reasonably English-friendly. And the food, it turns out, is quite good.

During my first visit to Nature, I opted for the lunch special. For just $6.50, you get the soup of the day, a spring roll, an entrée, and a choice of white or brown rice. Glancing over the 28 entrée options, I asked the server for her recommendation, and she touted the sesame chicken, of all things — a terrible sign, normally, for diners seeking authentic Chinese cuisine. Sesame chicken! Guilty pleasure from my Americanized Chinese childhood, sweet-and-sour sustainer of so many late-night study sessions.

But would you believe that Nature’s sesame chicken is one of the best versions I’ve had? The “chicken” — actually fried wheat gluten — was served encircled by broccoli on one side of the plate; the spring roll and two neat mounds of rice sat on the other. The mock meat was flecked with sesame seeds, of course, and while the sauce’s sweet-and-sour tang was classic, the dish wasn’t overly oily or gloppy; it didn’t end up sitting in my stomach like lead. Best of all, the little nuggets of gluten were fantastically crunchy and maintained their texture even as they cooled. Too often, chicken that’s prepared this way ends up dry and stringy. The gluten proved to be a lot more resilient — plus there was no worrying about meat of questionable provenance.

The other components of the lunch plate were also successful. The spring roll likewise offered crunch without all of the requisite grease. The brown rice was excellent — nutty-tasting, the kernels providing a pleasant little pop with each bite. And the hot and sour soup was surprisingly light, with thin rectangles of custardy tofu, crunchy wood ear fungus, and a squishy (but inoffensive) gluten-based pork substitute.

The only disappointment was an order of pot stickers, which were large and purse-like and filled skimpily with cabbage and mushrooms that had been made to resemble ground pork. Vegetarian or not, these just weren’t cooked properly: The bottoms had barely been browned, so mostly I ended up eating flabby dumpling skin.

Nature Vegetarian is run by chef-owner Jian Liu and his wife Hui Lin, who had opened a dim sum house called Lucky & Lucky in the same location several years ago. They sold the place, but bought it back this year with the intention of re-opening as a vegetarian eatery. Lin explained that she and her husband are both devout Buddhists, so their goal was to open a restaurant that would reduce the taking of animal life and promote good health as well.

Although many Chinese faux meat products are sold commercially, Liu makes all of theirs in-house, using techniques he’s learned, variously, from books, YouTube videos, and years of experimentation.

A return visit for dinner allowed me to sample more of his handiwork. The Wheat Gluten Puff Combination was a assortment of gluten- and soy-based fake-me-outs, all fanned out beautifully on the plate: roast “duck” made from tofu skins; honey-brushed gluten char siu; and, my favorite, wide slices of creamy, soy-sauce-seasoned tofu (not really a meat imitation at all).

Perhaps the most striking dish was the stuffed eggplant: long slices of eggplant stuffed with taro, batter-fried, and shaped to resemble a whole fish (complete with decorative tail fins made from raw eggplant). Our server carved it for us tableside — a nice bit of theater, I thought.

I enjoyed the mellow creaminess of the taro, which was dotted with little specks of shiitake mushroom for added intrigue. Together with the eggplant, the whole thing tasted not one iota like fish. It did, however, taste a thousand times better than a Tofu Pup.