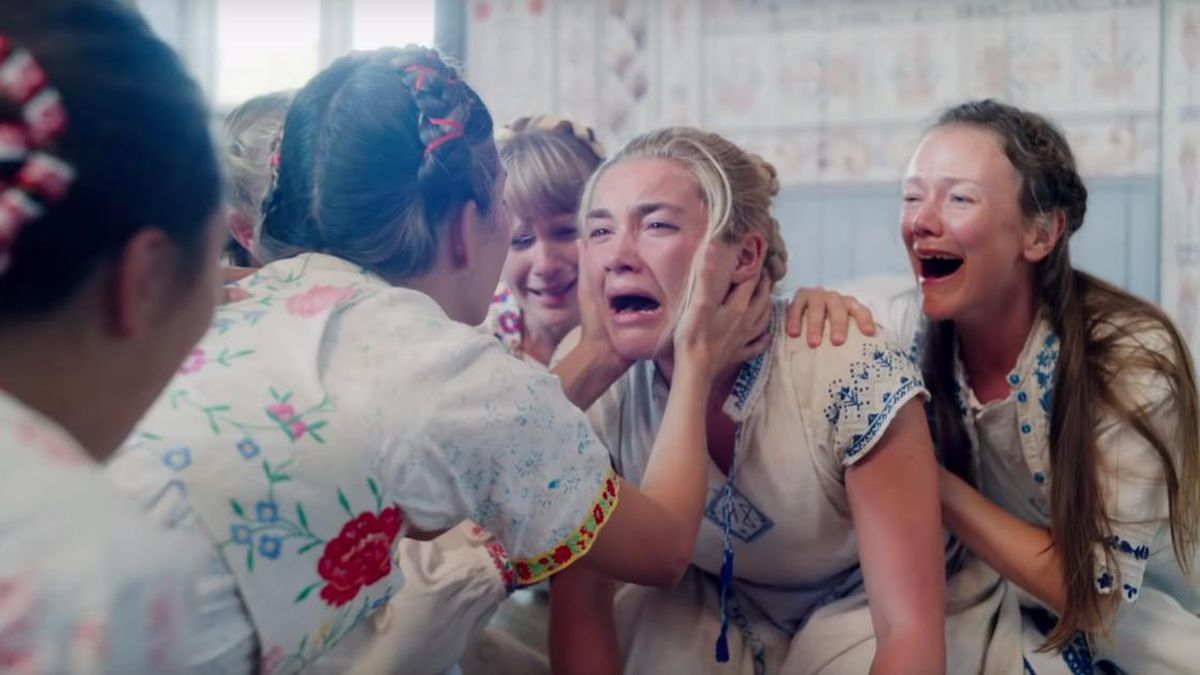 What did Sweden ever do to anyone to deserve this? In Ari Aster’s lurid, exasperating horror item Midsommar, a young American woman named Dani (Florence Pugh) is under fire – mentally, emotionally, physically – for the entire length of the movie. Before she even agrees to the haphazardly planned trip to Sweden with her boyfriend Christian (Jack Reynor), her parents and her disabled sister are suddenly found dead by suicide. Adding to Dani’s shock is the realization that her and Christian’s relationship is in danger of sinking, mostly due to issues of trust.

He’d much rather hang out with his drinking buddies than attend to Dani’s distress. At the urging of their pal Pelle (Vilhelm Blomgren) the boys have planned a bro-style vacation to the Swedish northern outback, ostensibly for anthropological research but mostly to ogle the numerous blonds they’ve heard about. Christian has somehow neglected to inform Dani about the trip, and when she finds out she becomes further unglued. After many tears, she agrees to join the guys.

For the first half-hour of the film it looks as if we’re edging into a character study of a highly strung woman trying to cope with a childish partner in a strange environment – sort of an Antonioni scenario retooled for fans of The Hangover. But writer-director Aster is not the type to have his protagonists sit around inwardly seething. He may toy with interestingly disturbed women characters – as in last year’s Hereditary, with Toni Collette – but we can be certain their frustrations will be sorted out violently and grotesquely.

Dani, Christian, and the three other stooges – played by Blomgren, William Jackson Harper, and Will Poulter – end up in the middle of what they believe to be a quaint, traditional summer solstice celebration by picturesquely-clad villagers (shot on location in Hungary and Utah). However, the eerie songs and increasingly bizarre rituals gradually assume the shape of an impenetrable Euro-nightmare, enabled by organic hallucinogens in a deceptively sunny meadow. Prepare for white mischief.

Pugh’s Dani is the only character with more than one dimension. The English star of Lady Macbeth (2016) has both the demeanor and the emotional range for gothic shenanigans, and when the alarmingly opaque villagers put Dani through a catalog of abuse with extreme prejudice, we suffer right along with her. It sinks in that Christian and his pals are yet another example of the ever-popular die-by-numbers, last-one-standing formula, the only difference being that instead of a cabin in Northern California, we’re treated to a queasy-making Nordic setting ready-made for psychodrama – a sinister Burning Man for vikings, with real rather than symbolic victims.

With the exception of Pugh’s, Harper’s, and the reliable Poulter’s performances, only Pawel Pogorzelski’s cinematography and the screeching music score by The Haxan Cloak are able to jar us out of the stupor brought on by an over-familiar plot. Those, and some grisly visuals. Midsommar’s stylistic antecedents are many and varied: Get Out, The Wicker Man, Cannibal Ferox (among others by Umberto Lenzi), anything by Michael Haneke (dumbed down quite a bit, of course), the cinema of Herschell Gordon Lewis, and, yes, National Lampoon’s European Vacation — picture Chevy Chase’s Clark Griswold, in place of Dani or Christian, reacting to the unintentionally funny pronouncements of those silly villagers, then try to get that out of your mind. Maybe Aster should try his hand at comedy instead.

As is, the movie should probably be able to kill the Swedish tourist industry all by itself. It’s spectacularly weird, but for what purpose? Revenge for ABBA? An irrational hatred for IKEA? Regardless, if you’re visiting somewhere north of Uppsala and you happen to find a stray pubic hair in your soup, don’t let anybody offer you a cup of herbal tea. That would be bad for you, like Midsommar.