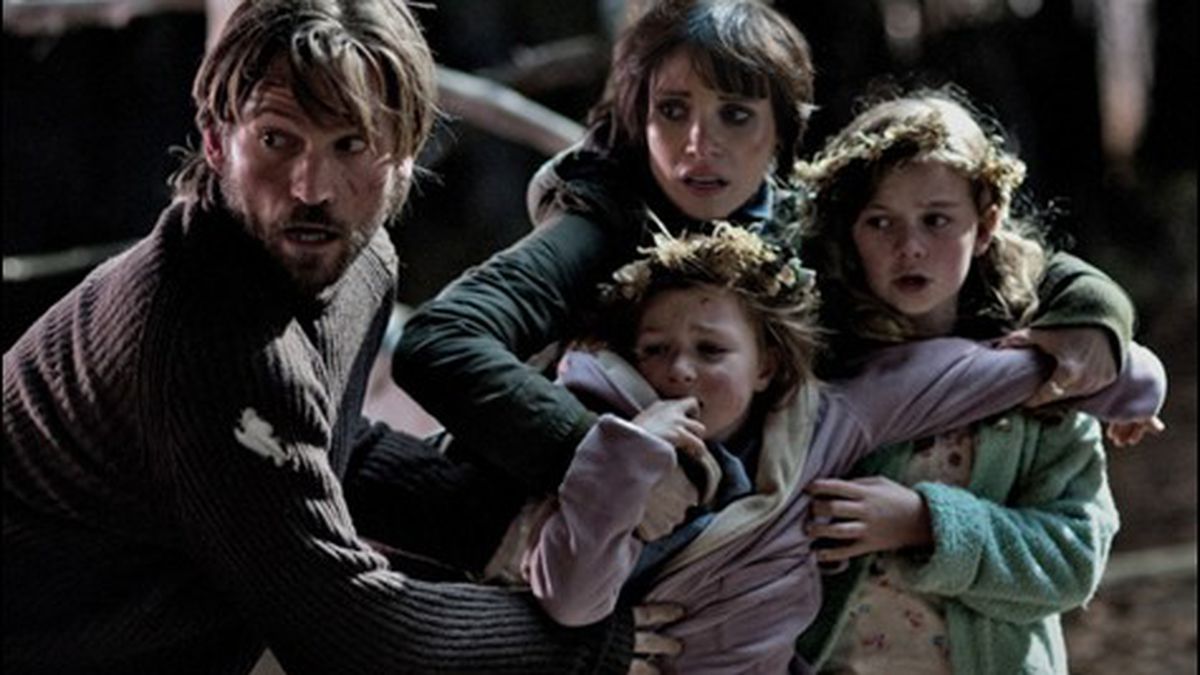 A story within a story within a story. The main protagonists in Andy Muschietti’s Mama are Annabel, a self-centered, tattooed bass player in a rock band, played by Jessica Chastain, and her mild-mannered boyfriend Luke (Nikolaj Coster-Waldau), a struggling illustrator. Annabel and Luke’s existence, like their relationship, is muddling along unremarkably when we first meet them, but the nondescript slacker couple’s lives are about to be turned inside out because of something that happened five years ago in the hills.

At that time, Luke’s brother Jeffrey (also played by Mr. Coster-Waldau), fresh from running away in disgrace from his corporate job — evidently a financial scandal — murders his wife in front of their two toddler daughters, then hurriedly gathers up Victoria (Megan Charpentier) and her younger sister Lily (Isabelle Nélisse), flings them into the family car, and speeds into the twilight on a treacherous, snowy, mountain road as if he intends to kill himself and his family. They end up in the proverbial lonely, decrepit cabin in the woods, where strange things come to pass.

The balance of the unshakably creepy scenario — written by Argentine-born, Barcelona-based international filmmaker Andy (aka Andrés) Muschietti and his sister Barbara Muschietti with screenwriter Neil Cross, adapted from a short film by the Muschietti siblings — shows what happens when little Victoria and Lily, after five long years living in the cabin, are rescued and come to stay with their Uncle Luke and “Aunt” Annabel, who win temporary guardianship of the girls over their stuffy maternal aunt (Jane Moffat). The girls don’t seem to have grown at all during their time in the forest, perhaps because they survived on a diet of wild cherries, but we’ll let that pass.

The kids are practically feral, with matted hair, dirty faces, and a built-in apprehension that causes them to stare off into the nearest dark corner — there’s always a dark corner nearby in this movie — at the slightest provocation. Victoria, elder of the two, gradually readjusts to “normal” life and welcomes her new pair of eyeglasses. However Lily, the wilder sister, scuttles around on all fours like a crazy crab and seems to take her cues from an unseen presence in the shadows.

That’s because the girls are haunted by the ghost of a “mad woman” who lost her child as well as her life in those same woods many years before. Mama — a startlingly grotesque wraith who grows out of a mold spot on the wall, played by Spanish actor Javier Botet from the [REC] movies — has adopted the abandoned girls, and wants them back. Woe to anyone who stands in her way or shows too much affection for Victoria and Lily. We’re looking at a custody battle.

The Muschiettis, with presumed input from executive producer Guillermo del Toro, invest this seemingly routine spooked-children yarn with a bounty of narrative and visual refinements, not least of which is the unaccustomedly dark-haired Chastain’s performance as the reluctant stepmom. Annabel’s initial annoyed dismissal of the orphans gives way to a tenacious maternal devotion that adds real-world emotion to the fantastic goings-on. On the heels of Chastain’s big-screen overexposure in the past year and a half, we were skeptical on seeing her name in the credits, but her acting and the role itself turn out to be unusually fine-grained, better than anything she did in either The Tree of Life or Zero Dark Thirty.

Filmmaker del Toro has always shown a preference for stories of lost children (The Devil’s Backbone, Pan’s Labyrinth, and the upcoming Pinocchio), and to the tough-love scenario he and the Muschiettis bring a coat of classic gothic visual splendor à la Murnau, Dreyer, Lang, and Lewton. The monochromatic night scenes in the forest and on the cliff are enthralling in their light-and-shadow poetry.

Someone needs to go out to that decaying cabin in the dead of night. Annabel is impelled to open that closet door in the dark bedroom where the girls play after midnight, instead of sleeping. Everything in a movie like this depends on the visuals, and when they’re as sure-footed as this, the whole nightmare springs to life before our eyes. Parts of Mama are absolutely terrifying. It will take days, and long winter nights, for the tingle of this enthralling fantasy to fade away.