In her new book, Oakland podcaster Nia King documents the trials and triumphs of queer and trans artists of color. 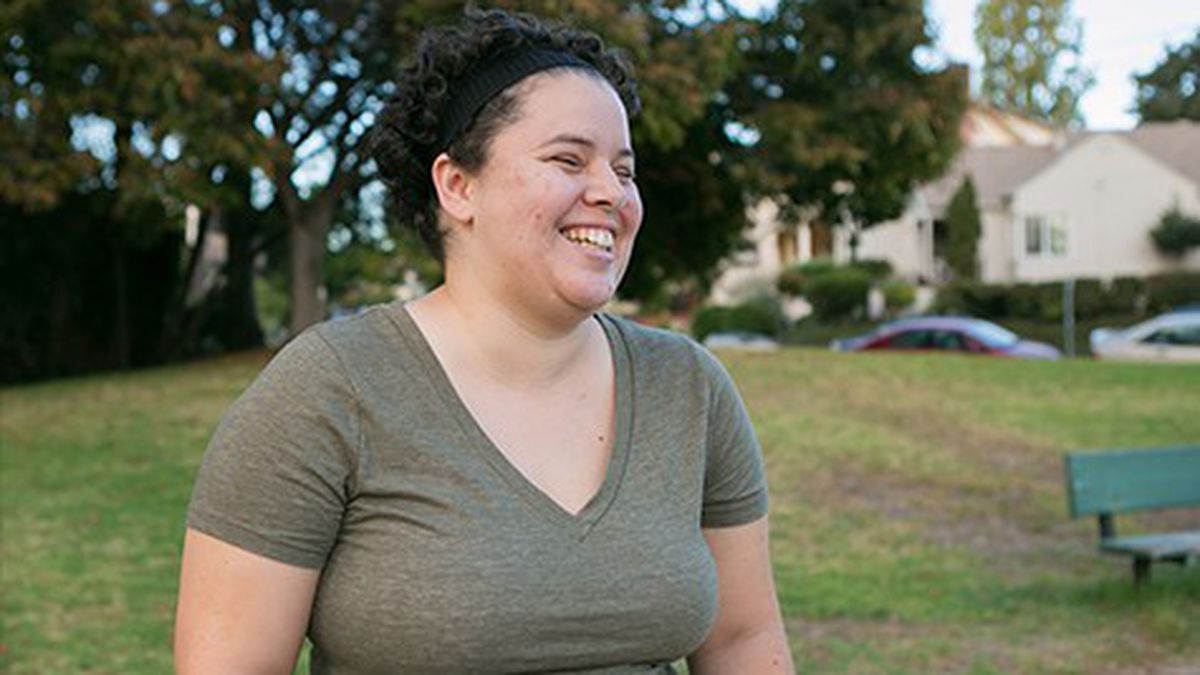 In 2010, when Nia King began researching her ethnic studies thesis at Mills College, she was surprised at how difficult it was to find texts on queer artists of color. She was writing about Mangos With Chili, a Bay Area performing arts company that features LGBT people of color, but she couldn’t track down relevant source materials on this demographic.

“It’s so hard for me to believe this happened,” she recalled. “But I talked to the librarian at Mills and he was like, ‘This is an old system so some of the search terms are really dated. And you might actually have more luck looking for terms like homosexual and Negro.'” She found one academic book on gay artists of color, but nothing on the topic that was accessible to a wider audience.

King, a 27-year-old queer, mixed-race artist, is hoping to help fill this void with her new book Queer and Trans Artists of Color: Stories of Some of Our Lives, a collection of interviews with eighteen artists, mostly from the Bay Area. The book, which she has self-published through Amazon’s CreateSpace platform, is adapted from her podcast, We Want the Airwaves, on which she conducts interviews with queer artists of color.

The 235-page collection — which King is releasing at a launch event on Friday at the downtown Oakland venue Show and Tell — features a diverse mix of queer and trans artists, including writers, performers, musicians, and visual artists. In these wide-ranging conversations, she touches on a number of topics, including racism, homophobia, the value of art school, the role of art in activism, and the financial struggles of many artists.

The most nationally recognizable interviewee in the book is Janet Mock, a trans advocate and the author of the memoir Redefining Realness. But many of the people King features are well-known in Bay Area activist and queer communities, such as Virgie Tovar, an author who lectures on body image and fat discrimination, and local drag queen Miss Persia, whose catchy, anti-gentrification song “Google Google Apps Apps” went viral last year. The song featured music group DADDIE$ PLA$TIK, members of which are also interviewed in the book.

“I just want the talented, hardworking people that I see in my community who are underpaid and undervalued to receive their rightful place in history,” said King, who lives in Oakland and is also an illustrator and filmmaker. “There is so much cool stuff happening in the Bay Area specifically around political art by queer people of color. … I would like to help put it on the map. I’m hoping that’s what this book does.”

King first got the idea for her podcast a few years ago when she was listening to an episode of Marc Maron’s podcast, WTF, that featured the Pakistani-born standup comedian Kumail Nanjiani as a guest. The intro to the segment, she recalled, included a racist impersonation of a Moroccan woman and xenophobic jokes about an ethnic grocery store. She felt that, at least in terms of issues of race, she could do a better job interviewing people of color.

While researching her thesis, King had also become increasingly interested in finding ways to document queer spaces in the Bay Area, especially cultural institutions falling victim to gentrification, such as the gay Latino bar Esta Noche in the Mission, which closed earlier this year. “I want to document queer and trans people of color’s creative cultural production and also these institutions that they build that may not be very long-lived or very well-resourced, but actually do change people’s lives,” she said.

In March 2013, King launched her podcast, dedicating herself full-time to interviewing local artists, many of whom she considered role models. She began picking their brains about the hustle of surviving as working artists in the Bay Area while also documenting their accomplishments and struggles through lengthy conversations. She has since released 34 episodes. New episodes are free and downloads of older episodes are two dollars each.

The podcast, has at times become very personal, broaching subjects such as rape, trauma, violence, and cancer. “I love podcasting, because it’s really intimate,” King said. “And I’ve been really impressed … that people seem so willing to open up to me.”

King’s conversations can also be a refreshing break from mainstream interviews of LGBT people and artists of color, which often follow a predictable and problematic line of questioning. The comic Aziz Ansari, as King noted in her book, has talked about how much he hates the question: “What’s it like being an Indian comedian?”

“You don’t usually get to hear stories from us,” said San Cha, an Oakland-based singer with DADDIE$ PLA$TIK. King’s work, she said, is a way for queer artists of color to recognize that “we are not alone.”

As her podcast grew in popularity, King began hiring people to transcribe the podcasts so that the interviews could be accessible to deaf audiences. A book eventually seemed like a logical next step, she said, especially considering the lack of literature on art in queer communities of color.

“I want to establish this as a credible field of study and important work. And I really hope that people use my work as a building block,” said King, who has already spoken to professors at a few colleges who plan to teach her book.

King has been working on the book for about a year with the help of two friends and co-editors from Mills, Jessica Glennon-Zukoff and Terra Mikalson. The final product is more than just an archive of compelling interviews. As a whole, Queer and Trans Artists of Color is a nuanced exploration of the value of art in community organizing and activist causes that matter to LGBT people of color. After helping edit the book, Mikalson said, “I now see art as integral to social justice movements.”

Julio Salgado, an illustrator and immigration activist interviewed in the book, said that art is undervalued as a tool for marginalized communities. “For Nia to put this into one package, someone who is part of our community can read this and know, ‘I can use art to heal,'” said Salgado, who was born in Mexico and lives in Berkeley. “We grow up thinking art is not for us or art is for a certain type of group, but I want people to know that art is valuable. We can make art out of some of our struggles.”