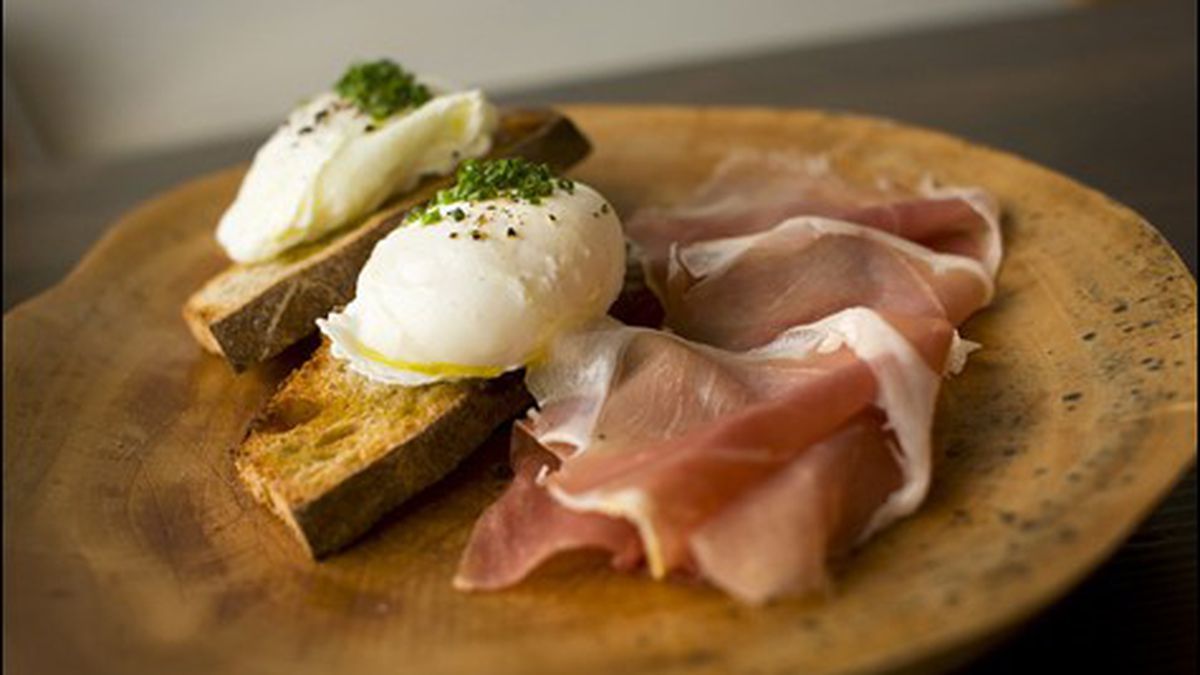 Like “natural” or “healthy,” “local” is a word that’s lost impact through overuse. As the demand for locally sourced ingredients shifted from farm-to-table activists to casual weekend foodies, local became an annoying buzzword, ripe for its own satire. But Local Cafe, the newish Piedmont venture of co-owners Megan Burke and David Crombie, has staked out a refreshingly homey reclamation of the word. Though the menu bears requisite nods to local sourcing, Local Cafe is named more for an open-door approach to its neighbors than a dogmatic adherence to locavore principles.

On my first visit, Crombie poked his head outside to share unwritten specials with a handful of window shoppers. What could have seemed like desperation from a too-eager proprietor instead felt inviting. There was a pleasant hint of the small-town shopkeeper interfacing with his neighbors; in the end, everyone funneled inside for a morning meal.

Designed by chef Colin Etezadi (formerly of Boot and Shoe Service, Camino, and Pizzaiolo), Local Cafe’s menu beckons with a beguiling simplicity. Breakfast is poached eggs, French toast, and granola, while lunch skews toward salads and sandwiches. After years of bouncing around the post-Panisse restaurant empire, Etezadi was ready to make some grilled cheese and Cobb salad.

That’s not to say the menu aims low: Some of Etezadi’s treats hit comfort food’s glass ceiling, limited only by constraints of the genre. Take his near-transcendent ham, egg, and cheese biscuit. Deciding he could do better than San Francisco’s Black Jet Bakery (his original source), Etezadi makes the golden buttery biscuits in-house. Inside each one, Swiss cheese and ham top a smooth egg custard, made by baking an egg and cream in a water bath. Unlike some uptown re-imaginings of junk food staples, Etezadi’s finished product still resembles an Egg McMuffin. It’s just much, much better.

Similarly, his spin on a tuna sandwich is sophisticated without ignoring convention. Etezadi prepares a tuna confit by slow-cooking batches of fresh albacore in olive oil with a touch of orange zest. He mixes in celery, chives, tarragon, chervil, capers, and a bit more oil. Spooned onto a soft Acme roll, the rich tuna melts on the tongue; romaine lettuce adds crunch and pickled shallots a bit of pucker.

Soups and salads also shine here. A lightly dressed fennel and frisée salad is speckled with sweet mission figs and toasted hazelnuts. This one is tall and handsome, delicately mounded like a risen soufflé. Also comely are the wee espresso mugs of soup served with some sandwiches. Mine was a basic tomato, lightened by slow-cooked yellow onions and a dollop of chive-dotted crème fraîche.

Other items are less interesting, even while using top-shelf ingredients. The Niman Ranch-sourced hot dog is exactly what it sounds like: pork on a bun. Served with coarse-ground mustard and seasonal pickled veggies (carrots and cauliflower at my visit), it fails to surprise. Same goes for the grilled ham and cheese; mustard and pickles don’t distract from the fact that you’ve eaten this sandwich many times.

That’s not a discredit to Etezadi’s craft, however. Reading straight from the chef’s handbook, he says his goal is simply to create “honest food for real people.” But when a chef raises the bar on some dishes, all expectations are heightened.

Menu items rotate weekly, though items like the tuna are fast becoming standbys. Etezadi is a born experimenter, and Local Cafe gives him a chance to tinker. A recent dish of prosciutto and poached eggs on garlic toast packed too much garlicky burn for a breakfast item. A noble effort, but it may not last. Etezadi also swaps items based on produce seasonality; don’t expect the tomato soup to stick around.

The menu is strong, but the food’s appeal is borne up by a warm space. Local Cafe’s interior accommodates thirty: two-tops and four-tops ring the walls, a six-person picnic table anchors the center, and a quartet of seats lines the counter. Aggressive sun drenches the interior most days, bullying through the protective window shade. White walls are punctuated with a handful of abstract paintings. The salvaged wood furniture is classy, approachable.

Local Cafe’s customer mix reflects a broad appeal. On one visit, a small girl belted out an impromptu operetta from the floor, while a twentysomething bookworm read over a bowl of soup. An older couple sat nearby holding hands, while a hung-over quartet let their iPhones preempt conversation. It was an evolving tableau, and for every table that paid their bill, another group would wander in as if on cue.

In a space this small, Crombie’s presence looms large. He seems to be everywhere, encouraging the little opera star to keep singing, catching up on neighborhood gossip, putting out small fires. Burke first met him five years ago, after he moved to Oakland to help start the upscale deli/market, Mulberry’s. He has since worked in catering, played handyman, and tended bar. Crombie admits, “I’m basically the Mikey of Piedmont: If somebody needs a job done, they say, ‘Dave will do it.'” Burke brought him on board as something of an affable front-of-house generalist.

Last Thursday, Local Cafe started dinner service, dimming the lights and rolling away the coffee station three nights a week. Entrées grew more substantial, with items like clams and bacon in white wine and a braised short rib/tri-tip plate. Since late summer, the spot has maintained six days of breakfast and lunch service. It was a tester period, working the kinks out in daylight before trying its hand at dinner. But with its sun-splashed interior and down-tempo coffee-shop vibe, the wee eatery may have stumbled onto its true calling. I only hope that Local Cafe’s appeal as a breakfast and lunch spot doesn’t doom its nighttime endeavors.